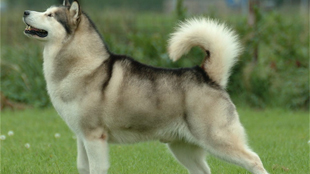 An Alaskan malamuteWIKIPEDIA, SCMWThousands of years ago, a tumor cell from the genitals of a dog evolved into an immortal, free-living parasite. Rather than dying with its host, it gained the ability to spread from one dog to another through sexual contact. This contagious cancer, now known as canine transmissible venereal tumor (CTVT), has spread to dogs all over the world, and it is the oldest known cell line in existence.

Now, a team of scientists led by Elizabeth Murchison at the University of Cambridge has sequenced the genomes of two CTVTs. Their results, published today (January 23) in Science, show that this extraordinary cancer first arose around 11,000 years ago. From its genes, the team could even tell that it arose in a medium-to-large dog that looked like a husky or Alaskan malamute, and either had a solid black coat or a grizzled one with light...

“If we found the bones of that dog somewhere, it would have been considered ancient DNA,” said Murchison. “But its cells are still alive and we’re sequencing its DNA today. It’s mind-boggling.”

Earlier studies predicted that all current CTVTs shared a common ancestor between 250 and 2,500 years ago, but the tumor itself is between 7,800 and 78,000 years old. Murchison’s team narrowed that range down to between 10,200 and 12,900 years by considering the total number of mutations in CTVT in the context of the mutation rate of a human cancer: medulloblastoma.

“These predictions of age are difficult, as they are only as accurate as the estimated mutation rate,” said Hannah Siddle from the University of Southampton in an e-mail. “But this work confirms that CTVT is most likely many thousands of years old and this is in line with previous estimates.”

The genomes revealed mutation on a massive scale. Since its days as a dog cell, CTVT has picked up around 1.9 million mutations; by contrast, a typical human cancer has only acquired from 1,000 to 5,000. The team also found around 350 instances of jumping genes landing in new places—2,200 cases where large chunks of the genome had been rearranged, and around 650 genes that had been lost entirely. “It makes you wonder how it’s survived all these years,” said Murchison.

Around half the tumor’s genes carry at least one non-synonymous mutation—one that changes an amino acid in the encoded protein. Surprisingly, around 40 percent of these are of a type that is caused by ultraviolet light exposure. CTVT normally grows inside a dog’s genital orifices, but when it gets big enough to breach the surface (and spread to another dog), it could easily see enough sunlight to pick up UV-induced mutations.

But the team also found that CTVT, despite its history of untrammelled mutation, is now relatively stable. The researchers specifically sequenced two tumors that would be as different as possible: one derived from an Aboriginal camp dog in Maningrida, Australia, the other from an American cocker spaniel in Franca, Brazil.

These two tumors represent lineages of CTVT that separated from one another around 500 years ago, but they look virtually identical. Around 95 percent of their mutations are shared. On top of that, each tumor largely consisted of identical clonal cells. In human cancers, different parts of the same tumor can harbor very different sets of mutations. But the team couldn’t find any hint of these “sub-clones” within the CTVTs.

“There’s not a lot of new evolution going on,” said Murchison. “This tell us that cancers do have this potential to go on living for thousands of years and, given the opportunity, they can become a more stable entity than cancers we usually see in humans.”

“CTVT may represent an evolutionary ‘endpoint’ for a tumor,” said Siddle. “Perhaps the tumor has become perfectly adapted to its niche and is not under further positive selection.”

The CTVT genomes also show that the cancer originated in an isolated dog population that was probably highly inbred. It stayed there for most of its history, before hopping a ride around the world during the age of exploration and global seafaring.

A second transmissible cancer has also evolved in Tasmanian devils, and causes a fatal condition called devil facial tumor disease (DFTD). DFTD has only acquired around 20,000 mutations, but Katherine Belov from the University of Sydney sees many parallels between the two tumors. “Both diseases appear to have emerged in populations with low genetic diversity,” she told The Scientist in an e-mail. “Then, over time, they both evolved immune evasion strategies, and have become remarkably stable cell lines.”

“I think it is really important that we continue to study these contagious cancers,” she added. “They have evolved at least twice. What allows these cancers to emerge, and to become successful and immortal? If we can answer these questions, we will gain insights into human cancers too.”