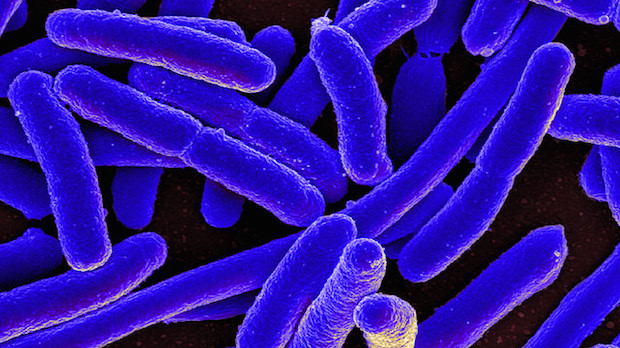 FLICKR, NIAIDTwo synthetic gene circuits allow researchers to keep genetically engineered (GE) microbes alive only under specific conditions, and to kill them when their services are no longer needed. The circuits, described today (December 7) in Nature Chemical Biology, could help pave the path to safe diagnostics, therapies, or environmental remediation strategies that rely on GE bacteria.

“This is yet another step forward towards better biosafety and biocontainment based on certain aspects of existing technology,” said Guy-Bart Stan, a synthetic biologist at Imperial College London who was not involved in the study.

Study coauthor James Collins, a synthetic biologist at MIT, began to design these gene circuits, or “kill switches,” after becoming interested in using GE microbes for diagnostic and therapeutic purposes. “We were motivated to begin working on the topic as synthetic biology has moved increasingly toward real-world applications,” Collins told The Scientist. Other...

But with genetic modification comes the concern that scientists will create new and uncontrollable species that outcompete or share their genes with wild-type organisms, permanently altering the environment or endangering people’s health.

Earlier this year, two research teams led by Yale bioengineer Farren Isaacs and Harvard geneticist George Church showed that they could genetically modify Escherichia coli to incorporate synthetic amino acids into essential proteins. When the bacteria are not fed the amino acids, they cannot produce these essential proteins, and so they die. This strategy yields bacteria that are very unlikely to survive without support from scientists but requires intensive engineering of the bacterial genome. (See “GMO ‘Kill Switches,’” The Scientist, January 2015.)

In contrast, Collins and his colleagues set out to create kill switches that could work in a more diverse range of microbes. “Our circuit-based safeguards can be conveniently transferred to different bacterial strains without modifying the target cell’s genome,” he wrote in an email.

First, Collins and his colleagues generated a kill switch called “Deadman,” named for a locomotive braking system in which the train will only run if the engineer is affirmatively holding down a pedal. In the microbial version of Deadman, a researcher must feed bacteria a substance called anhydrotetracycline at all times, or else the microbes will express a toxin and self-destruct.

The researchers generated a genetic circuit containing genes for the proteins LacI and TetR, a toxin that is only expressed in the absence of LacI, and a protease that degrades LacI. Under normal circumstances, TetR is preferentially expressed over LacI. TetR expression also triggers expression of the protease, which degrades any LacI that has been expressed. Without LacI, cells express the toxin and die. But when the cells are fed anhydrotetracycline, TetR is inhibited and LacI is expressed. LacI represses the toxin and keeps the cells alive.

Other versions of the Deadman circuit can be designed to degrade essential proteins in the absence of anhydrotetracycline, said Collins.

Scientists designing Passcode kill-switches could make hybrid transcription factors respond to whatever combination of small molecules they desired, said Collins. “The strength of our kill switches lies in their flexibility and their ability to detect complex environmental signals for biocontainment.” He noted that companies hoping to keep others from using their cells could keep the recipe for their feed a secret.

But Church warned that Collins’s circuit-based approach might not as effectively contain bacteria as an amino acid-based method, like one his group developed, since the cells are not fundamentally dependent on foreign biology to survive.

“If you need to have the ability to really scale your containment across a number of different species, then I could see the Passcode kill switches would be incredibly valuable,” said Isaacs. “If you are very concerned about escape frequencies and your degree of biocontainment, maybe you’d opt for something where the organism has been recoded and it relies on a synthetic amino acid.”

Still, Stan said the new paper is a demonstration that creating easy-to-insert kill switches based on genetic circuits is feasible. “I think what they wanted to show in the paper is basically that using some existing genetic circuitry . . .  you can obtain biosafety for the here and now.”