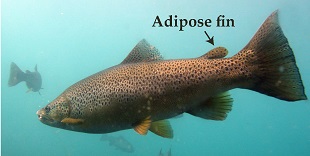 UNIVERSITY OF CHICAGO MEDICAL CENTER, DAN KITCHENS For decades, researchers and marine fisheries managers have considered the adipose fin—a small protuberance between the dorsal and tail fins—a vestigial organ, a relic of a bygone evolutionary era. But a study published today (March 5) in the Proceedings of the Royal Society B shows that bony versions of these structures have evolved independently and from more than one ancestor, suggesting that the adipose fin could play a subtle, yet vital, as-yet unidentified role in fish.

Adipose fins are small, fleshy and usually not as elaborately structured as other fins. Although some 6,000 species of fish—including trout, catfish, and salmon—have them, relatively few researchers have studied these structures in the last half-century.

The researchers were surprised to find evidence to suggest that adipose fins with skeletal structures had evolved in three different lineages. Moreover, the fossil record showed a rich variety in those skeletal structures. “This suggests you’re not limited to a single evolutionary route,” Stewart said.

While the limbs of terrestrial animals evolved from paired fins on ancient fish, it’s difficult to study that relationship because there are no animals with intermediates between fins and limbs today, leaving evolutionary biologists to rely largely on the fossil record. But to Stewart’s mind, because adipose fins are less complex than other fins, these structures could serve as a simplified model for the evolution of limb development. “It can give us a window, maybe, into some of the earlier stages of that process,” he said.

That adipose fins seem to have evolved more than once “allows [for] comparison: you can start asking interesting evolutionary questions,” said evolutionary biologist Michael Coates, Stewart’s advisor and study coauthor. “Tom’s research has lifted the lid on this and found there’s a great deal more to these [fins], and a great deal more diversity amongst these fins.”

Indiana University’s Rudolf Raff, who was not involved in the research, suggested that the team next study the genes involved in adipose fin development.

“They have good evidence here that the adipose fin may be a good model for understanding the origins of limbs and fins,” said Peter Wainwright, a biologist at the University of California, Davis, who was not involved in the research. “They’re essentially charting a course for future research here.”

But Wainwright cautioned that it’s too soon to tell whether this insight can be used to study how limbs and other types of fins developed. “It may just turn out that the origins of adipose fins are somehow unique and different from the origin of other fins,” he said. “We don’t know how good a model it will be. We’ll just have to wait and see how that work pans out.”

Wainwright also noted that the phylogenetic tree Stewart and his colleagues developed relies on just a few hundred of the thousands of teleost fish, which may provide an incomplete picture of the relationships among lineages. But, he added, future versions of phylogenetic trees will likely improve as more fish are studied.

“For now, this gives us a first best pass at understanding this question,” said Stewart.

The study may also have implications for the common fisheries practice of clipping off or tagging the adipose fin to differentiate hatchery-grown fish from wild fish. “We’ve cut these fins off of fishes with the assumption that there’s little to no impact on the animal,” Stewart said. “But if it’s a structure that evolves repeatedly, that suggests that it has adaptive function, then we should be mindful of the practice cutting it off.”

T.A. Stewart et al., “The origins of adipose fins: an analysis of homoplasy and the serial homology of vertebrate appendages,” Proceedings of the Royal Society B: Biological Sciences, 2014.