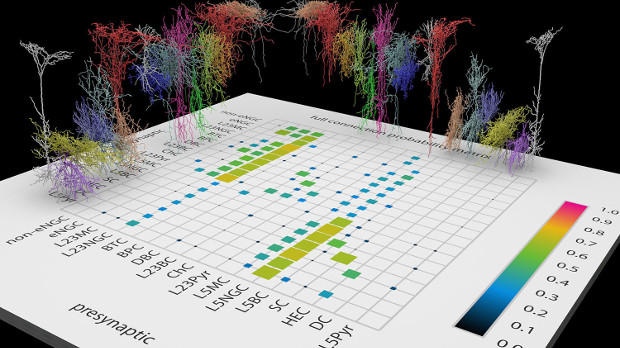 DANIEL BERGER, XIAOLONG JIANG, FABIAN SINZ, XAQ PITKOW, ANDREAS TOLIASThe morphology and electrophysiology of approximately 2,000 neurons in the visual cortices of adult mice have been catalogued, along with the connectivity between more than 11,000 possible pairs of these cells. The resulting census, published in the journal Science today (November 26), reveals a number of new interneuron cell types as well as hitherto unappreciated patterns of local connections.

“I’m incredibly enthusiastic about what these authors have done,” said neuroscientist Giorgio Ascoli of the Krasnow Institute for Advanced Study in Fairfax, Virginia, who was not involved in the work. “It’s a truly impressive tour de force in terms of optimization of every experimental and analytical detail.”

“The amount of work that went into this is really amazing,” agreed Arthur Toga, director of the Laboratory of Neuro Imaging in Los Angeles who also was not involved in the study. “They...

The murine neocortex—the outermost part of the cerebral cortex—is involved in higher brain functions such as sensory perception, conscious thought, language and reasoning. To determine how such complex functions arise, researchers must first understand the neurons present in the tissue—their characteristics and their connections. Two main types of neurons—excitatory neurons, such as pyramidal cells, and inhibitory interneurons—are present in the neocortex, but while the pyramidal cells are fairly stereotypical and well characterized, the interneurons exhibit exceedingly diverse morphologies and there is no consensus as to how many different types exist, let alone how they interconnect.

Adding to the difficulty of studying interneurons is that they continue to develop throughout adolescence into young adulthood. Electrophysiological analyses, however, are generally performed on juvenile brain tissue specimens because they tend to be more tractable and resilient than adult samples.

Andreas Tolias at the Baylor College of Medicine in Houston and his colleagues decided to tackle these challenges head-on. “I know that others have been talking about it and thinking about it, but I guess we just decided to do it,” he told The Scientist. “We thought it was a lot of work, but it could be done.”

First, the researchers optimized an existing protocol for slicing and preparing adult brain tissue ensuring that they could robustly record electrophysiological data. They then pushed the recording potential to the limit by simultaneously probing eight cells in each brain slice. This technique, called octuple whole-cell recording, is “tremendously difficult and challenging,” said Hongkui Zeng of the Allen Institute for Brain Science in Seattle who did not participate in the study. “Only a few people in the world can do it well.”

The eight-way recordings enabled the team to study not only each of the cells’ electrophysiological behaviors, but also whether the cells were electrically communicating with others nearby and, if so, how.

Lastly the team perfected a technique for staining interneurons that revealed the full extent of their branching axon and dendrite morphologies. To document the cells’ morphologies, study coauthor Xiaolong Jiang spent “many hours . . . manually tracing [them] under a microscope,” Tolias explained.

Based on the cells’ individual anatomies and electrophysiologies, the team identified 15 different types of interneuron, many of which had not previously been described.

After studying how these cells connected with one another, however, it was clear that the interneurons fell into three main connectivity subgroups. The first group, which the team called “master regulators,” connected with any other type of interneuron or excitatory neuron (pyramidal cells). The second group, called “pyramidal-neuron-targeting interneurons” (PTIs), connected with pyramidal cells as well as other interneurons of the same family—“their brothers, but not their cousins,” as Ascoli put it. And the third group, “interneuron-selective interneurons” (ISIs), interacted only with other types of interneuron—“their cousins, but not their brothers,” Ascoli said. These three connectivity rules were enough to explain nearly all the team’s data.

For example, it is thought that miswiring of neuronal circuits may be at the root of a number of psychiatric disorders. Therefore, said Zeng, “this [paper] provides a starting point for us to compare disease circuits with normal circuits to see what are the abnormalities.”