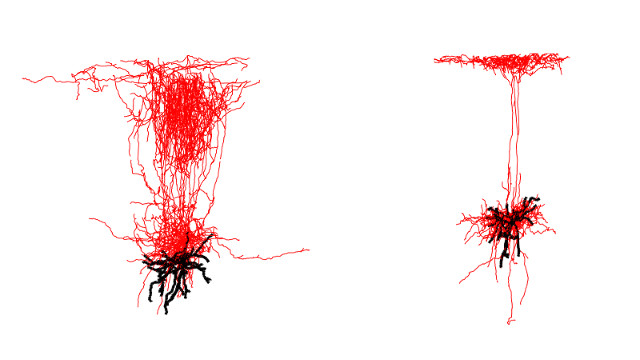 Illustration of interneurons spanning cortical layersNYU LANGONEScientists at New York University’s School of Medicine have probed the deepest layers of the cerebral cortices of mice to record the activities of inhibitory interneurons when the animals are alert and perceptive. The team’s findings reveal that these cells exhibit different activities depending on the cortical layer they occupy, suggesting a level of complexity not previously appreciated. In their paper published in Science today (March 2), the researchers also described the stimulatory and inhibitory inputs that regulate these cells, adding further details to the picture of interneuron operations within the cortical circuitry.

“It is an outstanding example of circuit analysis and a real experimental tour de force,” said neuroscientist Massimo Scanziani of the University of California, San Diego, who was not involved in the work.

Christopher Moore of Brown University in Providence, Rhode Island, who also did not participate in the...

The mammalian cerebral cortex is a melting pot of information, where signals from sensory inputs, emotions, and memories are combined and processed to produce a coherent perception of the world. Excitatory cells are the most abundant type of cortical neurons and are thought to be responsible for the relay and integration of this information, while the rarer interneurons inhibit the excitatory cells to suppress information flow. Interneurons are “a sort of gatekeeper in the cortex,” said Scanziani.

NYU’s Bernardo Rudy and colleagues have a long-standing interest in cortical information processing, but for the present study, they specifically focused on interneurons because “much less is known about them” compared with excitatory cells, he said.

Although interneurons are distributed throughout the six distinct layers of the mammalian cortex, investigations of these cells in living animals’ brains have largely been restricted to the superficial layers—L1, L2, and L3—due to the limitations of the microscopes used to identify cells for electrical recording.

But Rudy’s team has invented a technique, called channelrhodopsin-assisted patching, which allows it to probe deeper than the limits of the microscope. That’s because the pipette they use for recording also identifies the cells. Rudy likens it to a “smart” fishing rod.

“Imagine you are fishing in waters where there are many types of fish, but you just want salmon. If you are fishing blindly, then you will pull out a lot of fish that you have to throw back,” he told The Scientist. “Now imagine that you have a fishing rod that tells you what type of fish has bitten.” One need only pull out the salmon and ignore the rest, he explained.

To find their particular cells of interest—somatostatin(Sst)-expressing interneurons—in live murine cortices, the researchers used mice in which these cells, and only these cells, contained channelrhodopsin—a light-sensitive cell activator. The recording pipette contains a light source, Rudy explained. “So you touch a cell, you shine the light, if that cell has channelrhodopsin, it starts firing action potentials, and you know you’ve got the right cell.” Importantly, the pipette can be plunged beyond the viewing depths of a microscope.

Using this approach, the team identified and recorded from more than 90 Sst interneurons within the cortices of mice that were whisking—moving their whiskers back and forth in an alert and exploratory fashion. That’s “an impressive number of recordings,” neuroscientist Matthew Larkum of Humboldt University in Berlin wrote in an email to The Scientist. (Moore agreed, calling the effort “heroic.”)

“It is important because it is the first work—that I know of—that thoroughly checks the properties of cells through all the cortical layers,” Larkum wrote. “This uncovered properties that were layer-specific.”

The team went on to investigate how the Sst interneurons were being regulated in each layer. Another type of interneuron, called vasoactive intestinal peptide-expressing (Vip) cells, has been shown to suppress Sst cells. Sure enough, synaptic inputs from Vip cells to Sst cells were stronger in L2 and L3 than in L4 and L6, the researchers showed. By contrast, activation of the Sst cells in L4 and L6 was found to depend on signaling through these cells’ acetylcholine receptors.

This result in itself is interesting, said Moore, because “a variety of studies have shown that cholinergic tone can be very closely related to arousal and attentional focus”—like that seen during whisking.

Although the paper does not examine how the activities of these cells impact perception—which is “the big open question,” said Scanziani—the findings “help to constrain your hypotheses,” he said, and thus offer a better shot at the answer.