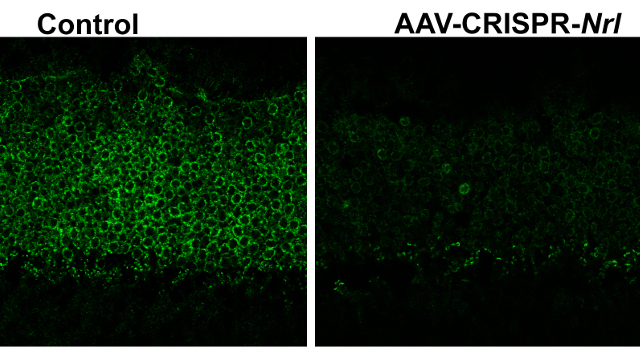 Right: markedly reduced Nrl expression in retinal photoreceptor layer at 2.5 months after administration of AAV-CRISPR/Cas9 against Nrl; left: treatment with AAV-CRISPR/Cas9 against EGFP was used as a control WENHAN YU, NATIONAL EYE INSTITUTE, BETHESDA, MDDelivering a CRISPR/Cas9–based therapy directly to the eye via a viral vector can prevent retinal degeneration in a mouse model of retinitis pigmentosa, a team led by researchers at the National Eye Institute reported in Nature Communications today (March 14). Retinitis pigmentosa, which affects around one in 4,000 people, causes retinal degeneration that eventually leads to blindness. The inherited disorder has been mapped to more than 60 genes (and more than 3,000 mutations), presenting a challenge for researchers working toward a gene therapy. The results of this latest study suggest that a broader, gene-editing–based therapeutic approach could be used to target many of the genetic defects underlying retinitis pigmentosa.

“Given the lack of effective...

This combination of “CRISPR technology with an adeno-associated virus vector, a system tried and true for delivering genetic information to the retina, may represent the first step in a global treatment approach for rod-mediated degenerative disease,” Shannon Boye, whose University of Florida lab develops gene replacement strategies for eye disorders, wrote in an email to The Scientist.

Zhijian Wu, who heads the National Eye Institute’s Ocular Gene Therapy Core, and colleagues designed a CRISPR single guide RNA (sgRNA) to target a retinal transcription factor, Neural retina leucine zipper (Nrl), which specifies rod cell fate during retinal development and maintains rod cells within the mature retina. The team delivered the Nrl-targeted sgRNA and the Cas9 endonuclease directly to the retina of mice on two separate adeno-associated virus (AAV) vectors. According to Wu, the advantage of an AAV vector is the ability to maintain long-term gene expression in non-dividing cells, such as those of the retina.

Corbo’s lab was the first to show that targeting Nrl could preserve the functions of murine cone cells. Using a Cre-based recombination system, the team found that eliminating Nrl could partially convert rod cells into cone-like cells, preventing their deaths as well as the secondary cone cell death seen in retinitis pigmentosa.

“The idea is that we do not turn rods into real cone cells, but for the rod cells to gain some cone feature so that they will resist the mutation effects that cause them to eventually die,” explained Wu.

Because the Cre-recombination approach is not readily translatable into humans, Wu looked to the CRISPR system instead. “This new work represents an advance in two respects,” wrote Corbo. “The authors used an AAV-mediated CRISPR/Cas9 delivery, which can potentially be applied in human patients, and they show that the strategy works in multiple models of retinal degeneration.”

Wu’s team first injected the retinas of 2-week-old wild-type mice with the experimental therapy vectors, then observed the mice for three to four months. The researchers saw reduced Nrl expression in the animals that received the therapy compared to mice injected with control vectors. At six weeks after injection, the treated animals’ rod cells had downregulated rod genes and upregulated cone genes. The treatment did not result in any deleterious effect on cone cells, the researchers reported.

“The completeness of Nrl elimination that they have achieved is impressive and a key feature of this work,” noted Corbo.

The team then tested its vectors on three different mouse models of retinitis pigmentosa—including a model expressing a dominant human mutation in the rhodopsin gene—and followed mice until 3 to 4 months of age. In all three cases, many more rod cells were preserved in the treated animals, preventing apoptosis of the rod cells and the deaths of cone cells.

Stephen Tsang of Columbia University Medical Center, who previously developed a CRISPR-based approach to repair human and mouse retinitis pigmentosa–associated mutations but was not involved in the current work, said this latest study represents a way to target the more-severe forms of the disease. “This type of ‘imprecision medicine approach’ could be the first application in any patients with retinal pigmentosa due one of the 67 genes,” Tsang told The Scientist.

Several questions to be answered remain before this approach can be tested in humans, including whether long-term expression of Cas9 is deleterious to the retina and whether ablation of Nrl will have the same effect in humans as in mice.

“Additional studies are certainly warranted, but these results are encouraging to all investigators exploring the utility of CRISPR/Cas9 in post-mitotic neurons,” wrote Boye.