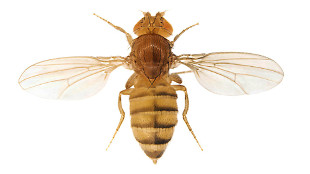 A rare mosaic female fly, with a lighter left half mutated by MCR and a wild-type darker right half.UCSD, VALENTINO GANTZ AND ETHAN BIER

A new genetic-editing technique based on integrating CRISPR/Cas9 technology into a Drosophila melanogaster genome can make homozygous mutants in half the time it would take using traditional crosses, according to a paper published today (March 19) in Science.

“The study is well done and also very elegant,” said Ji-Long Liu of the University of Oxford who was not involved in the research, but helped to develop CRISPR/Cas9 in Drosophila. Liu called the method “a really clever way to . . . make the magic happen.”

The CRISPR/Cas9 system requires two components: a guide RNA that matches the region of the genome to be cleaved, and an enzyme, Cas9, that cuts the DNA. Often, these two elements are transiently expressed in the cells or...

Graduate student Valentino Gantz in Ethan Bier’s laboratory at the University of California, San Diego, needed to develop a method to make homozygous mutants in fly species that lack such genetic tools. Gantz and Bier thus designed the first cassette to integrate both necessary CRISPR elements within the same genome. The “mutagenic chain reaction” (MCR) cassette contains the guide RNA and the Cas9 under the control of a promoter expressed throughout the fly’s body, flanked by regions of homology to the X-chromosome body-color yellow gene the researchers wanted to replace. To test their method, the researchers injected the cassette into embryos of the model organism D. melanogaster, where it integrated into one copy of the chromosome and removed the gene.

When the injected flies were mated with wild-type flies, 95 percent to 100 percent of the progeny that inherited one mutant X chromosome displayed the normally recessive mutant phenotype, indicating that the integrated CRISPR/Cas9 machinery had spread the mutation to the female offspring’s second X chromosome.

Although the scientists tested the system in a model species of fly, it could also be used in other organisms without established genetic tools, said Jeff Sekelsky, a Drosophila geneticist from the University of North Carolina, Chapel Hill, who was not involved in the research. MCR might also be useful for creating a population of mice with multiple knocked-out genes in half the number of generations typically required, and with less intensive screening, Bier said.

The technique could also be applied to pest control. “It’s obvious that this technology could be used to spread gene cassettes in a pest population like mosquitoes that cause malaria,” Bier added. The same concept might even be applied one day as an add-on to gene therapy, spreading mutations to diseased cells throughout the body in a way similar to propagation in an animal population, Bier and Gantz said, although they cautioned that such an application would require extensive tweaking.

However, there are concerns about the technique, such as the possibility that permanently integrated and expressed CRISPR/Cas9 machinery could cut and replace DNA in off-target parts of the genome. “I think having both of the elements continuously expressed at a high level is just asking for a problem to arise,” said Sekelsky. Gantz, who is testing this possibility, said that this might not be a problem in the small Drosophila genome, but could affect mammals. Eventually, the system may incorporate an element that can turn Cas9 off once it is no longer needed, suggested Bier.

The biggest concern—one the authors raised in their paper—is that, if not properly contained, the rapidly propagating mutations created by the powerful MCR technique could affect wild populations. “An absolute caveat that has to be imposed on any experiments that take place strictly in the laboratory is that these animals would have 100 percent containment,” Bier said.

“Certainly, I share the same concerns,” Liu said. Overall, however, he is “quite optimistic about this technology.”