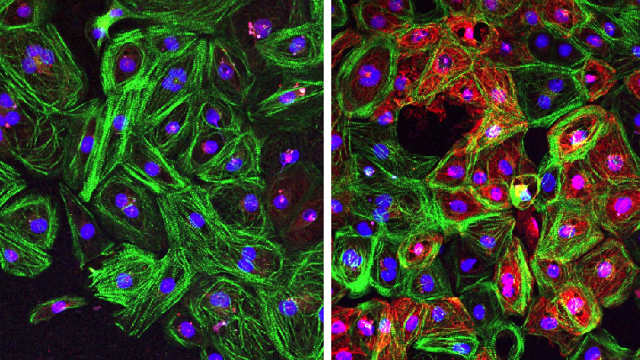 Cardiomyocytes from patients with Duchenne muscular dystrophy (DMD) corrected by CRISPR-Cpf1 reframing during stemness (right) show restored dystrophin expression (red), compared to uncorrected cells (left). SCIENCE ADVANCES, Y. ZHANG ET AL. Researchers have been studying the CRISPR-Cas9 gene-editing system as a potential therapeutic tool to modify or delete pathogenic sequences within the human genome. Now, using a more recently discovered system, CRISPR-Cpf1, researchers have demonstrated its utility in correcting disease-causing mutations within the human and mouse genomes. In a paper published today (April 12) in Science Advances, a team led by researchers at the University of Texas (UT) Southwestern Medical Center described how it corrected Duchenne muscular dystrophy (DMD)–causing mutations in patient-derived stem cells and in a mouse model of the disease. Cpf1-based gene editing was able to at least partially restore function in cultures heart muscle cells derived from a DMD patient. The work is a proof...

“The authors use CRISPR-Cfp1 to correct the Dmd mutation in vitro and ex vivo,” Harvard Stem Cell Institute’s Amy Wagers, who was not involved in the work, wrote in an email to The Scientist. “This study nicely adds to the repertoire of tools available for Dmd editing, showing that Cpf1—like Cas9 nucleases evaluated in prior studies—is also effective for targeting frame-disrupting mutations in Dmd.”

“This exciting work offers another gene-editing reagent that could potentially be used in clinical settings in the future,” said Renzhi Han, who studies the molecular mechanisms of muscular dystrophies at the Ohio State University Medical Center and also was not involved in the study.

DMD, a fatal X-linked disease that results in progressively weakened skeletal and heart muscles, is caused by one of thousands of different mutations, including large deletions that disrupt the open reading of the dystrophin gene, resulting in in nonsense-mediated decay of associated messenger RNAs (mRNAs). In 2014, UT Southwestern’s Eric Olson and colleagues demonstrated the ability of CRISPR-Cas9 to correct a dystrophin gene mutation in the germline of the DMD mouse model. In the present study, Olson and colleagues applied a similar strategy, but used the Cpf1 endonuclease, which differs somewhat from the widely used Streptococcus pyogenes–derived Cas9, including that it requires only a single—and shorter—guide RNA, plus a protospacer adjacent motif (PAM) sequence that is enriched for thymine rather than guanine nucleotides.

“There are many different types of mutations associated with human genetic diseases,” said coauthor Chengzu Long, an assistant professor in the division of cardiology at New York University Langone Medical Center. “It is unlikely that all of these have a SpCas9 PAM sequence in proximity, so other CRISPR systems, like Cpf1, may be able to cover these additional mutations.”

The team coaxed patient-derived fibroblasts into induced pluripotent stem cells (iPSCs) with deletion mutations that result in a premature stop codon within the dystrophin mRNA, then designed guide RNAs that skipped the out-of-frame exon within the gene to restore an almost-full-length protein. When the edited stem cells were differentiated into cardiomyocytes, they both expressed the restored protein and had cellular respiration rates closer to wild-type heart muscle cells, the researchers reported.

“All the published experimental gene repair therapy for DMD relies on making two cuts surrounding the mutated exon to remove the mutation,” Dongsheng Duan, who is working on gene therapy to correct DMD mutations at the University of Missouri, but was not involved in the study, wrote in an email to The Scientist. “The researchers here used a single guide RNA so the genome only needs to be cut once, which increases efficiency.”

To edit the mutated dystrophin gene in vivo, the researchers next injected Cpf1 RNA along with the guide RNA and a 180 base-pair, single-stranded DNA sequence to facilitate homologous recombination, to correct the mutation in mouse zygotes that were then re-implanted into surrogate females. Of the 24 resulting pups, five had a corrected dystrophin gene. All five animals had restored protein within the normally affected tissues (skeletal muscle, heart, and brain) compared that seen in mice with the DMD mutation. These five pups also displayed improved muscle strength, the team noted.

“The dystrophin editing with Cas9 and Cfp1 appears to have similarly high efficiencies without apparent off-target effects,” said Olson.

If the percentage of zygotes with the corrected allele equates to the number of cells within a tissue that is properly corrected, “that 20 percent efficiency is relatively high, and would likely restore function to the tissue,” said Han.

Since germline gene editing cannot be applied to people with DMD, the team is next working on ways to deliver the CRISPR-Cpf1 gene edited cells to the relevant tissues in mice. The researchers are also comparing the efficiency of dystrophin mutation editing with Cpf1 to that of SpCas9. “There is concern about the immune response to these nucleases,” noted Long. “We’re not sure yet whether one of these nucleases is better tolerated or which will work better in patients. That’s why we’re working on both.”