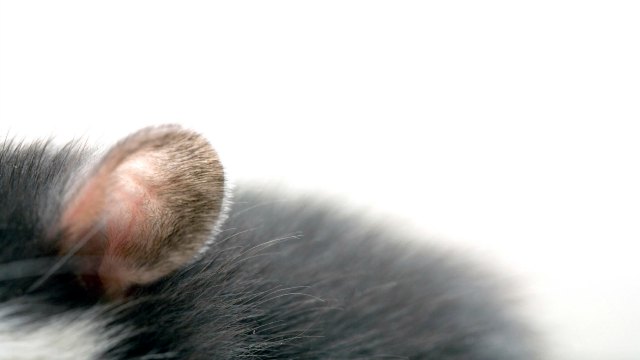 ISTOCK, ALUXUMPeople and mice with a certain dominant mutation in Tmc1—a gene required for normal function of the hair cells that sense sound waves in the inner ear—experience progressive hearing loss. In a study published today (December 20) in Nature, researchers have reduced this hearing loss in mice using a CRISPR-Cas9 genome-editing strategy to inactivate the mutated copy of the gene.

“It’s a pretty significant piece of work,” says Peter Barr-Gillespie, a sensory biologist at Oregon Health and Science University who was not involved in the study. “It shows that CRISPR-mediated gene editing can lead to real amelioration of hearing loss in vivo.”

The so-called Beethoven mouse model has the same point mutation in the mouse version of Tmc1 that in the human gene leads to progressive hearing loss, typically during childhood. Around three weeks, mice begin to lose some of their hearing, and by...

Harvard chemical biologist David Liu and colleagues designed a guide RNA that specifically targets the disease-causing copy of the gene, which is autosomal-dominant, to allow the healthy allele to function. But rather than using a virus-based system to deliver the Cas9 and guide RNA sequences, they encapsulated and delivered Cas9-guide RNA ribonucleotide protein (RNP) complexes within lipids. This strategy improved the editing selectivity for the mutant allele, so that it was targeted 20 times more often than the wild-type allele in cultures of mouse fibroblasts.

Next, the authors injected the lipid RNP complexes into one inner ear of newborn Beethoven mice, which have one Beethoven allele and one wild-type allele, and left one ear uninjected as an internal control. The injected ears had intact, healthy hair cells, but the untreated ears had rapid hair cell death by eight weeks. “That was exciting,” says Liu, “because it suggested that we were preserving hair cell health and abundance compared to the untreated ears.”

Cochlea from a wildtype mouse (right panel), and the untreated ear (left panel) and treated ear (center panel) of a mouse carrying one copy of the autosomal-dominant Beethoven allele. Inner hair cells (IHC) and outer hair cells (OHC) in green are missing in regions of the untreated cochlea. Pink numbers represent the approximate frequencies (in kHz) detected by each segment.X. GAO ET AL., NATURE, 2017

The researchers tested hearing in four-week-old mice by monitoring their auditory brainstem responses (ABRs), a measure of the neuronal reaction to sounds. Untreated ears registered ABRs around 75 to 80 decibels, comparable in volume to a garbage disposal. Treated ears could hear sounds as quiet as about 60 decibels, comparable to a quiet conversation. While this was an improvement, wild-type animals could hear sounds as low as 30 to 40 decibels, suggesting that genome editing resulted in a partial avoidance of hearing loss. At eight weeks, ABR thresholds in the treated ears were still lower than in untreated ears, but higher than at four weeks, suggesting that the rodents’ hearing continued to deteriorate. Behavioral responses to loud sounds followed a similar pattern between treated and wildtype animals.

“It’s nowhere near the threshold of the wild-type mice, [but] the 10-15 decibels could make a huge difference in humans,” says Barr-Gillespie. “That sort of loss of hearing is very noticeable in people and could make for substantial improvements in quality of life.”

“It’s really an impressive and very important result toward treating hereditary deafness,” says Brigitte Malgrange, a neuroscientist at Liège University in Belgium who did not participate in the work. “This is in mice, so the next step will be to try [it] in humans.”

“The question is how widely this technique will be applicable,” cautions Ulrich Müller, a neuroscientist at John Hopkins School of Medicine who was not involved in the study. He explains that many inherited forms of deafness manifest early during human fetal development, which would make this delivery strategy for genome editing much more challenging. But despite open questions about generalizability, the authors’ RNP delivery approach reduces the chance of off-target effects, compared to delivery strategies that rely on persistent viral infection, which is a plus, Müller tells The Scientist.

“Transient delivery of genome editing agents is something that I think is especially promising, when such a delivery strategy is possible,” agrees Liu. “For tissues such as the eye and ear, which are both accessible by local injection, this kind of local RNP delivery offers some real advantages.”