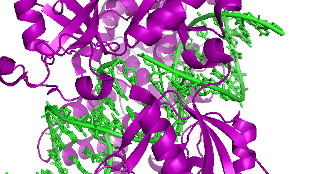 Nicked DNA being repaired by DNA ligaseWIKIMEDIA, MEDCHETaking advantage of a deaminase enzyme that introduces a single nucleotide change to DNA, researchers have created a modified CRISPR/Cas9 tool that avoids the generation of a deleterious double-stranded break, minimizes the potential for the introduction of collateral mutations, and does not require the addition of a DNA template. The new method, described today (August 4) in Science, is the second reporting of such a precise gene-editing tool.

“These deaminases solve the biggest problems with most previous genome-editing methods, including TALENSs, zinc finger nucleases, and Cas9, which is that the desired edits are in competition with random insertions an deletions via non-homologous end-joining (NHEJ),” wrote Harvard University’s George Church whose lab has also developed a deaminase-based base-editing tool. The newly described system “also “reduces the toxicity caused by double stranded breaks,” he added.

“It is always encouraging and helpful...

With the CRISPR/Cas9 system, researchers edit a DNA sequence by introducing Cas9 into a cell, which creates a double-stranded break, and a DNA template that the cell uses to repair that break. This editing process relies on the cell’s homologous recombination machinery but other repair mechanisms, including NHEJ, compete to execute the repair, often resulting in unwanted and imprecise insertions and/or deletions.

“During double-stranded break repair, many things are going on at once and sometimes nucleotides are deleted and inserted or mutated in a way that is out of our control,” study coauthor Akihiko Kondo, of Kobe University in Japan, told The Scientist.

To create a more precise gene-editing tool, Kondo and colleagues fused either a nuclease-dead version of Cas9 that cannot cleave double-stranded DNA or a sea lamprey–derived “nickase” Cas9 that creates a nick (a single-stranded break) with the activation-induced cytidine deaminase (AID). The AID enzyme normally creates mutations in immunoglobulin and antibody genes to generate immune system diversity. AID works on single-stranded DNA, substituting a cytosine (C) to a uracil (U) base, which is then converted into a thymine (T) in the next round of DNA replication.

Testing the ability of the new hybrid complex to modify a selectable marker in budding yeast, which lack an endogenous AID-like system, the team found that when the protein complex was targeted to the CAN1 gene by guide RNA, the frequency of CAN1 mutations increased 1,000-fold compared to a non-targeted selectable marker. Using whole-genome sequencing, the researchers showed few off-target mutations with only a slight increase in the background mutation rate.

“The mutation rate [in the presence of AID] is acceptable, less than 10-fold higher compared to the natural background mutation rate,” said study coauthor Keiji Nishida, a postdoctoral fellow in the Kondo lab.

The researchers also demonstrated the ability to make modifications to two genes simultaneously by expressing two different guide RNAs along with the Cas9-deaminase complex.

Further, the researchers linked an additional enzyme—a uracil-DNA glycosylase inhibitor—to the Cas9-deaminase complex, increasing the efficiency of the complex in creating cytosine-to-thymine substitutions and minimizing the creation of inadvertent deletion mutations in mammalian cell lines.

The modified gene-editing complex also worked well in mammalian cell lines and resulted in relatively few off-target mutations. In yeast, expression of either version of the DNA-editing complex resulted in better growth compared to cells that expressed the standard CRISPR/Cas9 system, suggesting that the new tool is also less toxic.

The so-called Target-AID complex had high specificity, modifying a cytosine within a three to five base pair window within the target gene, the team reported. “We were surprised that the mutation window was so very narrow,” said Nishida.

By comparison, Liu and his colleagues reported variants of their base-editing tool—using a deaminase derived from rats—with windows ranging between three and six nucleotides. “To be maximally useful, the base-editing window needs to be neither too wide nor too narrow so it is helpful that both of these approaches offer researchers more choices, increasing the chance that they can solve their base-editing need,” Liu told The Scientist.

For Church, further developing this tool for clinical applications will require extensive examination of potential off-target effects. Another open question, he noted, is how to target a specific cytosine without hitting adjacent cytosines in the target sequence.

According to Kondo, the team is now working to link Cas9 with other enzymes to create a full range DNA-editing kit capable of creating any of the four nucleotide substitution combinations.