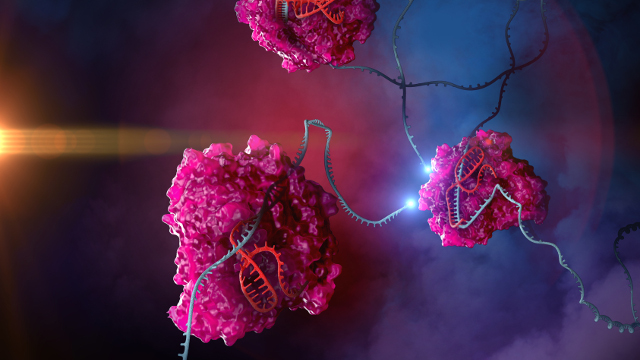 Cas13a bound to and cleaving single-stranded RNA.STEPHEN DIXONBack in 2016, scientists uncovered CRISPR proteins that bind and cleave single-stranded RNA, rather than DNA. Now, the same team from MIT has tweaked the system, called CRISPR-Cas13a, to work in mammalian cells.

“Prior to CRISPR, RNAi was the holy grail with respect to ways to modulate gene expression,” notes Mitchell O’Connell, who works on RNA-targeting CRISPR at the University of Rochester and who was not involved in the work. “But one of the big benefits of Cas13a is that it appears to be more specific and that the system is not native to mammalian cells, so you are less likely to perturb natural post-transcriptional network within the cells, in contrast to RNAi, which coopts endogenous machinery to carry out gene knockdown.”

In a paper published today (October 4) in Nature, MIT’s Feng Zhang and colleagues show the...

The team had gone looking for Cas13a enzymes from various bacterial species that could cleave an Escherichia coli reporter gene. Zhang and his colleagues homed in on the one from Leptotrichia wadei, as it turned out to be most effective at cleaving its RNA target.

They then made a two-plasmid RNA-targeting CRISPR system that expresses the guide RNA and the Cas13a gene on separate plasmids, with the Cas13a gene containing an engineered nuclear localization sequence. The CRISPR-Cas13a construct efficiently cleaved both RNA transcribed from a reporter plasmid as well as from three endogenous genes in a human cell line.

This was the one surprise of the work, that we didn't detect any collateral activity of the modified Cas13a in mammalian or plant cells.—Omar Abudayyeh,
MIT

While the knockdown of each transcript varied—ranging from 40 percent to 83 percent efficiency—the levels were similar to using an RNA interference (RNAi) approach, the team found. They also discovered they could boost efficiency when several guide RNAs were used together.

This RNA-targeting CRISPR system could similarly knock down endogenous genes in cultured protoplasts (cells with the cell wall removed) from the rice plant, Oryza sativa.

“The efficiency between RNAi and Cas13a was similar, and in some cases better, for Cas13a,” notes O’Connell. “This is a good start. Given the authors observed a lot of variability in Cas13a targeting activity depending on the choice of the target site, we still need to more about how to select the best target sites for optimal Cas13a activity.”

“This work is a well-done study that shows the programmable RNA-targeting capabilities of the Cas13a system can be used to knock down cellular RNA targets, bind and enrich RNAs of interest, and to image intracellular RNAs through sequence-specific binding,” writes David Liu, a professor of chemical biology at Harvard University who was not involved in the work, in an email to The Scientist. “It’s a clever and potentially quite useful set of applications of an RNA-targeting CRISPR system.”

Because Zhang and his colleagues had initially showed in bacteria that Cas13a, after cutting its target sequence, acts as a non-specific RNA-cutting enzyme, chopping up RNA in its path, they addressed whether the same property of Cas13a is present in mammalian cells. Using RNA sequencing, they demonstrated that, unlike in bacteria, in their human cell line, Cas13a only targeted the RNA that was specified by the guide RNA, leaving all other RNA sequenced in the cell intact.

“This was a really surprising result—that the non-specific RNA cleaving function of Cas13a doesn’t kick in. It’s a bit baffling and the million dollar question is why?” says O’Connell.

Omar Abudayyeh, a graduate student in Zhang’s lab and study coauthor, agrees. “This was the one surprise of the work, that we didn't detect any collateral activity of the modified Cas13a in mammalian or plant cells.”

The researchers also created a catalytically dead version of the enzyme that binds to sequence-specific single-stranded RNA but does not cleave it. Using this version of the enzyme linked to a fluorescent protein, the team could follow the translocation of Cas13a-bound RNA from the nucleus to the cytoplasm in cells.

Researchers have previously tweaked Cas9, the DNA-binding and -cutting CRISPR protein to target RNA. Whether there are advantages to using Cas9 versus Cas13a to target RNA remains to be seen, according to O’Connell.

“Now that we’ve demonstrated Cas13a can work in mammalian cells for binding and specifically cleaving RNA, there is a whole spectrum of additional applications we can imagine in splicing, measuring how RNA-binding proteins interact with RNA, and much more,” says study author Jonathan Gootenberg, also a graduate student in the Zhang lab.