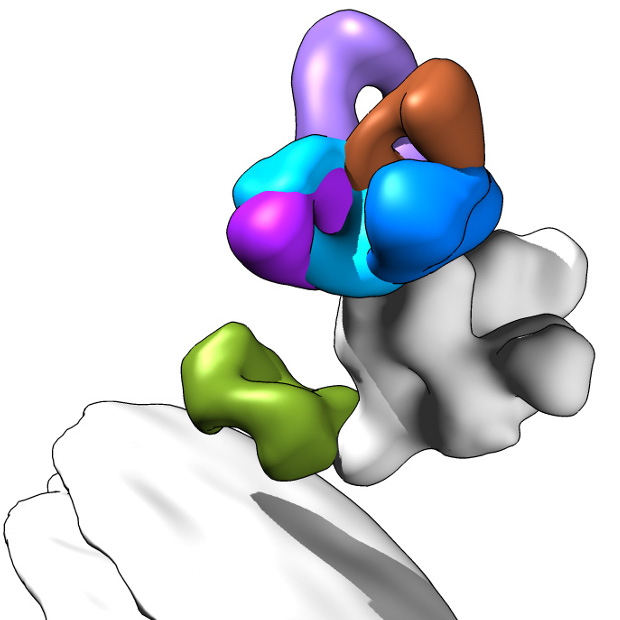 Structure of Bundibugyo survivor antibodies (colors) bound to viral glycoproteinSCRIPPS RESEARCH INSTITUTE; CHARLES MURIN, ANDREW WARDFrom blood samples of survivors of a 2007 Ebola outbreak in Uganda, researchers have isolated antibodies that are protective and can neutralize two other species of Ebolavirus, including ­­Zaire ebolavirus—the one responsible for the massive 2014 outbreak in West Africa. The binding specificities of these human monoclonal antibodies and their activity in animal models of Ebolavirus appeared today (January 21) in Cell.

“What is exciting is that the authors demonstrated that cross-reactive antibodies exist in survivors, and these antibodies are protective in animal models,” Larry Zeitlin, president of Mapp Biopharmaceutical, who was not involved in the current study but is collaborating with its authors as part of a National Institutes of Health (NIH)-funded project to develop and test vaccines and therapeutics against Ebolaviruses, told The Scientist in an email....

“This is a very good paper,” said Lisa Hensley, who has worked on the pathogenesis of viruses including Ebola and is associate director for science at the NIH’s Integrated Research Facility in Maryland. “Looking in people who survived Bundibugyo ebolavirus,” the species behind the 2007 outbreak, “brings our understanding of these viruses a step further. The study moved what we only knew anecdotally into convincing and strong data,” Hensley said.

Within the genus, there are currently three identified viral species that have caused deadly human outbreaks: Z. ebolavirus, B. ebolavirus, and Sudan ebolavirus.

Isolating peripheral blood B cells from seven survivors of B. ebolavirus, James Crowe, Jr., a viral immunologist and director of the Vanderbilt University Vaccine Center in Nashville, Tennessee, and his colleagues identified 90 antibodies that bound to the virus’s outer glycoprotein. Characterizing these human antibodies, the researchers found that 63 percent of them bound the glycoprotein of at least two of the three Ebolavirus species in vitro. Thirty-one (34 percent) of these antibodies were able to neutralize B. ebolavirus in an assay that is commonly used as a surrogate of an in vivo infection, and seven of these neutralized all three viral species, binding to one of three highly conserved regions of the glycoprotein.

The researchers found two different neutralizing antibodies, each used separately to treat Ebola-infected mice, effective. A single treatment with one of these antibodies successfully rescued Ebola-infected guinea pigs, while a combination of two antibodies resulted in complete protection of guinea pigs infected with Z. ebolavirus, the scientists showed.

“Protection against Ebola virus achieved in the guinea pig model is quite predictive of what can happen in humans, and in this model we can achieve protection,” said study coauthor Alexander Bukreyev, a virologist at the University of Texas Medical Branch in Galveston. “The key [result] is that the human immune system does produce protective antibodies. We just need to choose the right ones and give them at a high concentration.”

Crowe agreed. “Some of [the human antibodies] are extremely potent, some of the most potent antivirus antibodies ever isolated. Some of these antibodies possess the two major qualities you want to see in a therapeutic treatment—potent neutralization and breadth of activity against multiple Ebolavirus species.”

A recent study showed that serum isolated from Ebola survivors did not improve patient prognosis. But Mapp Biopharmaceutical’s cocktail of three mouse-derived, humanized monoclonal antibodies against Z. ebolavirus, ZMapp, was last year shown to be an effective treatment in Ebola-infected macaques. “Our goal for the second generation ZMapp product is a pan-Ebola virus antibody cocktail,” Zeitlin told The Scientist. The results of the present study, he added, “provides proof-of-concept for our effort.”

“The previously developed mouse monoclonal antibodies that were part of ZMapp were a solid start,” said Crowe. “But now, this study with antibodies from human survivors shows that we may have been underestimating the ability of antibodies to kill Ebola.”

The Ebola epitopes to which the cross-reactive antibodies bind will not only be helpful to develop new antibody cocktails as treatments but also point to a vaccine that could be used for multiple Ebola species. “This is the deeper implication of this work,” said Crowe.

Crowe, Bukreyev, and their colleagues are now isolating and analyzing antibodies against Z. ebolavirus strains from the most recent outbreak. The researchers are also looking to combine the two types of therapies that have so far been shown to be most potent against Ebola, for a one-two punch: antibodies, which can neutralize already formed viral particles, and small interfering RNAs (siRNAs) that block viral replication.

The ultimate test will be whether the antibodies might be used in a protective vaccine or to treat people infected in the next outbreak. “That is everyone’s goal,” said Hensley. “What we do in animal models is nice, but how does it reflect what will happen in humans?”