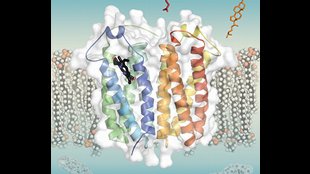 Translocator protein (TSPO) is highly conserved across the kingdoms of life and, in humans, is implicated in a variety of diseases. This integral mitochondrial membrane protein is undoubtedly important, but its exact function is a matter of controversy. Two papers published today (January 29) in Science describing the crystal structure of bacterial TSPO should help resolve the matter, although they contradict a previously proposed structure.

“The structures themselves are really beautiful,” said structural biologist Chris Tate of the Medical Research Council’s Laboratory of Molecular Biology in Cambridge, UK, who was not involved in the studies. “Membrane proteins are very difficult to work on . . . so when you have two independent groups actually coming up with seemingly identical or very similar structures, it’s very gratifying.”

TSPO was first identified as a receptor for benzodiazepine drugs like diazepam, and later found...

Because translocation of cholesterol into the mitochondria is an early step in the production of steroid hormones like testosterone, one long-standing theory is that TSPO is a key player in the process. But “if you make the knockout mice and there’s no apparent phenotype, you do have to question the statement ‘key player,’” said Tate, referring to recent experiments that unexpectedly showed no defects in steroid production in mice whose testosterone-producing cells lacked TSPO.

Resolving the detailed structure of TSPO should provide insight into the putative functions of the protein, thought Wayne Hendrickson of Columbia University Medical Center, a coauthor on one of the new papers. Shelagh Ferguson-Miller and R. Michael Garavito of Michigan State University, coauthors on the second paper, had the same idea. But so, too, did Markus Zweckstetter of the Max Planck Institute for Biophysical Chemistry in Göttingen, Germany—and he got there first.

Ten months ago, Zweckstetter published in Science an atomic structure of the mouse TSPO determined by nuclear magnetic resonance (NMR) spectroscopy. “When we read the paper we had just barely gotten our first structure and we felt completely scooped,” said Hendrickson. “It was a little demoralizing, but we proceeded because we weren’t going to let go of what we had already accomplished.”

But as Hendrickson’s TSPO crystals revealed their structure, it became apparent that something was amiss. Zweckstetter’s structure had determined TSPO to be a monomer, while Hendrickson’s was a dimer—as Tate’s earlier low-resolution electron microscopy studies had predicted. And that was not all: TSPO has five transmembrane helices, explained Hendrickson, “and if you look in detail at where the helices are, we found that three of the five helices are essentially rotated by 180 degrees [relative to Zweckstetter’s structure].” It would be like turning them inside out, he said.

The Michigan State University team found the same crystal structure as Hendrickson by a slightly different method. “You’re always worried about competitors,” Garavito said, but in this instance, “they provided confirmation.”

Both Hendrickson and Garavito’s structures were determined from bacterial TSPO—from Bacillus cereus in Hendrickson’s study, and Rhodobacter sphaeroides in Garavito’s. Zweckstetter’s structure, on the other hand, was that of the murine protein. In an e-mail to The Scientist, Zweckstetter wrote of the new papers: “Although these are clearly interesting studies, we think they have strong limitations due to the studied organisms.” He declined to further comment.

Species differences were unlikely to explain the apparent structural difference, however, said Hendrickson. The sequence identity of bacterial and mouse TSPO is high, he said, “and that alone would lead us to believe that the structures ought to be really very similar.” Furthermore, TSPO from rat can functionally replace that of R. sphaeroides, which would again indicate analogous structures for the bacterial and mammalian forms of the protein.

Garavito is confident that the new crystal structures are correct, he said, because the purified TSPO used for crystallization “has the same high quality, high specificity binding for its ligands as [the native protein].”

His team went on to confirm that TSPO binds both cholesterol and porphyrins, and showed that this binding is disturbed by a mutation equivalent to one found in the human protein that is associated with diminished cholesterol metabolism and increased risk of anxiety-related disorders. Hendrickson’s team confirmed an earlier finding that the protein can enzymatically degrade porphyrins. TSPO’s actual role in cells, however, remains unknown; even Garavito and Hendrickson do not fully agree. Garavito’s team “doesn’t buy into all this enzyme activity,” said Hendrickson. “They’re a little skeptical.”

It’s possible, of course, that TSPO has multiple functions, said Vasillios Papadopoulos, a professor of medicine at McGill University in Montreal who was not involved in the work. “This protein is 5 billion years old,” he said, “so it has been evolving over all that time and has adapted to the various needs of the tissues, cells, and species . . . it’s not surprising that it may really have diverse roles.”