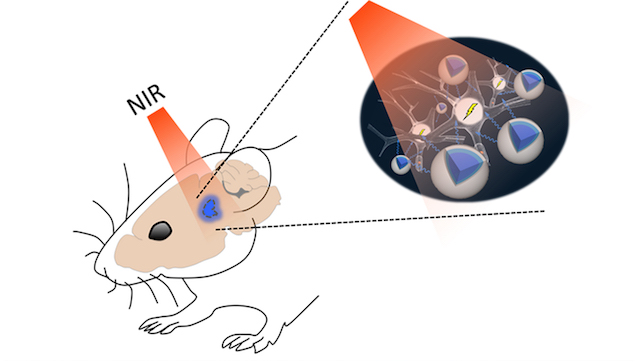 Schematic showing how near-infrared light can pass through brain tissue and activate neurons via nanoparticles.DR SHUO CHEN AND DR THOMAS J. MCHUGHWhen optogenetics debuted over a decade ago, it quickly became the method of choice for many neuroscientists. By using light to selectively control ion channels on neurons in living animal brains, researchers could see how manipulating specific neural circuits altered behavior in real time. Since then, scientists have used the technique to study brain circuity and function across a variety of species, from fruit flies to monkeys—the method is even being tested in a clinical trial to restore vision in patients with a rare genetic disorder. Today (February 8) in Science, researchers report successfully conducting optogenetics experiments using injected nanoparticles in mice, inching the field closer to a noninvasive method of stimulating the brain with light that could one day have therapeutic uses.

See “The Birth of Optogenetics”

McHugh and his colleagues decided to try another approach: They chose near-infrared light, which can more easily penetrate tissue than the blue-green light typically used for optogenetics. “What we saw as an advantage was a kind of chemistry-based approach in which we can harness the power of near-infrared light to penetrate tissue, but still use this existing toolbox that's been developed over the last decade of optogenetic channels that respond to visible light,” McHugh says.

This project was initiated by Shuo Chen, a postdoctoral fellow in McHugh’s lab who had transitioned from chemistry to neuroscience after earning his PhD. “I was using optogenetics to study a projection from the hypothalamic nucleus to the hippocampus,” Chen recalls. “At that time, my question was, can we do this kind of manipulation of the neural circuits that are located deep in the brain in a noninvasive way, instead of implanting optic fibers?”

So Chen, McHugh, and their collaborators devised a method to conduct optogenetic stimulation using nanoparticles that can convert tissue-penetrating near infrared light to blue and green emissions (a process called upconversion). This required two injections directly into the brain areas under investigation—one containing a viral vector loaded with light-gated ion channels, also known as channelrhodopsins, and another carrying the upconverting nanoparticles.

“There's a whole menu, now, of possible interventions that could be used to activate tissues deep in the brain.”

First, the team tested this technique in mice, starting with the ventral tegmental area (VTA), a region deep in the brain with a large population of dopaminergic neurons. After injecting the viral vector and nanoparticles into this spot in anesthetized mice, the researchers shined an infrared light above the animals’ heads—and found that they were able to stimulate dopamine release by activating neurons in the VTA. “The moment we really saw sufficient blue light coming from these nanoparticles at [the] VTA, I knew that this technique should work,” Chen says. “And that was really exciting for me.”

Chen and his colleagues then tested the technique in a series of experiments in the mouse hippocampus. Ultimately, the researchers were able to modify fear-related behaviors by controlling a set of neurons involved in memory formation.

“It's a very nice paper—a significant step in [the] development of possible noninvasive targeted neuromodulation,” optogenetics pioneer Karl Deisseroth writes in an email to The Scientist. Deisseroth, a Stanford University professor who didn’t take part in the new work, first proposed the possibility of using the upconversion of light for noninvasive optogenetics in 2011 with his former student, Polina Anikeeva, who now leads the bioelectronics group at MIT.

Still, the technique, at its current stage, has some limitations. One of the main issues is the efficiency of the upconversion—the nanoparticles can only convert around 2.5 percent of the near-infrared light they receive to blue light. As a result, “the powers that are required to drive those particles would be very difficult to deliver with a miniature, wirelessly powered LED,” Anikeeva, who was not involved in the study, tells The Scientist. (Currently, the light source is not wireless). In addition, “getting the light to the power that is needed to access deep brain structures in larger model organisms will be incredibly challenging without significant [heating],” she says.

Another potential issue, according to Wolfgang Parak of the University of Hamburg who wasn’t involved in the study, is how the nanoparticles will cope with the plasticity of the human brain. “All cells like to incorporate nanoparticles . . . so the positions [of the particles] might change [over time].”

Despite the challenges, nanoparticle-based optogenetics may make it possible to eventually conduct therapeutic deep-brain stimulation (DBS) in a noninvasive way. Currently, DBS uses a pacemaker-like device to stimulate the brain and has been used for decades to treat a handful of neurological disorders, including Parkinson’s and epilepsy. While more than 100,000 patients have been treated with this method, it has a downside—like with traditional optogenetics, the key components (electrodes and a pulse generator) need to be surgically implanted in the brain.

“There's a whole menu, now, of possible interventions that could be used to activate tissues deep in the brain,” says Andres Lozano, a neurosurgeon and professor at the University of Toronto. “There's a number of alternative brain tissue penetrating techniques that could be used to access and manipulate the activity of brain circuits, even without having a permanent implanted hardware in the brain.”

However, Lozano tells The Scientist, many of these newer techniques require transforming the brain in some way, such as with upconversion-based optogenetics, which depends on injecting nanoparticles or viruses carrying genes encoding light-sensitive ion channels into the brain. In addition, the procedures required to make these techniques work are still quite invasive, since they typically require injections directly into the brain. But this hurdle could one day be overcome by delivering these molecules through the bloodstream and using another emerging method, focused ultrasound, to selectively open the blood-brain barrier at the area of interest. In addition, Chen says, “we are trying to develop nanoparticles to allow them to cross the blood-brain barrier.”

All efforts to develop noninvasive DBS for therapeutic purposes have “yet to contend with safety and practicality of surface power requirements given the vastly greater size of the human brain compared with the rodent brain,” Deisseroth writes. “So we will have to wait and see which methods, if any, actually work in the human brain; till then, or even if that never happens, new methods for doing experimental biology are always welcome.”

For now, the team is working to further refine its technique—by increasing the upconversion efficiency of the nanoparticles, for example—and, eventually, scaling up to larger animals, such as rats and non-human primates. This study, McHugh says, is “step one of many, many steps.”