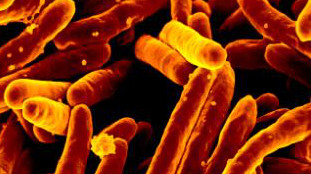 WIKIMEDIA, NIAIDLike most microbes, Mycobacterium tuberculosis is resourceful. The pathogenic bacterium accumulates mutations that help it thrive as it spreads from person to person through the air. Some mutations make the pathogen more virulent; others enhance its transmissibility. But perhaps the most concerning mutations, from a public health perspective, are those that help the infectious agent elude anti-tuberculosis drugs.

A slew of papers appearing online in Nature Genetics today (September 1) aims to enhance scientists’ understanding of drug-resistant tuberculosis (TB), using whole-genome sequencing to analyze more than 500 M. tuberculosis isolates representing genetically diverse strains from around the world. Two separate groups from Boston and Beijing sequenced hundreds of tuberculosis genomes to identify resistance-associated mutations. Meantime, investigators elsewhere in the U.S. used genetic and biochemical manipulations to deconstruct the emergence of resistance to one particular drug and researchers in Spain worked to reconstruct the evolutionary history of TB. Overall,...

These reports “demonstrate there is a lot more involved in drug resistance,” said Tawanda Gumbo, who is the administrative director of research programs in global health at UT Southwestern Medical Center and was not involved in the work. “There is a growing recognition that the targets of drugs are not confined to [what] we thought of in the past,” he added. “Resistance is not confined to one or two genes—[it is] a system-wide response by the pathogen.”

Of the 10,528 TB cases reported to the Centers for Disease Control and Prevention in 2011, 1.3 percent (137) showed primary multidrug resistance—meaning those infected had no previous history with the disease, and their TB was resistant to at least isoniazid and rifampin, the two most powerful anti-TB drugs. Worldwide, there were around 310,000 cases of multidrug resistant TB that same year, according to the World Health Organization. “The thing about tuberculosis is we treat people with multiple drugs, and yet, no matter what we do, drug resistance relentlessly develops—and it develops pretty fast,” said David Alland, a clinician-researcher at Rutgers New Jersey Medical School. “We really need to understand how this is happening so we don’t keep on losing new drugs that we’ve spent decades developing.”

Teams led by Massachusetts General Hospital’s Maha Farhat and the Chinese Academy of Sciences’ Hongtai Zhang have expanded upon an existing repertoire of resistance-related mutations. Beyond confirming known mutations, both groups identified new genome-wide signatures and SNPs that correlated with drug resistance in the bacteria. “Resistance is much more complex than we had envisioned,” Farhat said. “The more you learn, the more you realize you don’t know.”

“Ultimately, this information can be used to create a comprehensive encyclopedia of resistance markers," Sharon Peacock, a clinical microbiologist at the University of Cambridge who was not involved in the work, told The Scientist in an e-mail.

Several of the resistance-associated mutations Farhat’s team identified individually showed only small effects compared with previously identified mutations, she said. “Mutations that have very strong effects—these are mostly already known,” she said. “We need to develop new methods of studying the effects [of these mutations] in groups.”

Alland’s group at Rutgers found similar results as it studied M. tuberculosis strains selected for resistance to ethambutol, a first-line anti-TB drug. The researchers found that ethambutol resistance emerges through the accumulation of multiple mutations.

“One mutation by itself causes very little resistance,” Alland said. “There may be mutations occurring that don’t [on their own] cause resistance, but interact together to produce high-level resistance.”

That M. tuberculosis can acquire multiple mutations of small effect over time could be critical factor in determining the proper course of treatment. “If TB is developing these low-level mutations, it’s probably happening during the treatment cycle where drug levels are low, or in parts of the body where the drugs don’t penetrate well,” Alland said. “We really need to think about how we dose drugs . . . and to understand better where these low-level resistance mutations develop.”

According to the Spanish Centre for Public Health Research’s Iñaki Comas, lead author of a study tracing the coevolutionary histories of humans and TB back 70,000 years, next-generation sequencing (NGS) technologies have fundamentally changed how scientists study pathogens, and how they acquire drug resistance. NGS, he said, enables researchers “to study the bacterial heterogeneity in a single patient, so [it] is increasingly easier to monitor [or even predict] the acquisition of drug-resistant changes.”

The next step, Comas added, is to use sequencing technologies in a prospective manner so as to predict “the capacity of different drug-resistant strains to transmit—[which] will inform us about the course of a drug-resistant epidemic.”