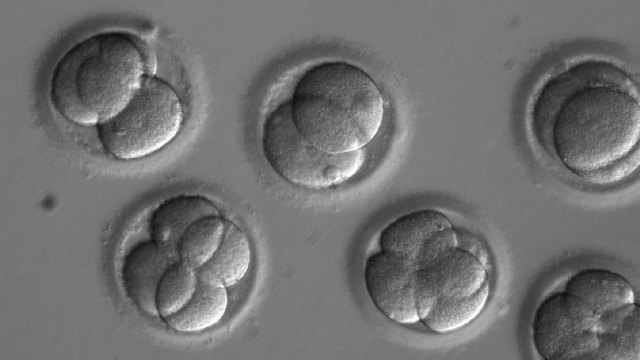 Human embryos two days after co-injection of CRISPR reagents and spermOHSULast week, word got out that a team of scientists had edited viable human embryos for the first time in the United States. Details of the feat were sketchy at the time, but the researchers have published their results in Nature today (August 2), revealing their success in correcting a mutation in the gene MYBPC3 that causes a heart condition.

“It’s a pretty big milestone,” George Church, a geneticist at Harvard University and MIT, tells The Scientist. “People have been wringing their hands about the U.S. losing its edge because it was China making progress. But the careful work just took longer to get to fruition.”

Chinese scientists first reported applying CRISPR to human embryos in 2015. In that case, the embryos had chromosomal abnormalities that would have prevented them from surviving. In the latest...

MYBPC3 has been known as a cause of hypertrophic cardiomyopathy, or muscle thickening in the heart, for decades. Paula Amato and Shoukhrat Mitalipov of Oregon Health & Science University, along with a large team of collaborators, sought to use CRISPR-Cas9 to introduce a break in the DNA at the mutation site, where a proper sequence could then be introduced.

They recruited a dozen healthy egg donors and one sperm donor who carried the MYBPC3 defect. According to the study report, the donor managed his heart condition with an implantable defibrillator and medication. The researchers first tested their technique on induced pluripotent stem cells (iPSCs), finding that about 27 percent of clones were fixed.

They then turned to embryos, none of which were intended for implantation. Dozens were treated with CRISPR, some as already-fertilized zygotes (during S-phase) and others as earlier oocytes (during M phase), into which they simultaneously injected sperm and the CRISPR reagents—Cas9, guide RNAs, and template DNA.

In both setups, the number of normal, homozygous embryos was higher in the treated groups than among controls (around 72 percent versus roughly 50 percent). “If we would progress to clinical-phase applications and trials with this particular mutation I think we would still improve efficacy,” Mitalipov said during a press conference. “Even though the yield of wild type/wild type embryos is still higher, it’s not 100 percent. We have room to improve.”

“We definitely want to replicate this with other mutations and other donors,” Amato says.

The advantage of the M phase injection, the researchers found, was that it eliminated all traces of mosaicism, in which some cells accept the CRISPR treatment properly and others don’t. Additionally, whole-genome sequencing found no off-target effects.

“It makes previous work look pretty amateurish in terms of mosaicism and in terms of off-target effects,” says Church.

Human embryos after co-injection of CRISPR reagents and spermOHSU

Although technologically impressive, the clinical utility of fixing MYBPC3 via CRISPR is quite limited, says Adam Helms, who studies hypertrophic cardiomyopathy at the University of Michigan. For one, the symptoms of the condition vary widely—from severe cases in which children require heart transplants to relatively benign situations—and it’s tough to predict where a patient will end up on that spectrum. Preimplantation gene editing or even gene therapy are “extreme” approaches to apply across the board to such a diverse disease, he says.

Then there’s genetic diversity to consider. Although mutations in MYBPC3 are a common culprit, the one described in Amato’s paper is unusual. Helms checked the Sarcomeric Human Cardiomyopathy Registry (SHaRe), which includes 706 individuals with MYBPC3 mutations. Among them, there were 161 different mutations, and 100 were unique. The four-base deletion of the sperm donor’s was not present.

“The implication here is that creating a method to gene-edit at this one particular mutation would not help others with other mutations,” says Helms. And if gene editing were individualized to each person’s particular mutation, “development and safety testing would need to happen for hundreds of different reagents to prove off-target effects do not occur,” he adds.

It makes previous work look pretty amateurish in terms of mosaicism and in terms of off-target effects.—George Church,
Harvard University

Despite the clinical limitations, the researchers gained biological insights from the experiments. Notably, they were surprised to find that the embryos appeared to correct the mutation using the normal maternal allele as a template (a process called homology directed repair), rather than the introduced DNA sequence. In contrast, the iPSCs preferred the latter repair mechanism.

“I was surprised too in reading that part of the paper,” Paul Knoepfler, a stem cell biologist at the University of California, Davis, writes in an email to The Scientist. “Only this kind of work could have discovered this difference.”

Knoepfler notes that there are still considerable technological kinks that need to be worked out before the method is perfected. For example, although the researchers didn’t observe any off-target effects, they did see indels—small insertions or deletions of base pairs at the target site—around 25 percent of the time. “This is scientifically speaking a low rate and is encouraging, but from a clinical perspective it’s a very high number that must be reduced dramatically to near zero in laboratory research.”

Imperfections in the technique, however, may not be the biggest hurdle to developing germline editing for the clinic. Already, in vitro fertilization clinics have a solid screening method in place to be sure embryos are not implanted with severe genetic defects. Amato says the CRISPR treatment would be used to increase the yield of healthy embryos, but Knoepfler says CRISPR would have to function perfectly to make itself worthwhile.

On top of that, the US Food and Drug Administration will not consider germ-line editing studies for approval, so the researchers will have to look abroad if they aim to develop the technique clinically.