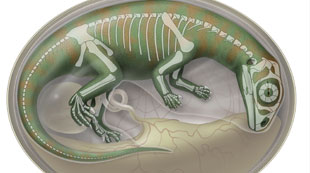 Reconstruction of an embryonic dinosaur inside an egg.D. MAZIERSKISometime in the early Jurassic period, between 190 and 197 million years ago, a flood swept through a dinosaur nesting site in what is now southern China. Dozens of embryos were suffocated in their eggs and their bones were separated from each other, carried away, and buried under sediment.

Today, this site hosts the largest collection of fossilised dinosaur embryos ever discovered. Robert Reisz from the University of Toronto used this treasure trove to reconstruct the growth of dinosaur embryos at unprecedented detail. “We could look at the internal anatomy of the bones to see how fast they grew, which was really quite amazing,” he said. His study is published today (April 10) in Nature.

“It's an excellent study,” said Kevin Padian, a paleontologist from the University of California, Berkeley, who was not involved in the study.  “Embryonic...

Timothy Huang, a Taiwanese chemist and amateur paleontologist, found the embryo bone bed a few years ago. He was walking in the Lower Lufeng Formation, where some of the first Chinese dinosaurs were found, when he noticed tiny bones, no bigger than the lead of a pencil, sticking out from a little hill.

Huang contacted Robert Reisz from the University of Toronto, who had previously found a similar bone bed in South Africa, containing embryos of a dinosaur called Massospondylus. “I said, ‘Don’t touch anything. I’ll come over,’” Reisz recalled.

The new Chinese site was roughly as old as the South African one. “Together, the sites contain by far the oldest dinosaur embryos that have been found,” said Reisz. Many of the fossils contained embryonic teeth that had not yet erupted through the jaw line, and showed the distinctive shape of Lufengosaurus teeth. As an adult, Lufengosaurus grew up to 9 metres in length. Like Massospondylus, this species was a prosauropod—a large predecessor of the even bigger, long-necked sauropods like Diplodocus and Brachiosaurus

Most embryonic skeletons are preserved inside their eggs but the Chinese specimens were scattered and disconnected, making it easier to handle and examine the bones. “We could prepare, clean, and cut a few dozen thigh bones and compare them to one another, which was an unprecedented opportunity,” said Reisz.

The femurs ranged from 12 to 22 millimetres in length. When Reisz cut into them, he found that blood vessels and other soft tissues would have taken up between 60 and 65 percent of their cross-sectional area. By contrast, these tissues only make up 30 to 40 percent of a femur’s cross-section in the adult dinosaurs or modern birds.

This difference suggests that the embryonic prosauropods were growing more quickly than any other dinosaur—or any other boned animal, for that matter. Other specimens suggest that the embryos continued this frantic pace of growth even after they hatched, which may explain how they and their descendants eventually became so gigantic.

The bones did not grow at a constant pace, however. The fourth trochanter—a large knob on the femur that the thigh muscles attach to—became spectacularly bigger in only the oldest embryos. Reisz speculated that this is because the dinosaur’s muscles would have started to flex inside the egg, providing a stimulus that spurs the femur’s development into its mature shape.

Reisz also said that his team has detected traces of organic molecules in the embryonic bones, which he believes to be the degraded remains of proteins like collagen. This echoes the claims of Mary Schweitzer from North Carolina State University, who recently claimed that she recovered collagen and other proteins from the bones of two Cretaceous dinosaurs—Tyrannosaurus and the duck-billed Brachylophosaurus.

Schweitzer’s results have met with considerable skepticism from other paleontologists, but Reisz believes that his evidence is stronger. He analyzed the specimens using infrared spectroscopy and showed that the protein signals are coming from deep inside the bones’ cores, which are too dense for contaminants like bacteria to have penetrated.  “This makes us really confident that the signal is coming from original dinosaurian organic remains,” he said. Reisz has not yet tried to extract the proteins in question, but may try to in the future.