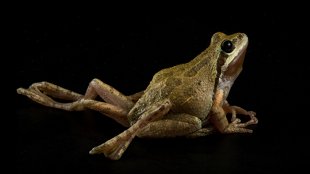 Trematode-infected frog with limb deformitiesD. Herasimtschuk, Freshwaters IllustratedThe chance of a frog getting infected by a parasitic worm that causes limb deformities is less if it lives among a diverse array of pond mates that can also be infected, according to a study published today (February 13) in Nature. The report provides proof for the long-held theory that diversity drives down the spread of pathogens, and has implications beyond the pond, in human health and disease.

“This is the most complete study I’ve seen on biodiversity decreasing disease,” said Andrew Blaustein, a professor of zoology at Oregon State University, who was not involved in the study.

“The study is unusually comprehensive in combining field and lab and mesocosm—[controlled ecosystem]—studies,” agreed Rick Ostfeld, a disease ecologist at the Cary Institute of Ecosystem Studies, in Millbrook, New York, who also did not participate in the work. “It’s...

According to a theory, known as the dilution effect, having a variety of host species to infect will actually reduce the chances that a parasite will spread. The idea is, hosts that are readily susceptible to infection will become diluted in the population by more resistant hosts as diversity increases. Indeed, recent studies of West Nile virus and Lyme disease-causing bacteria indicated that high host biodiversity limits the prevalence of infections.

Despite these observations, the underlying mechanisms were unclear, said Pieter Johnson, a professor of ecology and evolutionary biology at the University of Colorado in Boulder, who led the study. “Is it a true cause-and-effect relationship?” he asked. “Or is it just some kind of spurious correlation?”

When working with a disease like West Nile virus, answering those questions is practically impossible, Johnson added. “[The virus] is operating on such large spatial scales, in lots of different bird species, some reptiles, mosquitos . . . it is almost intractable.”

Johnson thus chose to focus on a smaller, well-defined ecosystem. He donned wading gear, grabbed a bucket, and headed to some nearby ponds to study the spread of Ribeiroia ondatrae, a trematode worm that infects the tadpoles of various frog, newt, and salamander species.

Laboratory tests on the six species of amphibian that are native to ponds in the Bay Area of California revealed that they varied in their susceptibility to R. ondatrae infection. So in theory, a dilution effect of host diversity was possible.

Johnson began an extensive 3-year long period of pond-sampling. He visited 345 different Californian ponds and, for each, documented the presence or absence of the six species—giving the ponds a biodiversity rank from 1 to 6—as well as the number and proportion of infected individuals.

He also documented the abundance and proportion of infected snails, which serve as R. ondatrae hosts at an earlier stage in the pathogen’s lifecycle. Controlling for the possibility that an unusually high or low number of infected snails might skew the amphibian data, Johnson found that higher biodiversity was indeed negatively correlated with the spread of disease. Furthermore, lab and mesocosm experiments, in which both the amphibian species and numbers of worm larvae were controlled, confirmed that decreasing diversity actually caused an increase in infected individuals.

These lab and mesocosm experiments also controlled for the possibility that increasing species density, rather than diversity, might explain the decreased proportion of infected individuals. “We built systems where the total number of hosts goes up with diversity, and also where we changed the [species present], but maintained the total number,” he explained. The negative correlation between disease and diversity remained in both instances.

Johnson’s pond study is “a good model for other disease systems” said Blaustein, as well as being a good argument for the need to preserve biodiversity wherever possible. “I could give you a whole list of reasons to protect biodiversity,” he said, “but one of the main reasons is that it may actually help [reduce] disease.”

Johnson agreed. “We could potentially use the protection of biodiversity as one way to control against certain kinds of infection,” including those that threaten human health.