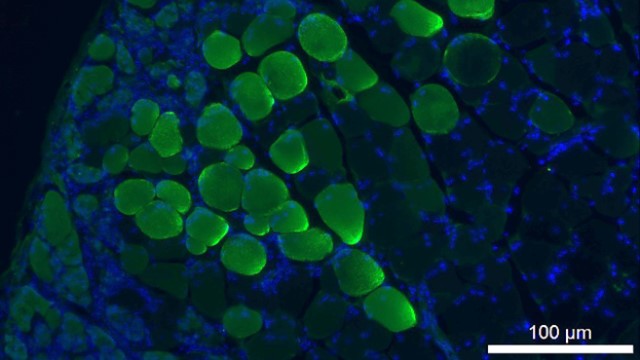 US researchers have successfully delivered a monoclonal antibody against a severe bacterial infection using DNA—the first time such a platform has been used for a bacterial target. Mice injected with the genetic sequence for a monoclonal antibody survived inoculation with the life-threating, multidrug-resistant pathogen Pseudomonas aeruginosa, providing a proof-of-concept for a potentially cheaper and faster alternative to current monoclonal antibody treatments. The findings were published last month (September 21) in Nature Communications.

“It’s great to see that this kind of in vivo delivery can have a protective effect, in this case in the context of a bacterial infection,” says Mireia Pelegrin, an immunologist at the Institute of Molecular Genetics of Montpellier, France, who was not involved in the current research. Compared to previous attempts with the...

Monoclonal antibodies target specific antigens on foreign cells in the body. As technologies to isolate or generate these antibodies have advanced, scientists have developed the proteins into highly specific, well-tolerated treatments against several types of disease, from cancer to autoimmune conditions. But their application is not without obstacles.

Usually administered in large quantities through an intravenous drip, “they require repeat administration, their delivery is difficult, and their production is slow,” says study coauthor David Weiner, director of the Vaccine and Immunotherapy Center at the Wistar Institute in Philadelphia. Consequently, “monoclonal antibodies are quite expensive. . . . If you look a map of who gets monoclonal antibodies and who’s treated with them, it’s only really the richest people in the richest countries in the world.”

To circumvent these obstacles, several research teams in academia and industry are working on alternative modes of delivery. One potential platform uses DNA-delivered monoclonal antibodies, or DMAbs, which introduce genes coding for the antibodies into cells via a vector such as a plasmid, allowing the proteins to be produced by a prospective patient in vivo.

The approach has several advantages, explains study coauthor Ken Stover, a microbiologist at AstraZeneca subsidiary MedImmune. “DNA is more readily manufacturable” than protein antibodies, he says, and so “the time to produce [a] drug may be quicker.” What’s more, rather than requiring a continuous infusion, or series of infusions, “DNA can hang around a while and continue to express the monoclonal antibody, hopefully at levels that are more sustainable.”

Weiner and collaborators previously demonstrated the capacity of DMAbs to provide protection against dengue, chikungunya, and influenza viruses in mice. For the current study, they focused their aim at P. aeruginosa, a multidrug-resistant bacterium associated with severe hospital-acquired infections.

First, the researchers encoded two monoclonal antibodies shown to be effective against P. aeruginosa into DNA. One antibody targets Psl, a Pseudomonas antigen involved in biofilm formation and evasion of the host immune system; the other is a bispecific antibody targeting Psl plus PcrV, a protein thought to be important for host cell infection.

“They show that [the DMAb] actually has efficiency in protection against Pseudomonas.”—Bjarne Bogen,
University of Oslo

Control mice that had received an irrelevant DMAb—one shown to be protective against dengue virus—stood no chance: all succumbed to the infection within a few days. But the 16 mice given either of the Pseudomonas­-specific DMAbs had a six-day survival rate of 94 percent—not far off the 100 percent survival of a second control group of mice receiving the bispecific monoclonal antibody through an injection of protein into the abdomen.

The DMAb-receiving animals also maintained low quantities of the bacterium in the lungs, spleen, and kidney, along with reduced inflammation and protection against pulmonary edema—just like mice that had received the bispecific antibody as a protein.

“I’m very impressed,” says Bjarne Bogen, an immunologist at the University of Oslo. “They show that [the DMAb] actually has efficiency in protection against Pseudomonas.” Although the findings could have medical importance, Bogen notes, his own team’s research on DMAbs in the 2000s revealed that compared to mice, larger animals such as rabbits or sheep had substantially lower antibody levels after treatment.

The Wistar researchers “show they can get fairly high levels of antibodies in serum when they deliver the DNA” in mice, he says. “I think it will be perhaps more difficult to obtain similarly high concentrations [in humans]. That will be for the future to determine.”

Weiner agrees that the team has substantial work ahead to explore whether the current platform can be translated into a therapeutic setting. “People are not small animals,” he says. “We’re very excited about where we are, but we have a ways to go. . . . Advancing it eventually into clinical study is going to be important.”