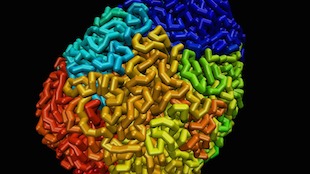 Physics simulation of 5 megabases of DNA forming loops and domainsADRIAN SANBORN, EREZ LIEBERMAN AIDEN Researchers have created the highest-resolution map to date of how the human genome folds within the nucleus, according to a study published today (December 11) in Cell. The work illuminates basic facts about the genome’s 3-D structure, including that it forms around 10,000 loops. It also sheds light on how genome structure influences gene expression, as looping DNA brings promoters and enhancers into close proximity. The work covers one mouse and eight human cell types.

“This is indeed a standard-setting paper,” said Bing Ren, a professor of cellular and molecular medicine at the University of California, San Diego, who was not involved in the study. “It's a landmark in the field of genome architecture.” Ren’s lab published its own 3-D map of genome structure last year, but according to Ren, this latest...

“This huge dataset will be used as a highly valuable resource for many researchers to mine and address all sorts of questions related to the functioning of our genome,” Wouter de Laat, who studies DNA architecture at the Hubrecht Institute in the Netherlands, wrote in an e-mail to The Scientist.

The work was led by Erez Lieberman Aiden, director of the Center for Genome Architecture at Baylor College of Medicine and Rice University in Houston, Texas, and Eric Lander of the Broad Institute in Cambridge, Massachusetts.

The researchers created their map using an updated version of a previously published method called Hi-C. (See “Nuclear Cartography,” The Scientist, October 2014.) First, they crosslinked the DNA in cells with formaldehyde to preserve its 3-D structure. Next, they treated the DNA with restriction enzymes, cutting it into tiny pieces. They then added biotin markers to the ends of the cut DNA, followed by ligase, which binds together any free DNA ends that are in close proximity. The idea is that DNA will form small circles near where strands were bound together. Finally, the researchers sheared the DNA and pulled down biotin-marked fragments, which they sequenced.

The slight difference between the new “in situ” Hi-C and the original Hi-C is that, through the new approach, the DNA remains in the nucleus during ligation, rather than being released into a solution. This reduces the potential for accidental binding of DNA fragments to other fragments that were not actually their neighbors in the nucleus.

Hi-C yielded a dizzying array of contacts between different regions of the genome. The researchers used algorithms to determine the genome’s structure. Defining loops as regions of DNA demarcated by two loci that were more frequently in contact with one another than with other loci in between them, the researchers broke the genome down the into contact domains—regions of the genome in which loci tend to interact with each more than with other genomic regions. In many cases, contact domains are contained within loops.

“The contents of the loop tends to interact with itself,” explained study coauthor Suhas Rao, a researcher at the Center for Genome Architecture. Loci within contact domains also tend to have relatively uniform histone modifications. Finally, the researchers found that the genome can be divided into at least six subcompartments, or regions that segregate into similar sectors of the nucleus.

Altogether, the team identified around 10,000 loops—far fewer than previously estimated. “I was shocked, frankly speaking, when I saw that number,” said Ren, who himself once estimated that there were more than 1 million loops in the human genome.

“I think much depends on how you define a loop,” said Giacomo Cavalli, who studies chromatin and cell biology at the Institute of Human Genetics in Montpellier, France, and was not involved in the study.

The researchers also found that the protein CTCF often binds to DNA at the point where it forms a loop. Moreover, they found that the two CTCFs, each binding one piece of DNA, usually face each other.

The researchers further attempted to understand the function of the loops. They confirmed that loops often bring together distant enhancers and promoters and that these pairings often lead to changes in gene expression. Thirty percent of the loops found in a lymphoblastoid cell line (GM12878) were formed by promoters and enhancers coming together, the researchers found.

And many loops were conserved among cell types, and even between mice and humans. But others seemed to drive cell type-specific gene expression patterns. The researchers said that their map will help scientists to understand the functional effects of mutations to non-coding DNA regions.

“Detailed 3-D genome maps are crucial for the interpretation of disease-associated variants in the genome,” said de Laat. Genome-wide association studies “often identify risk variants located in non-coding intergenic sequences, making it difficult to understand how they drive disease,” he noted, adding that 3-D genome maps could help researchers to find the targets of regulatory elements.

“We’ve associated the genes with the distal regions that control them,” said Rao. “[Now] we can actually start to make sense of all the mutations that we weren’t able to before.”

Finally, the researchers compared looping in diploid chromosome pairs. They found that homologous chromosomes do show slightly different looping patterns, possibly reflecting imprinting that only turns one copy of a gene at a time. Predictably, they found more pronounced differences in looping between active and inactive X chromosomes in female cells. The inactive X chromosomes had superdomains and superloops much larger than those found in other chromosomes.

The researchers said they hope other scientists will explore their data using their downloadable tool, Juicebox. “It allows anybody, us and other users, to look at any regions that we’re interested in,” said study coauthor Miriam Huntley, a PhD student at Harvard University. “Any user who [is] interested in a particular gene or  . . . a particular enhancer or a particular mutation. They can . . . zoom into a particular region, and they can try to see what’s happening there. How is the genome folding in this area that I care about?”

“There’s a lot we can learn not just by reading the paper, but by going through the data and comparing them to other works,” said Cavalli.