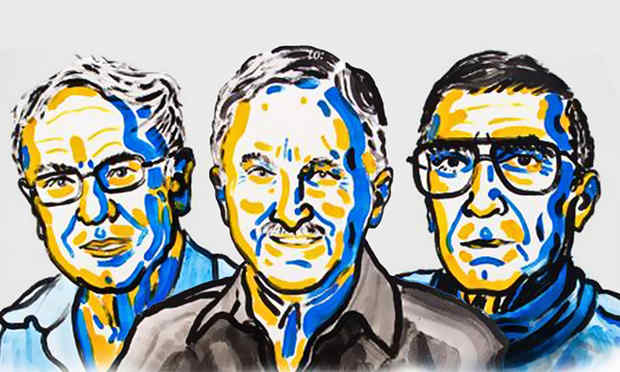 Tomas Lindahl, Paul Modrich, and Aziz Sancar today (October 7) took the 2015 Nobel Prize in Chemistry for their seminal research on DNA repair. The three scientists share equally in the prize “for having mapped, at a molecular level, how cells repair damaged DNA and safeguard the genetic information,” according to a Nobel Foundation statement.

“All living cells have repair mechanisms . . . to counter DNA damage,” Lindahl said during a Nobel Foundation press conference following the prize announcement. “[DNA damage] can result in a number of diseases, including cancer.” Asked about sharing in a Nobel Prize, he told reporters: “I feel very lucky and proud to be selected.”

Lindahl is a member of the Nobel Prize...

“Tomas was a kind of giant in the field and he has made really, really profound contributions to all aspects of DNA repair and DNA decay,” said Lindahl’s colleague Peter Karran of the Francis Crick Institute.

Later, Modrich, a professor of biochemistry and genomics at the Duke University Medical Center in Durham, North Carolina, described mismatch repair, which reduces the frequency of DNA replication-related errors. Sancar, a professor of biochemistry and biophysics at the University of North Carolina School of Medicine in Chapel Hill, described nucleotide excision repair, which cells use to counteract the effects of mutagens.

Update (7:06 a.m.): Sancar “spent his entire career working in DNA repair,” Christopher Selby,  a research assistant professor at the University of North Carolina who has worked in Sancar’s lab since 1987, told The Scientist. “It’s exciting and interesting to see what it takes to get an award like that. . . . I’ve been fairly close with him throughout his career and I [have now] seen firsthand what goes into generating a body of work that goes into that sort of thing.”

Update (7:26 a.m.): “These guys have [made] tremendous, longstanding contributions to DNA repair, which is what keeps us all alive,” David Lilley, a professor of molecular biology at the University of Dundee, U.K., told The Scientist. “DNA is your library in the cell—you’ve gotta repair it, and it’s under massive onslaught. These [DNA repair] mechanisms are tremendously important.”

Update (7:34 a.m.): “I am absolutely thrilled. Paul was really there at the ground level. He really discovered these proteins in the DNA mismatch repair pathway,” said Lorena Beese, a professor of biochemistry at Duke University who has collaborated with Modrich since the mid-1990s. DNA repair “is such an essential area [of research],” Beese told The Scientist. “Mismatch repair, in particular—there are so many questions left on how this essential process works.”