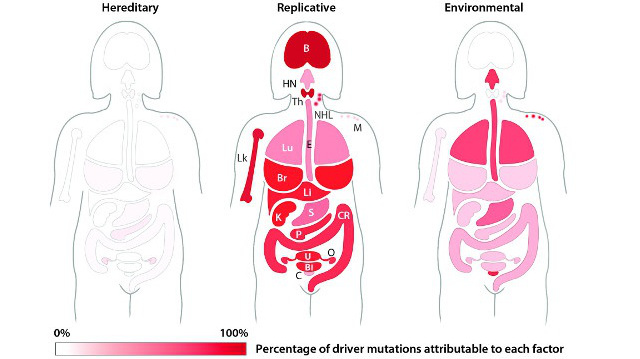 Illustration depicting mutations attributable to environmental factors (right), DNA replication (center), and heredity (left)SCIENCE, C. TOMASETTI ET AL.Two years ago, researchers at Johns Hopkins University School of Medicine analyzed data on 31 cancer types, finding that the number of stem cell divisions within a tissue—over a lifetime—could partly explain the variation in cancer risk across different tissue types. In other words, the higher incidence of colon cancer versus brain cancer could be due to the relatively higher number of stem cell divisions in the colon compared to the relative infrequency of these divisions in the brain.

That study, by mathematician Cristian Tomasetti and cancer geneticist Bert Vogelstein of Johns Hopkins, sparked controversy in part because the results of the team’s analysis were misrepresented in some media reports, which declared that the study had indicated the proportion of cancers that arise from random DNA replication errors.

The Hopkins team originally used U.S.-based Surveillance, Epidemiology, and End Results (SEER) data on lifetime cancer risk, finding a strong positive, linear correlation between number of stem cell divisions and cancer incidence. “This observation provided a hint that these random mutations play a large role in cancer, but didn’t provide information on how many of the mutations in colon cancer, for example, were due to environmental or hereditary factors rather than random errors made during DNA replication,” Vogelstein told The Scientist.

For the present study, the researchers performed their same correlation analysis, this time including 17 different cancer types and cancer incidence data collected from 69 countries around the world (representing approximately two-thirds of the globe). The team assumed the existing, largely agreed-upon idea that around three mutations are introduced into the genome every time a noncancerous, normal human stem cell divides.

The researchers’ analysis confirmed the reported correlation, indicating that cumulative lifetime stem cell divisions could predict the relative risk of these 17 cancer types. “The fact that we see a similar correlation in all the world’s countries we analyzed, to us says that this result is largely independent of the variations in environments and lifestyle factors observed across the world,” Tomasetti told The Scientist.

Still, the statistical correlation between these two variables does not differentiate among the contributions of DNA replication errors, environmental, and hereditary risk factors to all mutations observed in a given cancer. “Even if there is a strong correlation between cancer risk and stem cell divisions, the observed correlation tells us nothing about the possible biological mechanism behind it,” explained Bartlomiej Waclaw, a research fellow in biological physics at the University of Edinburgh, U.K., who penned an accompanying editorial but was not involved in the work.

To address the relative proportion of mutations that result from these three factors, the authors built a model that incorporated the mutation burden of 32 tumor types using whole-exome sequencing tumor data from The Cancer Genome Atlas and U.K.-based epidemiology data on environmental factors, such as UV light exposure and tobacco smoke. For this modeling experiment, the researchers assumed the DNA replication error rate to be greater than zero.

“This is the first estimate of the fraction of mutation types that are responsible for cancers overall, or for individual cancer types,” said Vogelstein.

The estimates of DNA replication error mutation proportions varied from around 10 percent to more than 95 percent, depending on the impact of environmental factor–associated and heritable mutations for a certain cancer type.

In a theoretical example, in which the environment greatly increased the incidence of cancer, the team showed that around 40 percent of cancer-associated mutations would still be due to DNA replication errors.

“The analysis is really novel and very interesting,” said Waclaw. “It remains to be seen how robust the model is as our knowledge and assumptions of how cancer initiates and progresses evolves.”

Aaron Meyer of the Koch Institute for Integrative Cancer Research at MIT, who was not involved in the study, said that future work will require non-epidemiological data “to fill in the mechanistic details.”

How to fully tease apart the contributions of DNA replication errors from environmental and hereditary risk factors remains an open question. “I think most of us would want to know what fraction of cancer incidents are purely unpreventable,” said Meyer. “Then, building on that, the next question is figuring out—on the molecular scale, within a single tumor—which mutations are due to which component. One day, being able to say ‘these mutations probably came from DNA replication, and these from an environmental factor’ will help us to reconstitute the history of cancer.”

Vogelstein and Tomasetti said that their team’s analyses call attention to a critical part of cancer etiology—presumably non-preventable random DNA copying errors, which are not often discussed.

“Basically, this shows that cancer, to a certain extent, can be thought of as a side effect of evolution,” said Vogelstein.