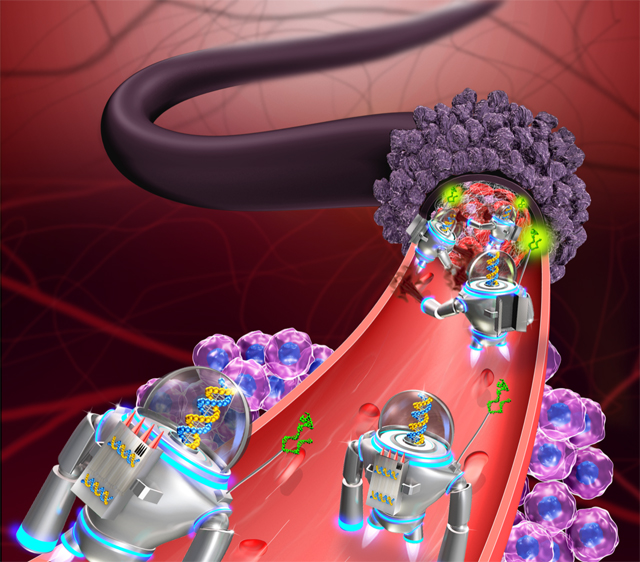 BAOQUAN DING AND HAO YANDNA nanorobots that travel the bloodstream, find tumors, and dispense a protein that causes blood clotting trigger the death of cancer cells in mice, according to a study published today (February 12) in Nature Biotechnology.

The authors have “demonstrated that it’s indeed possible to do site-specific drug delivery using biocompatible, biodegradable, DNA-based bionanorobots for cancer therapeutics,” says Suresh Neethirajan, a bioengineer at the University of Guelph in Ontario, Canada, who did not participate in the study. “It’s a combination of diagnosing the biomarkers on the surface of the cancer itself and also, upon recognizing that, delivering the specific drug to be able to treat it.”

The international team of researchers started with the goal of “finding a path to design nanorobots that can be applied to treatment of cancer in human[s],” writes coauthor Hao Yan of Arizona State University in an email...

Yan and colleagues first generated a self-assembling, rectangular, DNA-origami sheet to which they linked thrombin, an enzyme responsible for blood clotting. Then, they used DNA fasteners to join the long edges of the rectangle, resulting in a tubular nanorobot with thrombin on the inside. The authors designed the fasteners to dissociate when they bind nucleolin—a protein specific to the surface of tumor blood-vessel cells—at which point, the tube opens and exposes its cargo. 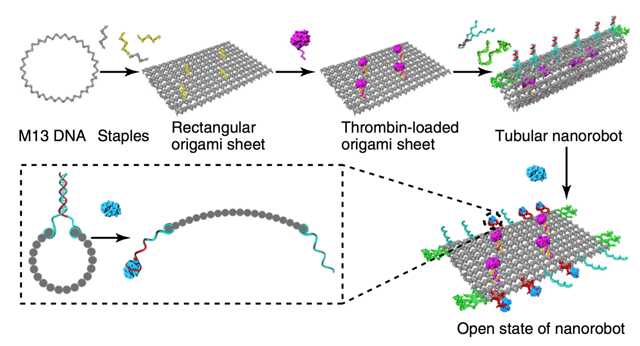 The scientists next injected the nanorobots intravenously into nude mice with human breast cancer tumors. The robots grabbed onto vascular cells at tumor sites and caused extensive blood clots in the tumors’ vessels within 48 hours, but did not cause clotting elsewhere in the animals’ bodies. These blood clots led to tumor-cell necrosis, resulting in smaller tumors and a better chance for survival compared to control mice. Yan’s team also found that nanorobot treatment increased survival and led to smaller tumors in a mouse model of melanoma, and in mice with xenografts of human ovarian cancer cells.

The authors are “looking at specific binding to tumor cells, which is basically the holy grail for . . . cancer therapy,” says the University of Tennessee’s Scott Lenaghan, who was not involved in the work. The next step is to investigate any damage—such as undetected clots or immune-system responses—in the host organism, he says, as well as to determine how much thrombin is actually delivered at the tumor sites.

The authors showed in the study that the nanorobots didn’t cause clotting in major tissues in miniature pigs, which satisfies some safety concerns, but Yan agrees that more work is needed. “We are interested in looking further into the practicalities of this work in mouse models,” he writes.

Going from “a mouse model to humans is a huge step,” says Mauro Ferrari, a biomedical engineer at Houston Methodist Hospital and Weill Cornell Medical College who did not participate in the study. It’s not yet clear whether targeting nucleolin and delivering thrombin will be clinically relevant, he says, “but the breakthrough aspect is [that] this is a platform. They can use a similar approach for other things, which is really exciting. It’s got big implications.”