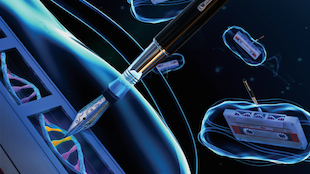 MOJTABA AMINA new DNA editing system can target specific DNA throughout the bacterial genome in response to chemicals or other stimuli, according to a paper published today (November 13) in Science. The new system, called SCRIBE, for Synthetic Cellular Recorders Integrating Biological Events, could allow researchers to record events happening within or around cells.

The method requires expressing single-stranded DNA and DNA-editing phage beta recombinases in response to signals. “The single-stranded DNA tells the recombinase where to go in the genome, and where to write that information,” explained coauthor Timothy Lu, a synthetic biologist at MIT whose team tested the new system in E. coli. “Essentially you get targeted mutations at a specific locus in the genome.” It is then possible to read the DNA’s experience by sequencing, or by editing the nucleic acid to confer telltale characteristics, such as antibiotic resistance, to the bacteria. Those...

“I think it’s pretty complicated, to some extent,” said Sri Kosuri, a synthetic biologist at the University of California, Los Angeles. “Not everyone is going to use this as their reporter right away, but I thought it was a pretty impressive piece of work.”

Previously, researchers have been able to record more than a byte of data using other recombinases that flip large sections of DNA. However, these recombinases only edit where they recognize specific flanking sequences, so they can only make changes where these sequences have been added. Generating mutations at different loci under different conditions requires multiple recombinases.

Lu and his colleagues decided to harness a recombinase that works slightly differently. Called beta recombinase, the enzyme has been shown to incorporate single-stranded DNA into genomic locations that complement its sequence. Using bacterial reverse transcriptases called retrons, the researchers engineered E. coli to express single-stranded DNA in response to various signals.

The team incorporated instructions for making specific single-stranded DNAs into RNA templates associated with retrons. They put both the retrons and the beta recombinase genes under the control of chemical-activated promoters and inserted these environmentally controlled genes into E. coli on plasmids. Upon exposure to the activating chemicals, the single-stranded DNAs directed the recombinases to add specific DNA sequences to the E. coli genome.

“There’s been a number of efforts to make single-stranded DNA in vivo with not a ton of success, so this is pretty cool that it works,” said Kosuri.

The researchers demonstrated that they could use the cells to measure quantity of chemical exposure, not just presence or absence of a chemical. Since SCRIBE is not 100 percent efficient at making edits to DNA, they were able to calculate extent of chemical exposure by assessing what percentage of a population of cells had been edited. The researchers also showed that they could induce editing using light exposure.

SCRIBE has many possible applications, according to Lu. It could be used to create natural sensors for use in humans. For instance, it could be possible to give people probiotics that would record events in their guts, such as inflammation, he said.

Further down the road, if SCRIBE could be adapted for use in mammalian cells, it could be used to record the inner workings of a diverse set of cellular types, Lu added. For instance, one might be able to noninvasively record neuronal firing.

Danwei Huangfu, a stem cell biologist at Memorial Sloan Kettering Cancer Center, even suggested that, in mammals, SCRIBE might be useful for targeted genetic engineering of specific cell types at specific times, as changes could be induced only in tissues that expressed certain signals.

A limiting factor is the availability of promoters that are responsive to the full range of signals that people might want to record, but Lu optimistically said that other groups “are hunting for new sensors to couple information into systems like ours.”

On a more fundamental level, researchers are simply excited that Lu’s team has made cells a little more computer-like. “They are building a device out of a cell, which to me is quite amazing just to think about,” said Huangfu.