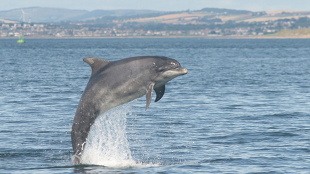 Bottlenose dolphin.VINCENT M. JANIK, UNIVERSITY OF ST ANDREWSOne of the most fascinating aspects of language is the ability to name individuals, objects, and places with a signature sound. While human language skills may be unique, African Grey parrots and captive bottlenose dolphins have been taught to link specific sets of sounds with objects—a rare ability in the animal kingdom. But whether, and in what contexts, these animals apply the same principles in the wild has been hotly debated. Now, research published yesterday (July 22) in The Proceedings of the National Academy of Sciences suggests that dolphins do use and respond to individual names.

In the first few months of life, each bottlenose dolphin develops what’s known as a “signature whistle”—a collection of notes unique to each dolphin. Though dolphins mostly stick to their own whistle, anecdotal evidence suggested that dolphins sometimes copy each others signature whistles. “But it...

In order to get a clearer sense of who calls whose whistle and under what circumstances, King and her collaborators first recorded calls of dolphins off the coast of Florida and a few dolphins in captivity. The researchers found that copying only occurred between animals with close social bonds, such as mothers and calves or pairs of captive male dolphins. The team published the work in Proceedings of the Royal Society B earlier this year.

This initial “study showed that dolphins are most likely to copy the signature whistles of close associates, shortly after the associate whistles,” Peter Tyack, a marine mammal biologist at the University of St. Andrews who was not involved in the research, wrote in email to The Scientist. The copying occurred when dolphins were separated from friends and family, and it seemed “they really want to reunite,” noted King.

But these dolphins had been artificially separated by the researchers, making it unclear whether whistle copying occurs between free-swimming dolphins, noted Laela Sayigh, an animal behavior researcher at the Woods Hole Oceanographic Institute who collaborated with King on the study.

If the signature whistles truly act as names, King and Vincent Janik, also at St Andrews, hypothesized that dolphins would respond to hearing their own whistles, as if addressed by another dolphin. To test this, the scientists recorded dolphins off the coast of Scotland, and stripped the whistle recordings of “voice cues” that signify who’s doing the whistling, retaining only the signature whistle itself.

It shows that signature whistles “are equivalent to human names, which makes this study very exciting,” said King.

“It’s often been hypothesized that another animal may copy [a signature whistle] to initiate contact, and this study supports that idea,” added Sayigh.

However, Tyack noted, when copying another’s whistle, dolphins introduce a minor but consistent change, which wasn’t reproduced in King’s latest study, and how these alterations influence dolphin responses remains to be seen. Sayigh agreed that much remains unknown about the specifics of dolphin call and response, such as whether an individual recognizes the voice of the dolphin copying its whistle.

Why dolphins may use “names” when other animals don’t appear to is also unclear, but King hypothesized that in addition to their intelligence, dolphins’ complex social structure and underwater environment, where limited visibility makes sound an important identifier, encouraged the evolution of vocal labeling.