Nothing is exactly what it seems in “Visual Inquiries: Artists Inspired By Science,” an exhibition on view at Pace University’s Peter Fingesten Gallery in New York City.

Some of the works on display appear to represent everyday things (Julia Buntaine’s sculptural hedgehog and serpent, for example) but are meant to portray scientific data (in this case, the shapes of typical brainwaves bent into steel wire and stacked atop one another). With other works, it is clear that the subjects relate to science, but the details of those connections may be difficult to guess.

In selecting the 11 visual artists to feature in the exhibition, curator Daniel Hill sought those “whose work has a strong aesthetic presence but is rooted in the conceptual foundation of the sciences in some way.”

“Every artist in the show has a different connection to science,” Hill told The Scientist. Math, physics, biology, ecology—all are represented in the paintings and sculptures on view, even if those connections are not immediately apparent.

On one wall, a navy blue board covered in craters recalls a physical map of an island chain. An abstract piece, it is meant to convey fractals—patterns that repeat in endless subdivisions, according to artist Taney Roniger. Roniger created this work, “Fenghuang #3 Indigo,” by taking a template pattern—a bifurcation, like a road splitting into two—and repeating it to create a larger pattern that pleased her. She then drilled the pattern into a slab of wood and painted it.

Although many of the pieces recall familiar sights, some of the participating artists said they did not necessarily set out to make representational works.

“[I was] just kind of exploring what happens when you take something that’s normally a two-dimensional form looked at on a screen and putting it into three dimensions,” said Buntaine of her creature-like brainwave sculptures. “I didn’t have a plan for how they would look; I just started stacking the brainwaves that I had folded into the same pattern on top of each other until they naturally led to what you see,” she added.

Paula Overbay’s paintings—collections of white dots on blue backgrounds—evoke a night sky or a brain. Asked how she chose the forms of her paintings, she said: “They kind of chose themselves. It’s not something that one can predict when you’re making so many small dots and trying to make masses of them or lines or things that look like clouds or the insides of clouds,” as in “Wind Machine.” Rather than trying to create an overall form, she said, Overbay tried to illustrate an idea rooted in science—molecular movement—and these are the forms that effort took.

Making art with science in mind: it’s an idea embodied by the entire exhibit.

Correction (October 25): This article has been updated to correct the spelling of Jonathan Feldschuh’s given name. The Scientist regrets the error. 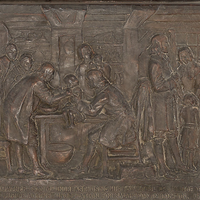