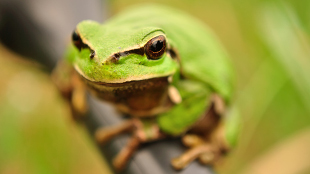 Tree frogs evolved in the tropics, but many, like this European tree frog (Hyla arborea), have adapted to temperate regions.SXC.HU, MIHAI TAMASILA

Analyzing climatic data and the evolutionary relationships of nearly 3,000 amphibian species, a pair of researchers has identified the primary causes of the class' species richness in the tropics. A study citing the swift evolution of new species and historically low levels of extinction around the equator, as well as an influx of species from cooler latitudes, was published today (September 10) in the Proceedings of the Royal Society B: Biological Sciences. In contrast, the researchers found that amphibian groups in temperate regions exhibited an inverse trend: cooler climates correlated with slower speciation and higher extinction rates, and generally do not attract new species dispersing from the tropics.

“The paper is remarkable in its reach to examine a diverse set of hypotheses for the...

The question of why biodiversity is highest in the tropics and sparser in temperate zones has fascinated scientists for centuries, predating even Charles Darwin and Alfred Russell Wallace. “The luxuriance and beauty of Tropical Nature is a well-worn theme,” Wallace wrote in the 1878 preface to Tropical Nature, and other essays, a book in which he attempted to document and explain the differences between tropical and temperate regions.

Today, researchers refer to the phenomenon as the latitudinal diversity gradient, which has been documented across taxa, time periods, and geography. Fully understanding global patterns of diversity remains a major research question, but biologists are inching closer.

The present study is a model for the kind of large-scale analyses needed to fully decipher the mechanisms driving diversity patterns. The authors combined existing data sets and new modeling algorithms for their investigation, drawing most significantly from the IUCN Global Amphibian Assessment and an evolutionary tree of amphibians they had developed in 2011. The Amphibian Assessment provided range maps for the world’s known amphibian species, from which the team was able to calculate climatic conditions for each. Amphibians make up one of the most abundant vertebrate groups on land, comprising about 7,000 species of frogs, toads, salamanders, and caecilians. Around 40 percent of those were included in the evolutionary tree used for this study. The authors also took advantage modeling algorithms released within the last few years, which require data from large evolutionary trees to function effectively.

“This is the big data approach to this long-standing question,” said co-author John Wiens, professor of ecology and evolutionary biology at the University of Arizona. Between the large data sets and powerful software, Wiens and his colleague Alex Pyron, an evolutionary biologist at George Washington University, were able to test detailed hypotheses on how speciation, extinction, and dispersal vary between amphibians in temperate and tropical zones.

While the study did not investigate why speciation, extinction, and dispersal differ across latitudes, the authors offered intriguing speculations. One potential explanation for the difference in the rates at which new species evolve within the regions, they noted, could be that “tropical climates foster higher rates of molecular evolution, leading to increased speciation rates.”

Extinction may be higher in temperate latitudes, the authors suggested, because glacial cycles have caused environmental conditions there to fluctuate more quickly, geologically speaking, than in the stable tropics. Amphibian species that couldn’t adapt to the changing climate would go extinct, thus trimming the evolutionary tree. This regular pruning has left ancient, well-adapted families—such as North America’s spadefoot toads and tailed frogs—in temperate regions, while tropical latitudes are full of younger, diversified families.

Lastly is the finding that amphibians often disperse from temperate zones to the tropics, but rarely the other way around. That could be a function of limited resources in cooler climates or simply colder winters that stop amphibian species from “crossing the line of death,” Wiens said.

Scientists are in the process of compiling comprehensive evolutionary trees of many more animal and plant groups, making it likely that large-scale analyses will grow more feasible. Like studies before them, they may not all agree on the mechanisms through which global diversity occurs. But one thing is clear, said Mittelbach: “They all point to the tropics as the engine of biodiversity, both as a cradle for the generation of new species and as a museum for the preservation of diversity.”