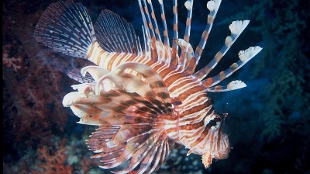 The red lionfish (Pterois volitans)WIKIMEDIA, ALBERT KOKThe story of Lauren Arrington and her science fair project, for which she exposed invasive red lionfish (Pterois volitans) in aquaria to brackish water to test the animals’ tolerance for low salinities, has taken on a life of its own. Several news outlets (including The Scientist) reported on how academic researchers followed up on Arrington’s project and confirmed her findings—that lionfish could survive salinities far below the previously established limit. But one researcher, former Florida International University (FIU) PhD student Zack Jud, is calling foul.

On Monday (July 21) Jud posted comments on his Facebook page expressing his frustration with the fact that his “name has been intentionally left out” of the flurry of online articles reporting the story. “The little girl did a science fair project based on my PREVIOUSLY PUBLISHED DISCOVERY of lionfish living in...

The Scientist contacted Jud to get a more complete accounting of what happened with Arrington’s science fair project and the subsequent Environmental Biology of Fishes paper, on which Jud was listed as first author. “The real issue is not about a science fair project,” he said. “It’s about acknowledging a scientist who has worked for years and years to solve these problems.”

Jud said that his frustration stems from how coverage of the story, which went viral after NPR did a piece last weekend (July 20) on Arrington’s project, omitted mention of his contributions to the study of the lionfish’s incursion into Florida’s estuarine habitats. “I’m not sure what happened, but my main issue is that the national media has presented a story that is sensationalized, and has left me out of the picture.”

In 2011, Jud and coauthors published an Aquatic Biology paper reporting his 2010 discovery of lionfish in the Loxahatchee River estuary near Jupiter, Florida. Then, in a 2012 issue of the Journal of Experimental Marine Biology and Ecology, Jud and his PhD advisor, North Carolina State University ecologist Craig Layman, reported findings from a 10-month mark-recapture study, in which they documented lionfish occurring in water as low as 8 parts per thousand (ppt) NaCl. This effectively extended the salinity tolerance range for lionfish to below 25 ppt, the previously accepted minimum.

In 2013, Arrington, the then 12-year-old from Jupiter, built her sixth grade science fair project around doing some experimental work to confirm that lionfish could indeed survive such low salinities. In media reports, the now 13-year-old student credits her father, Albrey Arrington, executive director of the Loxahatchee River District and a coauthor on Jud’s 2011 paper on lionfish in the Loxahatchee River estuary, with helping her with the project. “This [2011] paper did not experimentally define where in the river lionfish can live (i.e., what is the lowest salinity lionfish can live in),” Albrey Arrington wrote in an e-mail to The Scientist. “It simply made observations about lionfish occurrence and distribution in the Loxahatchee River.”

Arrington added that his daughter had read the paper, and attended public lectures given by Jud and Layman explaining its results, before coming up with her idea to test the fish’s salinity tolerances experimentally. “Lauren cited the 2011 Jud et al. paper in her science fair report and display—so she adequately provided credit to the authors,” he wrote. “Lauren’s experimental research (i.e., the experimental lowering of salinity to determine the lowest salinity lionfish can tolerate) was her own idea, and she did that work well before Dr. Jud and Dr. Layman conducted their experimental studies.”

Indeed, Jud and Layman published their results in Environmental Biology of Fishes this February. And in that paper, the authors noted Lauren’s contributions to their laboratory experimental design in both the methods section and in the acknowledgments.

But Jud maintains that news reports claiming that Layman was inspired by Lauren Arrington’s science fair project omit mention of Jud’s pre-existing plans to perform those experiments. “It was something that I had discussed with my advisor numerous times since the first discovery of estuarine lionfish,” said Jud, adding that his other work kept him from conducting the studies until after Lauren had done her science fair project. “As a busy PhD student, I had a number of other projects on my plate,” he said.

“The last thing I ever wanted to do is anything disparaging to a future young scientist,” added Jud, who completed his PhD at FIU in April and is now searching for academic positions. “It was just important for me to make sure that my years of research were recognized in conjunction with the young lady’s science fair project. Having my research discussed at this level could certainly help kick-start my career.”

Jud told The Scientist that after the first round of news stories came out about this sequence of events, he e-mailed Albrey Arrington, asking that he acknowledge his contributions to the research in any future news interviews. “This is still 100 percent Lauren’s cool story and it is completely fine if my name isn't mentioned at all,” Jud wrote in the e-mail to Arrington, which Jud provided to The Scientist, “but if my research is brought up as a lead-in or follow-up to Lauren’s project, I would appreciate it if it was properly attributed to me.”

Arrington replied to Jud in an e-mail: “We have mentioned you frequently in nearly all interviews. We have provided PDFs of your publications to nearly all reporters. Of course, the reprints show you as first author. I trust you understand reporters typically make the call on how to build the story to maximize interest. It has been my experience that reporters are not as interested in linking Lauren with ‘just’ a graduate student, rather they think it makes a way better headline to relate Lauren’s work to a ‘real professor.’”

In subsequent news stories, Jud’s contributions to the work were rarely mentioned, with most referring to the follow-up research as Layman’s alone. “It’s shocking to me that such a great story had such a negative twist to it despite my appeal to Dr. Arrington to properly attribute the research to me,” said Jud.

Albrey Arrington said he views this not as a case of what some media reports have described as his daughter’s “stealing” or “hijacking” of a scientific idea. Rather, he noted, the situation represents the natural progression of science. “Of course, if Lauren had ‘stolen’ their idea or plagiarized their material they would not have provided the very positive acknowledgement to Lauren in their paper,” Albrey Arrington told The Scientist. “Science builds step upon step, study by study, researcher by researcher, and it was awesome to see Lauren actually take part in and contribute to the scientific process.”

Still, Jud said he feels hard done by. “My years of work were omitted from a very interesting story that otherwise did a very good job about exposing people around the USA to this invasive species entering coastal systems.”

Layman could not immediately respond to The Scientist’s request for comment.

Update (July 24): In a post at his blog, Layman recounted the series of events. “I have been mentioned in many articles/stories/posts that have not named Zack [Jud] explicitly. This has not stemmed from any deliberate attempt to exclude Zack. I always do everything I can to promote students’ research programs,” he wrote.

“A young student did a really cool science project. It related closely to, and facilitated, a bunch of other important findings about lionfish,” Layman added. “I am glad tens of thousands of people now know about Zack’s research and Lauren [Arrington]’s project that never would have otherwise. But it is unfortunate how it played out in such a manner over the last few weeks.”