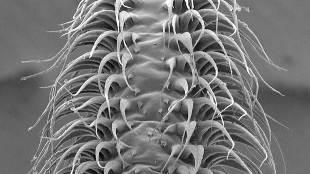 Scanning electron micrograph of the tip of Glossophaga soricina’s tongue after saline injection.CALLY HARPERThe tongue of the nectar-feeding bat Glossophaga soricana has a trick for getting the most out of every flower: scores of hair-like filaments, which usually lay flat, suddenly inflate and flare out in all directions within an eighth of second as the bat extends its tongue into the sugary liquid. Known as papillae, these filaments are made erectile by a hydraulic process in which blood is rapidly pumped through an intricate vascular system in the tongue, according to new research in which the bats were captured lapping at nectar on high-speed video.

The authors of the study, published today (May 6) in Proceedings of the National Academy of Sciences, claim that the physiological mechanism driving this rapid transformation of the tongue tip could inspire novel medical devices to probe and manipulate blood vessels and...

“It’s an impressive paper,” Kurt Schwenk, an evolutionary biologist at the University of Connecticut who was not involved in the study, said in an email to The Scientist. “I don't believe anyone suspected that the brush-like papillae on the tips of these bat tongues were so organized, let alone dynamic and moveable. The use of pressurized blood to erect the papillae hydraulically is especially surprising, and the authors have done an amazing job visualizing the process.”

Scientists have long known that the extendable tongues of nectar-feeding bats and birds have elaborate structures at their tips, but for decades they were thought to be passive. However, after researchers demonstrated in 2011 that the two tips at the end of the hummingbird’s forked tongue unfurl when they touch the liquid surface and roll inward during withdrawal, Brown University graduate student Cally Harper wondered if the brush-like papillae on the tips of G. sorinica tongues are also dynamic structures.

Harper and her colleagues first examined stained cross sections of the tongue under the microscope, and observed an intricate vascular system in which veins and arteries at the base of the tongue connect with papillae. “That was an exciting moment,” said Harper, “because no one had before described this direct and intimate vascular connection with the papillae.”

Studying high-speed video footage of the bat’s feeding, the researchers noticed that the papillae become erect during nectar feeding, flaring out from the surface of the tongue to resemble a mascara brush with every lap. They also saw that when the tongue first protrudes from the mouth, the areas of the tip where vascular connections are located are pale pink. But as the tongue reaches maximum extension those areas engorge with blood, just at the moment the papillae become erect. The blood was temporarily trapped at the tip and the papillae remained erect throughout the retraction of the tongue. The process is then reversed, with the blood draining from the tip, and repeated 8 times a second, with every lap of the tongue.

Finally, the researchers injected saline into the veins of excised post-mortem tongues and observed immediate papillae erection, demonstrating the direct role of the vasculature in the process.

Harper suggested the internal pressure created by the contraction of the tongue muscles during extension—a common mechanism behind tongue elongation in mammals—may help drive blood into the tongue tip. This synergistic combination of the vasculature and the muscles in which it is embedded could inform the design of medical devices, such as flexible endoscopes with dynamic surface configurations, she added. Such devices could be designed “to open up blood vessels and other biological tubes, and allow doctors to probe the walls [of blood vessels], to remove plaque, or look for cancer cells in intestines,” said Harper.

“There are huge advantages to a tool that has no fixed shape, which can be soft or stiff, and which can exert forces in multiple directions without joints and hard parts,” agreed Schwenk. “My guess is that engineers will be all over this, if they aren't already.”

Schwenk also argued for the importance of this sort of research. “Each animal is a laboratory embodying millions of years of trial-and-error experimentation leading to remarkable, often unique, outcomes that deal effectively with environmental challenges,” he said. “We can learn a lot from these diverse, evolved systems, and it is studies like this one that can lead us to novel, often unimagined solutions to our own challenges.”