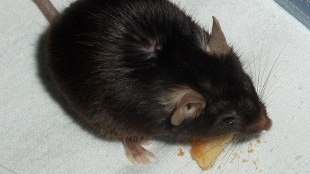 WIKIMEDIA, WUALEXScientists have shown a link between long-living calorie-restricted mice and the types of microbes residing in the guts of those mice. The finding, published last month (July 16) in Nature Communications, suggests a novel mechanism of living longer by establishing the right kind of microbes in our gut through a low-calorie diet.

“[The study] underlined the effectiveness of the healthy modulation of the gut microbiota along with diet specificities,” Jean-Paul Vernoux, a professor of food toxicology at the University of Caen in France who was not involved with the study, said in an email to The Scientist.

Caloric restriction has been known to extend life span in a variety of organisms, including humans, though the molecular mechanisms of this effect are not known. Recent research has begun to outline the role of the apparently innocuous microbes of the gut in modulating metabolism and immunity of their...

The team fed groups of mice a high- or low-fat reduced-calorie diet. As expected, mice on a low-fat, calorie-restricted diet lived the longest. Additionally, these mice displayed lowest body weight and fat content coupled with other healthy metabolic parameters such as glucose homoeostasis and a favorable serum lipid profile.

Using high-throughput sequencing, the researchers further showed that these calorie-restricted mice harbored a distinct population of beneficial bacteria such as Lactobacillus, as well as lower counts of harmful bacteria. Moreover, the microbial changes in the gut were concomitant with significantly reduced levels of serum lipopolysaccharide-binding protein (LBP), a soluble inflammatory protein that binds to lipopolysaccharide and other antigens and thus can be used as a blood-based biomarker of inflammatory response. This suggests that animals under calorie restriction can establish an optimal composition of gut microbiota, which in turn may lead to a better health by reducing overall inflammation.

Although more research is needed to translate these findings into humans, the study has far-reaching implications, Zhao noted. The idea of a balanced gut microbiota—with more beneficial microbes and fewer harmful ones—is an advantageous factor of a diet low in calories. However, the gut microbiome is also influenced by an individual’s genetic background and lifestyle, as well as environmental factors, he added, so a tailor-made personalized strategy would be the best approach to figure out how many calories to cut to attain an optimal bacterial community in the gut.

The researchers also suggest that such changes in the gut microbiota could be used as early warning signs of aging and age-related increase in inflammatory responses in the host. “We can analyze the composition of gut bacteria as a biomarker,” Zhao said. “We can also analyze serum LBP and see if that is increased or decreased.”

“There was a significant decrease of the negative to positive bacterial ratio correlated with life span in animals under calorie restriction,” said Vernoux. “It also justified the good positive role of probiotic Lactobacilli. The extrapolation to human is plausible, but it needs a lot of more work.”

Zhao’s team now plans to investigate the molecular mechanisms of how reducing caloric intake leads to changes in the gut microbiota, and would eventually like to run clinical trials to confirm these results.