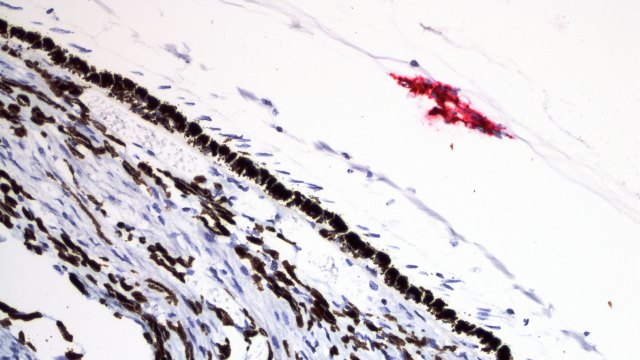 Ebola virus (red) in the eye of a rhesus monkey survivor COURTESY OF XIANKUN (KEVIN) ZENGAlthough the Ebola outbreak in West Africa that started in 2013 was declared over more than a year ago, the disease lingers on. Many Ebola survivors have suffered from joint aches, vision problems, hearing loss, headaches, and other symptoms, a phenomenon dubbed “post-Ebola syndrome.” Researchers studying macaques have a better understanding of why that might be: they’ve tracked the progression of Ebola virus through various tissues of monkeys who have survived acute infections and found evidence of long-term viral persistence and possible replication.

“[T]hey essentially found that the Ebola virus can persist in a number of sites that we consider immune privileged, including the eye, the brain, and the reproductive organs, or the testes,” Emory University opthalmologist Steven Yeh, who treated a high-profile case of eye inflammation caused by persistent Ebola virus...

As more and more patients survive Ebola infections, the lasting complications have become more of a public health issue, Mark Kortepeter, a University of Nebraska epidemiologist and retired US Army colonel, tells The Scientist. For example, Ian Crozier, an infectious diseases clinician who had been working in Sierra Leone during the outbreak, developed eye inflammation and was found to have Ebola virus replicating within the fluid of the inflamed eye several weeks after he’d recovered from his initial infection. (Yeh was Crozier’s ophthalmologist during this episode.) Scottish nurse Pauline Cafferkey developed meningoencephalitis more than nine months after recovering from Ebola, and Ebola virus turned up in her cerebrospinal fluid (CSF).

These cases “raised the question about persistence in other [immune-privileged] sites, but much is still unknown about whether and for how long [Ebola virus] might persist similarly in West African [Ebola virus disease] survivors,” Crozier, who studies Ebola persistence himself and has collaborated with the study authors but was not involved in the present study, tells The Scientist in an email.

To address questions about persistence, Xiankun (Kevin) Zeng, who studies Ebola virus at the United States Army Medical Research Institute of Infectious Diseases (USAMRIID) in Maryland, turned to monkeys. In tissue samples from rhesus macaques that had survived experimental Ebola infection, Zeng and his team detected Ebola virus RNA and proteins in the same immune-privileged sites where it has been found to persist in humans, they report today (July 17) in Nature Microbiology. Based on their data, they have developed a model of how Ebola travels from the blood into its immune-privileged hideouts over the course of the disease.

Zeng and his team examined archived tissue samples of the brain, testes, and eye from rhesus macaques that had been infected with Ebola as part of another study and had survived the infection (though these animals were euthanized at the conclusion of the earlier study). About 10 percent of the macaque survivors—11 out of 112—had Ebola virus RNA in the eye, testes, or brain, as detected by in situ hybridization.

In order to understand the progression of Ebola from an acute infection to a persistent one, the researchers examined archived samples from three groups of monkeys: those that died 5 to 11 days after Ebola virus exposure, termed acute course of disease death; monkeys that lasted a bit longer, termed delayed time of death; and the survivors. (Note that the animals were not allowed to die of Ebola; rather, they were euthanized when their symptoms became severe, Zeng says.)

“[In] these three groups of monkeys, we find that they all have totally different patterns,” Zeng says. In the monkeys that succumbed quickly to an acute infection, the virus was detected in the endothelial cells of the blood vessels of all three tissues examined. In those with a delayed time of death, the virus showed up in a broader swath of the infected tissue and was no longer detected the blood vessels. Finally, in survivors, the virus had left the endothelial cells and remained in a particular area of the immune-privileged site.

Inflammation was a common feature of all three immune-privileged sites where Ebola persisted in the survivor macaques. “Detection of virus was associated with pathologic inflammation (most notably in the eyes) where changes described are consistent with the clinical disease being characterized in humans,” Crozier notes.

Additionally, all three tissues were characterized by the presence of CD68+ macrophages. In fact, the researchers detected Ebola within the macrophages. The same tissues from uninfected control macaques did not have inflammation or macrophages at these immune-privileged sites. Zeng says that he suspects that once the Ebola virus breaks through the blood vessel and, in the brain, bypasses the blood-brain barrier, immune cells, including macrophages, rush to the site of tissue damage, causing inflammation and making themselves vulnerable to Ebola infection.

The researchers detected not only the viral RNA genome but also its complement, the viral anti-genome, in all three survivor tissues, suggesting that the virus was replicating when the survivors were euthanized.

University of Nebraska’s Kortepeter, who has worked with Zeng and his colleagues at USAMRIID but was not involved in the study itself, notes that “the current animal models of Ebola are designed, essentially, to lead to fatality.” He wonders if “there would be an interest in reducing the challenge dose such that there would be more survivors and then you’d have more potential to find this phenomenon.” Zeng has been considering this strategy too.

In another study published today in JAMA Neurology, the researchers examined a group of human Ebola survivors who had reported various neurological symptoms during or after their acute infections. CSF from each participant was collected via lumbar puncture, yet none of the seven study participants had detectable Ebola virus RNA.

The case of Pauline Cafferkey, who had viral RNA in her CSF when she developed meningoencephalitis, was one motivation for the present study, the authors write; however, the CSF results from the patients in the present study differ from Cafferkey’s. “I was a bit surprised initially. But in hindsight not so much,” NIH neurologist Avindra Nath, who led the study, tells The Scientist in an email. “These patients were stable, with neurological deficits yet no progression and were several months out from the initial infection. If they would have had detectable virus in the CSF they would have been much sicker with progressive neurological deficits.”

The authors write that this could relate to the long period between the acute infection and the lumbar puncture. Alternatively, they suggest that if Ebola were dormant within the CNS and associated with particular cells, it might not be released into the cerebrospinal fluid.

So did these patients have persistent virus or not? “In virology the terms persistent and latent mean very different things,” Nath says. “‘Persistent’ refers to on going replication of the virus, which they clearly did not have. Although this does not rule out the possibility of latent virus, which would mean that the virus is in some tissue reservoir but is not replicating.”