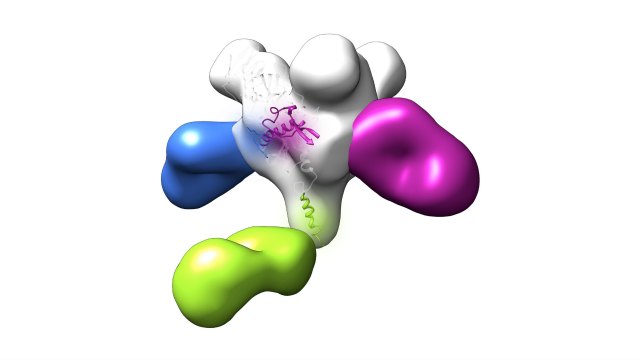 The Ebola virus glycoprotein spike (white) bound by antibody fragments of the broadly neutralizing antibodies ADI-15878 (purple), ADI-15946 (blue), and ADI-16061 (green). Footprints of these antibodies identify the key sites of Ebola vulnerability to human antibodies.COURTESY C. DANIEL MURIN, PHDIt was only a year ago when the West African Ebola public health emergency ended, yet another small cluster of infections has popped up in central Africa, in the Democratic Republic of the Congo. An experimental vaccine is at the ready if needed, and numerous others are in the pipeline, along with new therapies.

In developing these vaccines and therapies, researchers have looked to survivors of Ebola infection for clues as to how they might put a stop to the virus. Today (May 18) in Cell, Kartik Chandran of Albert Einstein College of Medicine and collaborators described antibodies retrieved from a patient that could shut down not... 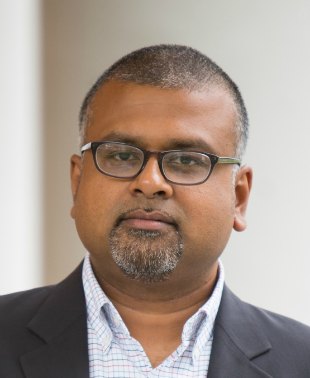 Kartik Chandran ALBERT EINSTEIN SCHOOL OF MEDICINEThe Scientist: What has been accomplished previously in looking for antibodies against Ebola?

Kartik Chandran: What was done before was to isolate these antibodies from B cells from this person’s blood and then the antibodies were examined for their ability to bind and block infection by Ebola Zaire, which was the same virus this person had been infected with. [Those results were published in Science in 2016.]

How our study follows up is we actually looked at the ability of these antibodies to protect against divergent Ebolaviruses. So our focus is really on identifying and characterizing broadly neutralizing, protective antibodies that were in this collection.

TS: Was this expected that a person who was infected with Ebola would have antibodies that could neutralize other strains?

KC: There’s really only one prior study looking at the breadth of human antibodies against Ebola. [The] thing that comes out from our work is, even though this is an acute infection and the individual from whom these antibodies are being isolated is seeing this virus for the first time, we’re still seeing these broadly neutralizing and protective antibodies, although they are a very minor component of the total antibodies. Nevertheless, they do exist.

This is distinct from other viruses like HIV, dengue, or flu where you’re either looking at a long-term, chronic infection where there’s this ongoing arms race between the virus and the immune system, or you’re looking at multiple infections over a period of time that can select out specific antibodies that are broader.

TS: How might these antibodies contribute to a therapeutic or vaccine?

KC: One way to do this would be to make an antibody cocktail that you would inject via IV into a person. This would be analogous to ZMapp, for example, [in which doctors would] treat a person diagnosed with the virus and showing clinical signs.

It could also be used prophylactically, which is to say that if they came into contact with someone who has been infected, because the antibodies stay in the blood stream for a long time, you could actually start dosing someone [before an infection takes hold].

Currently, ZMapp is the state of the art in terms of an antibody therapeutic. It’s incredibly effective in nonhuman primates. . . . The problem with ZMapp is that it’s specific to Ebola Zaire. . . . That’s where these antibodies we’ve described in this paper come in because we have preliminary data that’s promising that we should be able to develop this into a cocktail that can protect against all Ebolaviruses.

On the vaccine side, the existing vaccines elicit antibodies in people that recognize or neutralize or otherwise block the activity of the Ebola glycoprotein. People are working on multivalent vaccines that would hit different strains of Ebola, but that’s going to be made by mixing different vectors or having a single vector express multiple antigens.

What we’re talking about in terms of vaccines is different. Now that we know that these broadly reactive and protective antibodies can be elicited, we have some ideas for how to design new immunogens that would elicit these kinds of antibodies. I should stress this is theoretical, we haven’t done anything at this point.

The goal would be to give somebody a single vaccine and they would be protected against all Ebolaviruses. . . . This work shows it should be possible to make such vaccines. But “should be possible” and actually doing it are different things.

Chandran’s collaborators on the study include researchers at Mapp Biopharmaceutical, which developed ZMapp.