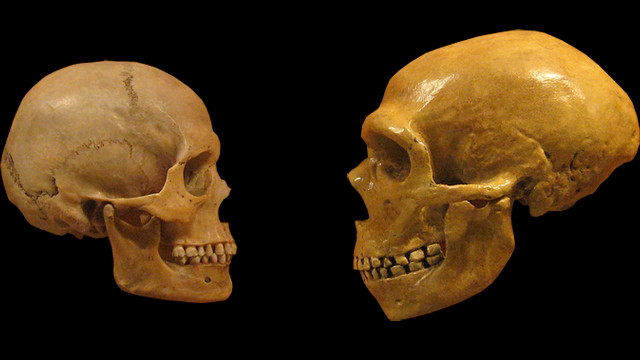 WIKIMEDIA, HAIRYMUSEUMMATTPeople of Caucasian descent have, within their genomes, small amounts of Neanderthal DNA. Previous studies have shown this ancient DNA may influence a person’s health, but a new study in the American Journal of Human Genetics today (October 5) reveals that the effects of one’s inner Neanderthal are even more wide-reaching.

“[This study] is looking at a huge cohort and at a different set of traits than have been directly analyzed before, many of which are nonmedical,” says evolutionary and computational geneticist Tony Capra of Vanderbilt University who was not involved in the current study but performed a similar analysis of Neanderthal-influenced medical traits last year. “And what’s really exciting is that even though there was this broader scope of traits that was considered, they point to effects of Neanderthal DNA on similar systems to what’s been seen previously.”

After the 2013 discovery that Neanderthals interbred with...

Being a self-described night owl and being prone to daytime napping were both traits positively influenced by Neanderthal variants, as were loneliness, low mood, and smoking.

To answer such a question, Kelso explains, “you need really large sample sizes” as well as both phenotype and genotype data. “That kind of data really hasn’t been available until the last couple of years,” she says, and those datasets that are available tend to be based on medical phenotypes, meaning “you couldn’t look at normal phenotypes, like height and weight, what you eat, and the color of your hair.”

That all changed in 2015, when the UK Biobank released to qualified researchers data on 500,000 volunteers who had undergone genotyping, answered detailed and wide-ranging questionnaires about themselves, and were having their health monitored long-term. “When we saw that the data from the UK Biobank was becoming available we were really excited,” Kelso says.

Kelso and her team first narrowed the sample to include only the 112,338 individuals with white European ancestry (whose genomes contain Neanderthal DNA), and used these data to tease out which traits are influenced by Neanderthal genetic variants. The traits they identified included those that affect hair color, skin color, skin tanning and burning, sleeping patterns, mood, and tobacco use.

That traits such as skin color, sun-burning, and sleep patterns were identified by the analyses might be explained by the Neanderthals’ adaptations to life at more northern latitudes, suggests Capra. But for other traits, he notes, determining how the effects seen in present-day people might once have affected Neanderthals themselves “is one of our crucial challenges.” For example, he says, “of course, Neanderthals were not smoking.”

What would really help to generate a better picture of what Neanderthals were like, says Capra, is to have more high-quality DNA samples from Neanderthal specimens. He is therefore very excited about another paper published today in Science by Kelso and a different group of colleagues. The team reports the high-resolution sequencing of a new female Neanderthal genome extracted from a bone found in a Croatian cave. Being an estimated 50,000 years old, the specimen is close in time to when Neanderthals are thought to have interbred with humans.

This high quality genome means “we have a new reference point to try and triangulate how the Neanderthals themselves evolved and what they looked like when they were interbreeding with us [the ancestors of modern Europeans],” says Capra.

The sequencing of this new genome also represents “a real technical advance,” says anthropologist John Hawks of the University of Wisconsin. Until now, the only high-quality Neanderthal DNA has come from a cave in Denisova in Siberia, where DNA is well-preserved because of the freezing temperatures year-round, Hawks explains. But the new genome came from bones found in a more temperate cave, where DNA preservation is suboptimal.

“That they have got a high-coverage genome from such specimens indicates that we may see more of this genetic data from a wider range of locations coming in the future,” Hawks says.