Electron microscopes (EMs) generate the most detailed images of organic structures available, but the view they offer has always been in black and white. Now, for the first time, researchers have developed a method for capturing EM images in color. The technique, described today (November 3) in Cell Chemical Biology, involves staining cellular components with metal ions that emit unique signals under the scope, which can then be rendered as vivid colors. Previously, EMs could not distinguish between different types of molecules, so colors had to be painted on afterward. Removing this barrier may open a window onto fine-scale cellular organization that has never before been visible.

In their paper, researchers from the University of California, San Diego (UCSD), not only show that the method works, they also demonstrated three different applications that would not be feasible using standard EM sample preparation. They generate an image of two astrocytes...

The technique has been in the works for more than a decade. Several UCSD labs contributed to the study, including the lab of the late Roger Tsien. Richard Leapman, a biophysicist who studies EM at the National Institute of Biomedical Imaging and Bioengineering in Bethesda, Maryland, and was not involved in the research, observed that the methodological advance is analogous to Tsien’s Nobel Prize–winning research on green fluorescent protein (GFP). Fluorescent proteins allowed specific molecules to be tagged and illuminated in live cells under a light microscope.

The problem, Leapman said, is that “there was no equivalent to that in electron microscopy.”

EMs create images by shooting a beam of high-energy electrons straight through a sample and then analyzing the “shadow” that is cast. “When you look at an electron micrograph, what you’re looking at is just density,” Leapman explained, “there’s no chemical signature.” Specific proteins can be stained with gold particles delivered by antibodies, causing targeted locations to show extra dark on a micrograph, but the end result is still a low-contrast, black-and-white image.

Using gold labeling, “there’s no easy distinguishing between the specific label and the general cellular structure,” study coauthor Stephen Adams of UCSD told The Scientist. The antibodies that deliver gold particles to the cell are also introduced through holes punctured in the membrane, as a result of which “you sacrifice the ultrastructure [of the sample] to get the antibody in,” he added. Adams’s team worked out a way to resolve both problems.

The multicolor labeling process involves a succession of clever chemical reactions during sample preparation and some post-production image doctoring.

First, the researchers tag cell structures to be viewed in color with the same type of fluorescent labels that might be used in light microscopy. These small, commercially available molecules latch onto target molecules and penetrate tissue more effectively than larger antibodies. The researchers next bathe the sample in diaminobenzidine (DAB), a carrier molecule with a lanthanide ion as its cargo.

The process exploits a quirk in the chemistry of fluorescent labels. When certain fluorescent labels are hit with radiation of a specific wavelength, they generate an unstable, high-energy version of an oxygen molecule called a singlet. “That’s something biologists try to avoid” under normal circumstances, Adams said, “but we take advantage of it.”

In the presence of singlet oxygen, DAB turns into a sticky polymer that glues onto anything nearby. In this case, it effectively labels the target structures with lanthanide ions.

Currently, the researchers are able to employ two different lanthanide labels, Cerium (Ce) and Praseodymium (Pr). So they repeat this staining process for each element, irradiating the sample at different wavelengths of light to ensure each tag winds up where it should.

With Ce and Pr attached to their target proteins, researchers are able to “see” these two elements using a type of EM called electron energy-loss spectroscopy (EELS). EELS differentiates the two elements based on the way they deflect and absorb energy from an electron beam. The result is a set of three images: one showing the location of Ce, another the location of Pr, and a third, a normal transmission EM (TEM) micrograph.

The finished product is a multicolored  overlay of all three images. “When we first saw the images it was like, Wow! That’s better than we ever thought,” said Adams.

In one experiment, the team traced the movement of PKM-zeta, a protein thought to strengthen the connection between neurons. “We had the functional evidence that [PKM-zeta] maintains memory because, if you inhibit it, memories get erased,” said Todd Sacktor, a neurologist at SUNY Downstate Medical Center in New York City who was not involved in the study. “But we didn’t know where it was in the cell.”

The synapse is difficult to image with standard EM; neurotransmitters and cellular structures typically show up on micrographs as a single, dark blotch. Staining proteins with gold particles only contributes to the dark mass, yielding low-contrast images that are difficult to interpret. But the UCSD team brought PKM-zeta into bright contrast within the synapse, showing it clustering near the post-synaptic membrane. The images are “just dramatic,” Sacktor said. “That’s the advantage of the color.”

“Usually with these things, when you get something to work, you can make it better,” Leapman pointed out. “I’m sure there will be a lot of people who will want to try this,” he added. “I was excited when I read it. I would love to have a chance to try this.” 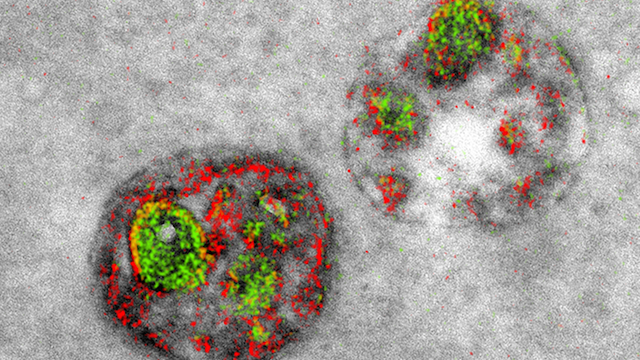 Elemental maps of Ce (green) and Pr (red) overlaid on a TEM image of an endosomeS.R. ADAMS ET AL.