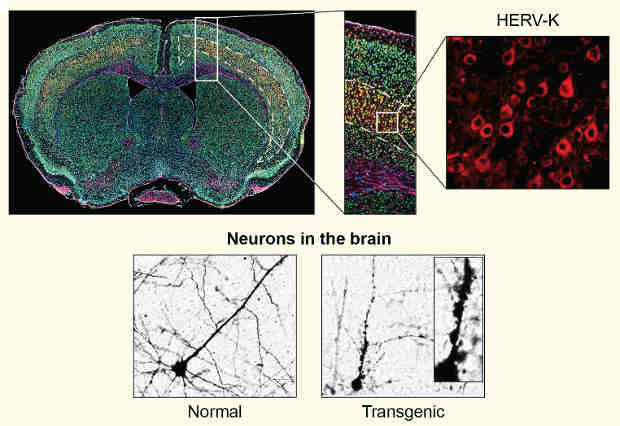 Transgenic mice expressing the HERV-K env gene suffered neurodegeneration and motor symptoms characteristic of ALS.AVINDRA NATHAn endogenous human retrovirus called HERV-K is expressed at higher levels in the brains of amyotrophic lateral sclerosis (ALS) patients than in those of controls, and the virus is toxic to human neurons in culture, according to a study published this week (September 30) in Science Translational Medicine. Researchers further showed that mice expressing the HERV-K envelope gene develop symptoms of ALS, suggesting that the retrovirus may play a causal role in neurodegeneration.

“The new study is substantial and impressive in that it has employed a wide range of powerful in vivo and in vitro molecular biological, immunological, genetic, and other techniques,” Jeremy Garson, a medical virologist at University College London who was not involved in the work, wrote in an email. “The new data presented in the paper represents a...

“It’s a very, very important paper,” said Mount Sinai’s Daniel MacGowan, who also did not participate in the research. But, he added, “it didn’t show the smoking gun [at the molecular level] so there’s still the possibility that it’s an epiphenomenon. . . . We need more brain samples.”

In 2006, neurovirologist Avindra Nath of the National Institute of Neurological Disorders and Stroke saw a young man who had both HIV and ALS. When the patient started taking antiretroviral drugs to treat his HIV, his ALS symptoms improved, Nath recalled. “I thought that was quite fascinating.”

Endogenous retroviruses constitute nearly one-tenth of the human genome. While most of these viruses have accumulated mutations that make them inactive, researchers now know that they can sometimes come back to life—and cause major problems. The human T-cell lymphotropic virus type 1, for example, has been implicated in various cancers and may spur neurodegeneration in the spinal cord.

Sure enough, when Nath and his colleagues searched for a variety of human endogenous retroviruses (HERVs), they found elevated levels of HERV-K transcripts in the brain tissue of deceased ALS patients but not in samples from healthy patients or individuals with Parkinson’s disease. In the latest study, Nath’s team explored whether the virus itself is neurotoxic, or if it was simply a byproduct of the motor neuron degeneration characteristic of ALS.

The researchers first synthesized the viral genome and transfected the whole thing or just the envelope gene (env) into cultured human neurons. Both treatments triggered the retraction of cell-body projects called neurites as well as neuronal death. Using CRISPR to activate the endogenous retrovirus in the cultured cells had the same effect. And expressing the HERV-K env gene in mice caused that the animals developed classical symptoms of ALS. Altogether, the results highlight a role for HERV-K in ALS pathology.

“We haven’t proven that the virus causes ALS,” Nath said. “What we’ve shown is that the virus antiviral product may play a role in the pathophysiology of ALS.”

“Although this does not necessarily define primary causality, these data certainly underscore that activation of HERV-K and viral proteins such as env can accelerate motor neuron pathology,” Robert Brown of the University of Massachusetts Medical School and King’s College London’s Ammar Al-Chalabi, who were not involved in the research, agreed in an accompanying commentary. “From a clinical perspective, several important questions arise. . . . Perhaps most importantly, can one now define a cocktail of antiretroviral interventions that are beneficial, and will the activity of the retrovirus prove to be a quantitative biomarker of disease activity?”

Indeed, Nath is eager to see if the identification of HERV-K’s probable role in ALS pathology may provide a new target for drug developers in a field that has for decades come up empty-handed. “Even if you don’t know the cause, if you can find a key molecule in the pathway you can block it and impact the course of the disease,” he said. “We think we have a key molecule.”