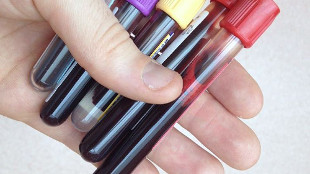 WIKIMEDIA, TOM MALLINSONDelivering DNA that results in the production of a tumor cell-specific reporter protein detectable in the blood could be a new method for earlier tumor identification, according to a proof-of-concept study published today (February 23) in PNAS.

“It’s unconventional . . . that they tried to use an engineered biomarker,” said Andrei Drabovich of the University Toronto who was not involved in the study. He raised concerns about the reported rate of false-positives, since low amounts of SEAP were also produced in mice without tumors. “It’s probably not ready yet for screening applications in the general population, but you can definitely find some niche when it comes to cancer patients or suspected cancer patients,” Drabovich said.

“I wouldn’t say that it would be so safe and with no concerns that we could apply it to everybody, but it does open up opportunities to screen high-risk patients,” agreed Ho.

“The system sounds nice and it is quite interesting, there is no question about it, but the claims in the paper go far beyond what is actually demonstrated in my eyes,” said Harald Mischak of the University of Glasgow who was not involved in the research. “I see no value in a general tumor marker. It would just produce a lot of anxiety in the patients, and is of no help if you don’t know where the tumor is,” added Mischak—particularly if the tumor is too small to be clinically relevant.

Gambhir countered that the current system is not powerful enough to be concerned about detecting insignificant tumors. “We think we can get down into the cubic millimeter range, which is still millions of cells, but we don’t think we could detect one or 10 or 100 or 1,000 cells sitting somewhere in your body. So sensitivity is probably a bigger problem than specificity,” he said, adding: “The problem is more [that] when you don’t see SEAP in the blood, [it] doesn’t mean there isn’t a tumor.”

Ho, on the other hand, said the sensitivity appeared quite good but that specificity could be an issue due to a “leaky” or poorly regulated promoter. But both the promoter and the reporter genes could be switched out for different purposes, Gambhir pointed out. “The system was designed to be fairly modular so that you could take minicircles and disrupt [them] in different ways and still get signal in the way you would desire,” he said.

Gambhir and his colleagues are now investigating the use of less leaky or more organ-specific promoters, as well as reporters that could also be used to image the tumor or be expelled in urine or breath for easier detection. The researchers are also designing an oral delivery system for the minicircles to address concerns like those voiced by Drabovich that systemic injection or transfection could be toxic for human patients.