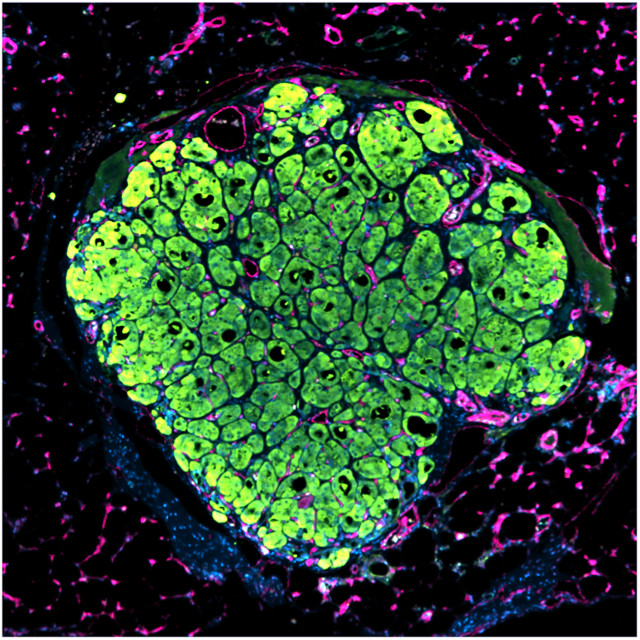 Microscopic image of a liver tissue seed grown in a mouse (hepatocytes in green, blood vessels in magenta)CHELSEA FORTIN, KELLY STEVENS, UNIVERSITY OF WASHINGTON, SEATTLE, SANGEETA BHATIA, MIT, BOSTONEngineering human livers is a lofty goal. Human liver cells, hepatocytes, are particularly difficult to grow in the laboratory as they lose liver functions quickly in a dish. Now, in a study published today (July 19) in Science Translational Medicine, researchers show that a “seed” of human hepatocytes and supporting cells assembled and patterned within a scaffold can grow out to 50 times its original size when implanted into mice.

These engineered livers, which begin to resemble the natural structure of the organ, offer an approach to study organ development and as a potential strategy for organ engineering.

“What blew my mind is that when we implant these tissues into a mouse with liver injury, the tissue seeds...

“This is a very exciting approach and another demonstration that we can build a basic liver unit using three basic cell types,” says Tammy Chang, an assistant professor of surgery at the University of California, San Francisco, who studies liver tissue regeneration and was not involved in the latest work.

In 2011, Bhatia's lab showed that human liver-cell aggregates could be grown in mice. She and her colleagues assembled human hepatocytes and supportive stromal cells within a polymer scaffold, demonstrating that this dime-size artificial human liver tissue could grow stably for weeks in immune-compromised mice that had their own normal livers. The liver implant, the researchers found, fused with the mouse circulatory system and received blood to perform a few liver functions.

In the new work, the lab wanted to expand the size of the human liver graft beyond the 1 million cells used in the prior model. The team assembled different geometries of human primary hepatocytes, human umbilical vein endothelial cells, and fibroblasts, placed them within a degradable hydrogel, and implanted the tissue seed into a fat pad within a liver-injury mouse model.

To recapitulate liver damage, the animals are missing a key amino acid metabolism gene that results in toxic metabolite build up and progressive liver failure, which can be rescued by a drug used to treat individuals with a similar genetic disorder. Stevens says her group chose this model because it they expected it to foster the liver seeds’ growth. “The hypothesis is that mouse liver injury will produce factors that will travel through the blood stream and tell the human liver tissue to regenerate,” explains Stevens.

The human liver seed tissue grew best, the researchers found, when they assembled endothelial cells into rope-like structures on top of the hepatocytes, rather than when the tissue was a spherical aggregate of all three cell types. The patterned tissue formed new structures in vivo, including ones that resembled bile ducts, and contained pockets of red blood cells, suggesting the presence of vascular structures within the tissue. The organ-like structures also produced appropriate human proteins such as albumin and transferrin.

“These results clearly suggest that the geometric design of a transplant graft is an important consideration for [organ engineering], at least for an ectopic implantation approach,” Takanori Takabe, whose lab at Yokohama City University in Japan is developing organs from stem cells and who was not part of the study, writes in an email to The Scientist.

Researchers have been using stem cells to make organoids in a dish, miniature three-dimensional cell clusters, which are used to study the biology and formation of organs.

“At the moment, it is a great and unique research tool to understand liver growth,” Eric Lagasse, who works on stem cells and organogenesis at the University of Pittsburgh and was not involved in the study, writes in an email to The Scientist.

For Chang, a major question is what is special about this liver injury model. “The robust growth of the liver tissue here may be unique to this form of livery injury and it would be interesting now to understand the factors that promote regeneration and growth of these liver tissue aggregates,” she says.

And, of course, there’s the question of utility in humans, notes Stevens. “Could we eventually get this to the level where it can be transplanted into patients to provide them with some liver function?”