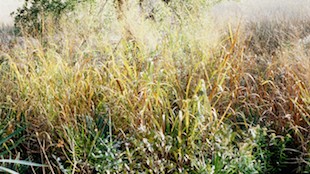 USDA-NRCS PLANTS DATABASE, ROBERT H. MOHLENBROCK Researchers from the University of Georgia and at Tennessee’s Oak Ridge National Laboratory have engineered the thermophilic bacterium Caldicellulosiruptor bescii to directly convert switchgrass into ethanol, according to a study published today (June 2) in PNAS. The new approach eliminates the need for expensive chemical and enzymatic treatments required to prepare grasses for ethanol production, potentially easing the way for use of sustainable feedstocks like switchgrass to produce biofuels.

“It’s a novel approach to turning cellulose into ethanol,” said David Tilman, an ecologist at the University of Minnesota who was not involved in the study. But the approach is not yet commercially viable, he added: “The alcohol production is way too low, but it’s something that can be worked on and developed.”

“It’s a very well-designed set of experiments that really elucidate the potential of where to go for the next steps,”...

Ethanol, a liquid biofuel that is mixed into most gasoline in the U.S., can be created from the glucose stored in plants. Most U.S. ethanol comes from the starchy, edible portion of corn, which contains easily accessible glucose. But non-edible biofuels—such as grasses and some woods—have the potential to be more sustainable sources of fuel.

Switchgrass, for instance, is a perennial that can be grown in poor-quality soil, takes little energy to cultivate, and does not compete with food crops. Ethanol from corn, on the other hand, yields just about the same amount of energy as it costs to produce. Switchgrass could potentially produce 500 percent more energy than is required to cultivate and process it, while offsetting carbon emissions from burning ethanol by efficiently sequestering carbon in the soil, the authors noted.

One downside is that plants like switchgrass are filled with glucose-trapping lignocellulose, the cell wall material that helps plants to stand up straight. Creating ethanol from lignocellulosic plants currently requires several steps. First, technicians break the plant matter down into tiny pieces using mechanical force and chemicals such as acids or bases. Next, they free glucose from inside lignocellulosic walls using a series of enzymes. Finally, they use microbes—typically yeast—to convert the glucose into ethanol. The process of breaking down lignocellulose requires expensive metal reactors, enzymes, chemicals, and energy, said McMillan.

The researchers sought to engineer a bacterium to directly convert switchgrass into ethanol, with no need for chemical and enzymatic treatment. They selected C. bescii because it naturally produces enzymes that free glucose from lignocellulose. It is also a hyperthermophile, meaning it thrives at 80 degrees Celsius. Biomass pretreatment requires high temperatures, which help open up cell walls, making this species ideally suited for the task.

The researchers then engineered C. bescii to express a gene that the bacterium Clostridium thermocellum uses to make ethanol, a bifunctional acetaldehyde and alcohol dehydrogenase.

“We chose to take an organism that does the hard thing—digest lignocellulosic biomass— and we engineered a pathway to ethanol,” explained coauthor Janet Westpheling, a microbial geneticist at the University of Georgia.

The researchers also deleted the gene for lactate dehydrogenase, since it produces lactate, which competes with ethanol as a glucose product. They then fed the bacteria shredded switchgrass. The engineered bacteria converted 60 percent of glucose units to ethanol.

“It’s a first step, but it was a really good first step,” said Westpheling. She noted that to be considered for commercial development, the bacteria will need to convert glucose to ethanol with 80 percent to 85 percent efficiency. To meet this benchmark, her team is now deleting genes encoding enzymes that produce acetate and hydrogen, two other products that compete with ethanol.

Once Westpheling and her colleagues get C. bescii to convert glucose more efficiently, they will pass on the project to engineers and chemists, who will figure out how to make higher volumes of ethanol and otherwise optimize the process.

McMillan noted that the team will also need to prove that bacteria, rather than the traditional yeast, can convert glucose to ethanol at an industrial scale. “The challenge has been the bacteria are more fastidious, they’re tougher to cultivate at scale,” he said.

And there remains the challenge of getting biofuel producers to invest in lignocellulosic feedstocks like switchgrass. Switchgrass takes two to three years to grow before it is ready for its first harvest, McMillan said, and it is unclear who will pay the upfront costs of establishing it as a biofuel crop. It will also have to compete with other alternative feedstocks such as corn stalks and leaves.

Westpheling said that bioenergy is key to addressing climate change, as plants—particularly perennials like switchgrass—offset the emissions of burning fuel by sequestering carbon from the atmosphere in the soil. “We have to see that the long term of putting carbon dioxide in the atmosphere is bad,” she said.

“Right now we have lots of ideas that don’t work quite well enough,” said Tilman. “Maybe this will be the idea that will work well enough.”