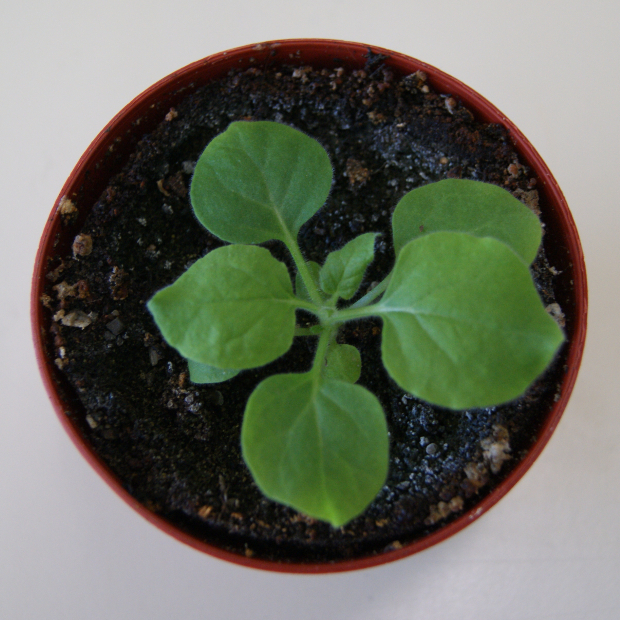 Nicotiana benthamianaWIKIMEDIA, CHANDRESThe CRISPR/Cas9 system can be used to deliver stable molecular immunity against DNA viruses that infect plants, according to a study published this week (November 10) in Genome Biology. Researchers at Saudi Arabia’s King Abdullah University of Science and Technology have so far tested the gene-editing tool in Nicotiana benthamiana, a relative of the tobacco plant often used in studies on plant-pathogen interactions. If the approach works in crops like the tomato, viral resistance could minimize crop loss and its economic consequences, the researchers noted.

“The study is a proof of concept that CRISPR/Cas9 can be used to destroy DNA viruses and block viral infection and disease progression,” said Yinong Yang, who studies molecular plant-microbe interactions at Pennsylvania State University but was not involved in the work. “RNA interference has been tried to control DNA viruses in plants, but it has not worked...

Based on the reported results, “I believe that the CRISPR-Cas9 system can be extensively applied as a new weapon at a molecular level to protect plants from DNA viruses,” Jianwei Zhang of the University of Arizona and the Arizona Genomics Institute, who was not involved in the work, wrote in an email to The Scientist.

Magdy Mahfouz, an assistant professor at the Center for Desert Agriculture at King Abdullah University, and his colleagues used CRISPR to target the tomato yellow leaf curl virus (TYLCV), a single-stranded DNA virus that infects tomato plants. Thus far, there are no adequate ways to control TYLCV, the most destructive tomato pathogen, according to Zhang. The present study, while not the first to use the CRISPR genome-editing tool to target and degrade plant viral DNA, is the first to demonstrate the ability to curtail TYLCV infection.

“We [show] the portability of the CRISPR/Cas9 system to confer molecular immunity in plants against invading viruses,” Mahfouz wrote in an email. “Two [other] reports just came out with similar conclusions, which is quite reassuring to the community.”

“That these three studies targeting CRISPR/Cas9 against three different DNA viruses all come to the same conclusion suggests that this is a broadly applicable system,” said Daniel Voytas, director of the Center for Genome Engineering at the University of Minnesota, a coauthor on one of the other studies.

According to study coauthor Zahir Ali, a postdoc in the Mahfouz laboratory, the team is now working to create plant lines that can pass on the CRISPR-mediated viral resistance to the next generation. The researchers are also testing the expression of the CRISPR/Cas9 machinery in tomato plants. “We are now applying this technology in key crop species, including tomato, for virus resistance,” Mahfouz noted.

The current process introduces foreign DNA into the plant genome, which may classify such plants as genetically modified organisms (GMOs). “We have thought about ways to do this in a non-GMO way but, for now, these are not obvious because you need all of the elements in the plant, poised and ready to take on an infecting virus,” said Voytas.

Both Yang and Voytas see clear benefit in improving food sources using CRISPR. “This is a strategy that could increase productivity, save billions in crop losses, and provide sustainable food for those around the world,” said Voytas.