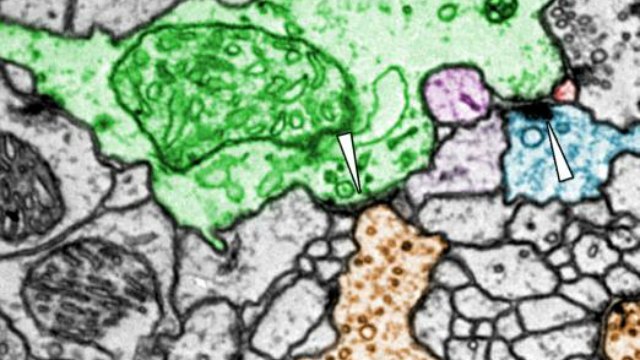 A database of electron microscopy images reveals the connections of the entire female fruit fly brain. In this image, types of Kenyon cells (KC) in the mushroom body main calyx are labeled by color: αβc-KCs are green, αβs-KCs are yellowish brown, and gamma-KCs are blue. The white arrows point to visible presynaptic release sites.ZHENG ET AL. 2017A 21-million-image dataset of the female fruit fly brain is offering an unprecedented view of the cells and their connections that underlie the animal’s behavior. The full-brain survey, taken by electron microscopy, allowed researchers to describe all of the neural inputs into a region of the fly’s brain linked to learning, examine how tightly neurons are clustered in the area, and identify a new cell type.

“This is the biggest whole brain imaged at high resolution,” Davi Bock of the Janelia Research Campus in Ashburn, VA, tells The Scientist. He and...

Past studies have produced electron microscopy images with resolution high enough to reveal the wiring of the entire brain of smaller organisms, such as a nematode or a fruit fly larva, or sections from larger animals, including parts of the fly brain or a cat’s thalamus. Imaging the complete fruit fly brain “is nearly two orders of magnitude larger than the next-largest complete brain imaged at sufficient resolution to trace synaptic connectivity,” Bock and colleagues wrote in their report.

The fruit fly brain has a three-dimensional volume of 8 x 107 cubic micrometers. Imaging it at nanometer resolution is “like studying the sky with a straw,” Bock says. “You have to move the straw around to get the whole picture.”

He and colleagues used a specialized microscope called a TEMCA2, which was raised up higher off of the floor so it projected a larger image. The researchers then set up an array of cameras to capture the images projected from the microscope. With more cameras and robotics, which automated sample handling and the image acquisition process, the system moved through slices of fly brain much more quickly than previous set-ups.

Ian Meinertzhagen of Dalhousie University in Halifax, Nova Scotia, wrote in an email to The Scientist that this work “fulfills the long-held ambition to catalogue the comprehensive networks of identified neurons in the fruit fly’s brain.” It is still “a very major task [but] it is comprehensive, because no cell can hide out in the brain undetected, as has always been the case in previous approaches,” he said. “It is enabling, providing the basis to analyze the function of identified neurons within that network, and in particular enabling us to identify the contribution each neuron makes to the fly’s behavior.”

In the paper, the team used a subset of the images to describe the synaptic connections of the fly’s mushroom body, an area known for its role in learning. By studying the complete set of olfactory inputs to the mushroom body they identified a new type of neuronal cell. Unlike other olfactory neurons, this new cell type, called MB-CP2, receives inputs from other regions of the fly brain, including compartments in the protocerebrum, which harbors projections from the eyes and other organs.

Ryuta Mizutani of Tokai University in Tokyo explains that the MB-CP2 neurons may have been missed in previous studies because, in light microscopy, where the mushroom body has been studied extensively, only a certain group of neurons are labeled and visualized using fluorescent probes. In the new study, the fly brain was stained completely with uranium and lead, and the authors’ analysis seems to hit the missed neurons, he says, although more studies are needed to determine their function.

Bock’s group also found that neurons linked to the fly’s sense of smell were clustered more tightly in the calyx of the mushroom body than observed in previous imaging projects. This raises questions about whether these neurons cluster differently in individual flies, the team suggests.

The next step, Mizutani says, is the complete analysis of the whole fly brain. “If we can accelerate this painstaking task with a computer algorithm, such as automated intelligence, the complete analysis becomes realistic,” he said. The promise, he noted, is applying this study to mammalian brains, especially to humans. “Our brain is huge compared to the fly brain,” Mizutani said. “The application to a larger brain must be a big challenge.”