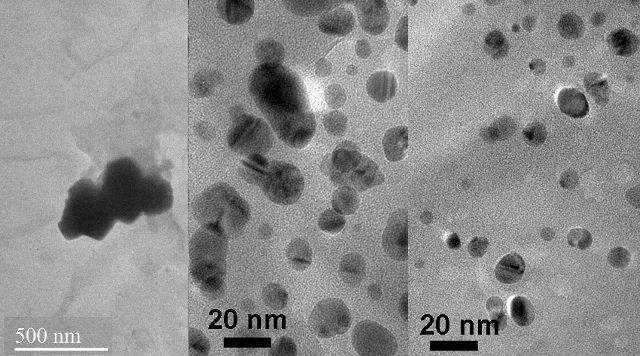 In addition to angular, endogenous magnetite nanoparticles (left), researchers found spherical magnetite particles in postmortem human brains (middle) resembling those found in polluted air (right).COURTESY OF BARBARA MAHERIn more than three dozen postmortem human brains, scientists have detected nanoparticles of magnetite that they suspect came from the environment. The brain produces magnetite particles that are associated with Alzheimer’s disease, but these endogenous particles are angular in shape, whereas the newly discovered compounds are spherical. Their shape and other properties suggest that the nanoparticles were generated during high-temperature processes like combustion.

The results, published yesterday (September 5) in PNAS, suggests that inhaled magnetite, which is known to be a ubiquitous air pollutant, can make its way to the brain. Barbara Maher, an environmental scientist at the University of Lancaster, and her coauthors now speculate that this environmental magnetite could pose a health risk.

In 1992, researchers discovered angular particles of magnetite in the human brain. Sixteen years later, a comparison of healthy and Alzheimer’s brains revealed that higher levels of magnetite correlated with the incidence of disease. Most recently, scientists studying rat neuronal cell cultures found that magnetite and amyloid-β peptides seemed to stabilize each other; the two particles together were more harmful to neurons in culture than amyloid-β peptides alone.

Maher had been studying the airborne particulate matter, including magnetite, along roadsides, and decided to examine whether that magnetite might enter the brain, where it could potentially have similar toxic effects. She and her colleagues examined the quantity and structure of the magnetite within frontal cortex samples of 37 human brains, which came from the Manchester Brain Bank in the U.K. and from people who had died in fatal accidents in Mexico City between 2004 and 2008.

Using high-resolution transmission electron microscopy, the researchers searched the brain slices. They identified endogenous, angular magnetite particles, which ranged in diameter from 50 to 150 nanometers, as well as spherical particles that ranged from less than 5 nanometers to more than 100 nanometers. The researchers believed these spherical compounds came from particulate matter in the air, Maher said.

Dobson noted that a causal link between magnetite particles of any type and neurodegeneration has not been established. However “mechanisms proposed for a potential role in neurodegeneration would be the pretty much the same for both types of particles,” he added.

Although researchers do not know if environmentally derived magnetite has the same effects as endogenous magnetite on neuron health, “it would be foolish to ignore the possibility that it could be creating an additional health hazard for humans,” Maher said.

The study “gives an explanation for the high abundance of magnetite in the brain and, in turn, points towards its connection with Alzheimer’s,” Jordi Soriano, a University of Barcelona biophysicist who has studied magnetite’s effects on neurons in cell culture and was not involved the present study, told The Scientist in an email.

He noted, however, that the researchers did not sample any brains from people who had lived in nonurban areas, which would be necessary “to prove the connection between pollution and magnetic nanoparticles accumulation and structure.” This type of epidemiological study correlating likely magnetite exposure and neurodegenerative disease is one area for future research, Maher said.