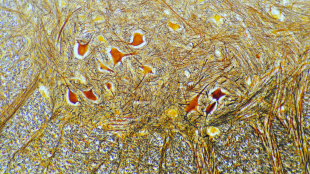 WIKIMEDIA, ZUZANNA K. FILUTOWSKAFidgetin is one of a number of enzymes that can pull apart microtubules. Other so-called microtubule-severing enzymes are known to aid in the growth of neurons. In a new study, presented today (December 17) in a poster at the American Society for Cell Biology meeting in New Orleans, researchers show that fidgetin may play a different role, putting a lid on axon growth.

They found that knocking down fidgetin in adult rat neurons caused a surge in axon lengthening. The finding “speaks to the importance of microtubule organization” during neuron growth, said Melissa Rolls, a regeneration researcher at Penn State University who was not involved in the study. “The bottom line is microtubules have to be incredibly carefully regulated during injury responses.”

Although peripheral neurons can repair themselves after being damaged, those in the central nervous system are pretty much helpless after an injury. That's...

David Sharp, one of the authors of the new study and a microtubule researcher at Albert Einstein College of Medicine, said his group wanted to see whether fidgetin is also involved in neuron growth. Sharp and his colleagues knocked down fidgetin in fetal rat neurons, and the axons of those cells grew considerably faster without fidgetin present. In adult neurons, reducing the levels of fidgetin through small interfering RNA also led to axon lengthening. “It almost puts neurons in a more nascent and plastic state,” Sharp told The Scientist.

Although it's called a microtubule-severing enzyme, fidgetin acts more like a “tubulin extractase,” yanking tubulin out of the microtubule lattice, Sharp said. It appears that fidgetin prefers to act upon deacetylated microtubules—those that are considered to be less stable. “It's constantly paring away at the more dynamic fraction [of microtubules], keeping it from expanding beyond its normal levels,” said Sharp's collaborator Peter Baas, a neuroscientist at Drexel University. “When you knock down fidgetin you get an increase in microtubule mass.”

Given fidgetin's role in tamping down axon growth, one might expect that it would be downregulated during development when the brain is growing. But the research team found the opposite: nervous tissue from rat embryos had higher levels of the protein, while adult nervous tissue contained less fidgetin.

Baas said that the results could be explained by the need for neurons to control construction. “You need to have certain brakes on the growth,” he told The Scientist, “otherwise you have an axon that can overgrow.” Fidgetin's job, perhaps, is to make sure cells don't expand out of control during development, but during the adult stage when there are other mechanisms in place to keep neurons from growing, fidgetin levels need not be so high.

“The most interesting aspect here is they find fidgetin is developmentally regulated,” said Andrew Chisholm of the University of California, San Diego. It indicates that during development, “the severing activity has to be very tightly controlled.”

Chisholm, who was not involved in the study, said he'd be interested to see mechanistically how fidgetin works in the axon as well as how a fidgetin knockdown affects neuron regeneration in vivo. There's no guarantee, he pointed out, that the regeneration seen in vitro would hold up in an animal model. Still, “given that things like spinal cord injury are still very much untreatable, I think any new lead is definitely worthwhile.”