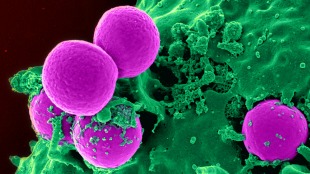 WIKIMEDIA, NIAIDFor all the myriad genome-editing tricks of the CRISPR/Cas9 system, slipping into cells by way of viral vector was previously not one of them. The gene for the large Cas9 enzyme—which originated from the Streptococcus pyogenes bacterium—maxed out the carrying capacity of vectors’ genomes. Researchers from the Broad Institute and MIT and their colleagues have now found that a smaller Cas9 from a different bacterium can do the job with ease. They described their modified approach in Nature today (April 1).

“The paper illustrates that there is more to the Cas9 world than the first characterized protein (nuclease), and that new avenues will open as the toolbox is expanded,” Rodolphe Barrangou of North Carolina State University who was not involved in the study wrote in an e-mail.

As part of a bacterial and archaeal immune response commonly referred to as CRISPR, the Cas9 enzyme cleaves a pre-specified...

The most commonly employed Cas9, measuring in at 4.2 kilobases (kb), comes from S. pyogenes. While it’s an efficient nuclease, the molecule’s length pushes the limit of how much genetic material an adeno-associated virus (AAV) vector can load up on, creating a barrier to using CRISPR in the tissues of living animals. “[AAV] is a very versatile, effective delivery vehicle, so we really wanted to adapt the Cas9 system to that,” said Fei Ann Ran, the lead author of the study and a postdoc in Feng Zhang’s lab at MIT and the Broad Institute.

Scientists had experimented with smaller Cas9s, but either they didn’t work well or they had a narrow range of target sequences. So Ran and her colleagues conducted a screen to find shorter enzymes that could efficiently chop up a broad suite of DNA sequences. They landed upon a Cas9 from Staphylococcus aureus that’s about 3.3 kb long, which they dubbed “saCas9” to differentiate it from spCas9, the S. pyogenes enzyme.

The researchers compared the performance of both Cas9s on common genomic loci. “It seems that sa and sp have similar efficiencies,” Ran told The Scientist. The team then used the new Cas9 and an AAV vector to inhibit a cholesterol gene in mice.

“What’s exciting about [saCas9] is it works really well in vivo,” said Charlie Gersbach of Duke University, who uses CRISPR to study muscular disorders but was not involved in the present study. Gersbach said he would use saCas9 for in vivo experiments.

The gene Ran disrupted, Pcsk9, is known to be involved in high cholesterol. And while Ran’s study is a proof-of-concept demonstration of saCas9, Pcsk9 is a therapeutic target, with monoclonal antibodies in human clinical trials. “It’s a very hot topical gene,” said Henry Ginsberg, a lipoprotein researcher at Columbia University who has been involved in the clinical studies. Ginsberg said impacting the PCSK9 protein would have a huge impact on people with familial hypercholesterolemia, although he cautioned that any CRISPR-based gene therapy “has a long way to go.”

Luciano Marraffini, who studies CRISPR/Cas immunity at Rockefeller University in New York City, said the researchers did a fine job developing and characterizing saCas9. “It’s not trivial to make CRISPR/Cas systems work in eukaryotic cells,” said Marraffini, who has collaborated with Zhang. “One thing is to have them in silico and have a sequence and realize they’re smaller, and another thing is to do the experiments and make it work.”

Marraffini added that additional experiments using saCas9 will determine whether it’s better than spCas9 or other enzymes out there. To aid in that endeavor, Zhang’s group shares CRISPR reagents through Addgene. “Anyone in the world now has access to this,” said Gersbach. “I’m excited to see what other people do once they have it in their hands.”