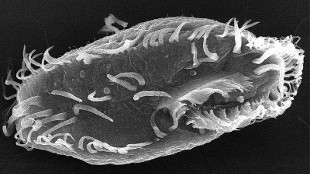 Wikimedia, Unknown SourceWhile most organisms use methyl marks on the genome to stake out gene expression, the fresh-water protozoan Oxytricha trifallax use the tags to kick junk DNA—95 percent of its genome—to the curb, according to a new study in Genome Biology published today (October 17). The finding refutes previous studies that concluded the ciliated single-cell critters—which usually carry four nuclei—have methylation-free DNA.

“It’s actually surprising that there is methylation, because it wasn't reported to be there—a lot of studies in the 80s and 90s looked for it and didn't find it,” said John R. Bracht, a postdoctoral researcher at Princeton University, and lead author of the study. “And what's kind of fun about this, is that it’s the exact same modification that you'll find in humans,” he added, “but it may be playing a different role.”

Oxytricha has a particularly peculiar life-cycle, with each organism containing two types...

Even more bizarre, Landweber added, is how the organism mates. When a cell is well fed, it will reproduce asexually, with new cells budding continuously. But, if Oxytricha runs out of food, it “mates” by swapping DNA with another Oxytricha. This act doesn’t lead to offspring, however. Instead, the cell’s two micronuclei go through meiosis to form eight haploid nuclei, two of which the cell trades with two from the other protozoan. The foreign haploid nuclei then fuse with one of the six remaining haploids to become diploid, and the rest of the nuclei (including the still diploid macronuclei) are destroyed. The new diploid micronucleus then divides mitotically to generate new macro- and micronuclei.

Once the cell is back to its normal number of nuclei (two micro and two macro), it will instruct the new macronuclei, which will be responsible for making all of the cell’s proteins, to quickly shed 95 percent of its genetic information. “In Oxytricha, it has this unique aspect of gene regulation,” Landweber said. “In order to shut off a gene, it doesn’t just shut it off, it throws it away.” But how it does this was a mystery.

Although previous studies had failed to identify any methylation in the Oxytricha genome, Bracht had a hunch that it still might exist and be involved in the DNA disposal, which meant that timing was critical. “I was aware of the earlier reports, but I went in with more sensitive techniques and was looking at the right time,” he said.

He focused on the mating cycle, pausing cells shortly after they’ve acquired their new sets of nuclei. He treated the cells with glowing methylation-specific tags and saw both nucleus types glow. He followed up with mass spectrometry to confirm the location of the methyl tags, and found that they appeared only on the junk DNA that is eventually discarded. The finding suggests that Oxytricha uses methylation to flag the DNA in new nuclei that it wants ejected.

“It’s a landmark that pushes the field further,” said ciliate researcher Wei-Jen Chang of Hamilton College, although he was less surprised by the existence of methylation in this genome than Bracht. “It’s great that somebody figured it out.”

But many questions remain including how methyl tags lead to the removal of DNA from the nucleus. Furthermore, it’s unclear how Oxytricha adds methyl groups to DNA in the first place. The genome sequence of the ciliate lacks any obvious homologues to genes that encode methyltransferases, the enzymes responsible for methyl tags.

Given the unique genetic and biological tactics used by Oxytricha, “we’re keeping an open mind that there might be a new means via which it methylates its DNA,” Landweber said. “But, I would add caution to the claim that it doesn’t have a methyltransferase,” she added. “It doesn’t have a discovered one yet, but it doesn’t mean it doesn’t have one.”

“My guess is that we missed it,” Chang agreed—“either that the genome project didn't recover that piece or it went undetected for some reason.” But, he added, an alternative mechanism would be very interesting.

While Bracht sets out on new phylogenetic and biochemical hunts for the missing enzyme, he can only speculate on the interesting alternatives that might be—and what they might mean for our understanding of epigenetics. “What is this telling us about methylation biology?” he asked. “Maybe there’s a new kid on the block.”