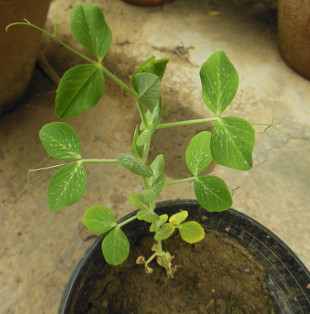 WIKIMEDIA, HITROMILANESEGiven a choice between two possible outcomes (one risky, one not), most people take risks only when the stable option does not provide what they need. When the stable option is sufficient, on the other hand, most people tend to be risk-averse. Humans and other animals have long behaved this way, according to risk-sensitivity theory. And, as researchers from the University of Oxford and their colleagues reported in a study published today (June 30) in Current Biology, some plants apparently behave this way too.

The team took pea plants and split their roots among two pots. Both pots contained the same average levels of nutrients, but while nutrients in one pot remained at a steady level, nutrients in the other pot varied over the course of the three-month experiment. After three months,...

In terms of risk-sensitivity theory, Kacelnik said, “they did exactly what was expected from them.” In fact, he added, “the plants have behaved even more clearly, with respect to risk, than we actually have found in animals.”

In 2013, Kacelnik and Oxford’s Claire El Mouden reviewed studies on risk sensitivity in animals, finding that the theory was supported by around half of the literature they examined. This variability, Kacelnik explained, could come from animals’ imperfect assessments of their circumstances, or from researchers’ errors in determining breaking points in situations.

Or the theory itself could be flawed, University of Minnesota behavioral ecologist David Stephens once feared. “After reading El Moulden and Kacelnik, I was pretty convinced that I had wasted my youth on a failed idea,” he wrote in an email to The Scientist.

The present study, however, lends support for the theory. “Not only does it seem to support the predicted switch from risk-avoiding to risk-taking, it [also] shows this ‘behavior’ with pea plants; not really anyone’s top candidate for cognitively-advanced organism of the year,” added Stephens, who was not involved in the work.

To determine what pea plants might consider “low” nutrient levels, the researchers first measured the relationship between nutrient concentrations and seed growth. This way, “the authors were able to estimate the point where plants should take the gamble,” Sarah Heilbronner, a postdoctoral fellow at the University of Rochester Medical Center who studies decision-making but was not involved in the work, wrote in an email to The Scientist. “And in fact, roughly, this is what happened: with lower mean nutrient levels, plants were more likely to ‘gamble.’”

“To demonstrate [risk-sensitivity theory] in an ‘animal’ that doesn’t even have a brain is a very strong demonstration that the problem is not the intellectual capacity of the subjects; it’s that sometimes we don’t create the conditions that the theory requires,” Kacelnik said.

Such theories for determining biological optima “are important because they tell us what organisms are designed to achieve,” he wrote in a follow-up email. “But the mechanisms for achieving them may be psychological in humans and other animals, and purely physiological in plants.”

Heilbronner agreed. The study, she said, “should make us reconsider the types of very basic processes, whether neural or not, that can allow organisms to adjust their behavior according to risk.”