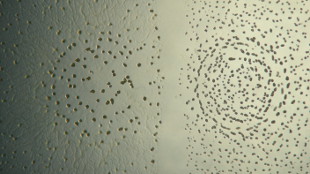 M. xanthus fruiting bodiesFRANCESCA FIEGNAKin discrimination, in which an organism favors genetically related individuals over non-related individuals in social behaviors, can emerge among related bacterial strains that evolved from a common ancestor and were cultured under different laboratory conditions, according to a study on the social bacterium Myxococcus xanthus published today (July 6) in PNAS.

“Often when we see these kinds of social incompatibilities, or greater cooperation between close relatives than between strangers, it’s interpreted in the context of kin selection theory, which posits that cooperation—at least within species—will evolve when there’s preferential interactions that occur between relatives that share genes for cooperation,” said Gregory Velicer of ETH Zürich, who led the work. “[We have found that] reduced cooperation between different types can arise not because of any selection for incompatibility, per se, but rather simply because you had these different complex social systems evolving independently of...

Under certain conditions, genetically identical colonies of M. xanthus swabbed on opposite ends of an agar plate grow toward one another, merging to form a single colony. But as Velicer and his colleagues found in a previous study, some samples of M. xanthus collected from a small area of soil did not grow together on agar plates; rather, they bumped up against one another other in the center of the dish, or, in some cases, they approached one another but did not quite touch, leaving strips of bare—or sparsely populated—agar between them.

More recently, the researchers observed a second kind of kin discrimination. On nutrient-deficient agar, starving M. xanthus colonies form fruiting bodies, which release hardy spores that can withstand harsh conditions and be reactivated when nutrients are more readily available. In experiments in which two colonies that were genetically identical—save for a genetic marker—were swabbed onto a nutrient-poor plate, the resulting fruiting bodies were often chimeric, containing cells originating from both colonies. In contrast, fruiting bodies from genetically dissimilar colonies remained separate and were rarely chimeric.

“Many diverse organisms, including animals, fungi, bacteria, and protozoans, exhibit kin discrimination,” Elizabeth Ostrowski, who studies kin discrimination in social amoebae at the University of Houston but was not involved in the work, wrote in an e-mail to The Scientist. “Despite being common, it is unclear whether these abilities are adaptations that act to limit cooperation to close relatives (who share and thus pass on the same genes) or whether they evolved for some other function and only incidentally have these functions.”

Evolutionary biologist Owen Gilbert, a visiting researcher at the University of Texas at Austin who also was not involved in the work, described theories of kin discrimination as having “a long history of confusion.”  Researchers’ opinions on whether such behavior should be considered an adaptation are divided. One common hypothesis for the evolution of kin discrimination in bacteria is that such behavior could help prevent cheating, wherein one strain benefits at the expense of another during a cooperative process.

For the present study, Velicer’s team set out to test whether kin discrimination could arise not as a result of competition between different bacterial strains, but independently between populations derived from a common ancestor and grown in isolation under different conditions. The researchers sampled from two cultures of M. xanthus that were genetically identical, save for a marker gene, and cultured them under 12 different conditions—variable agars and environments. The samples were left to grow on their respective plates for two weeks before the researchers transferred each sample to a new plate to repeat the process 18 or 40 times, depending on the environmental conditions.

“We often think of [organisms that show kin selection] as having a very similar strategy,” said Rafael Rosengarten, a postdoctoral researcher who studies kin discrimination in Dictyostelium in the lab of Gad Shaulsky at Baylor College of Medicine, in Houston, Texas. “This study almost makes it seem like there really isn’t a strategy.”

Rosengarten cautioned that different species may have different methods of kin discrimination and that what applies to one system may not necessarily apply to another. And he noted that one gene, traA, pinpointed as a key M. xanthus kin discrimination-related gene in a previous study, was not found to be mutated in any of the kin-discriminating strains in the present study. Furthermore, in the present study, strains with the same traA alleles were found to be incompatible, calling into question the idea of traA as a compatibility marker.

Whether kin discrimination is a true adaptation remains up for debate.

“The kin discrimination phenotypes could have been directly selected for and thus could be adaptations to the environments in which they arose,” Ostrowski said of the study. “But I agree that [the authors’] ‘byproduct’/indirect selection explanation seems more parsimonious.”

“Their main point,” she continued, “is that we need not invoke direct selection to explain traits, even when they seem—at first glance—to be complex adaptations.”