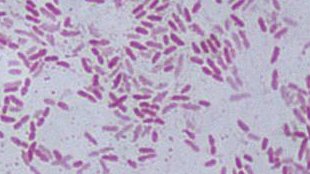 Pseudomonas fluorescensWIKIMEDIA, RIRAQ25Bacteria that lack a vital protein for growing flagella—tail-like structures that enable the microbes to swim—can attain flagella in as little as four days given enough pressure to evolve, according to a paper published in Science today (February 26). Furthermore, this fast fix evolves in nearly the same way in each independent strain: through the repurposing of a distantly related protein.

“This is a fascinating set of evolution experiments,” wrote evolutionary biologist Richard Lenski of Michigan State University in an e-mail to The Scientist. “Their experiments show how a biological function—in this case, flagellar motility in Pseudomonas fluorescens—can re-evolve after the deletion of a seemingly critical gene. The bacteria regained motility not by reacquiring the lost gene . . . but instead by mutations in other genes that put their products to new uses.”

There are still some big unanswered questions about evolution, such as...

Johnson and her colleagues have now discovered, however, that not only can giant evolutionary leaps happen, but they can do so in a reproducible way. Interestingly, the team didn’t set out to study such profound, long-standing questions. Rather, she said, the investigations came about because PhD student and coauthor Abdullah Alsohim “made a bit of a mistake.”

Alsohim’s original project had been to investigate how a lack of flagella impacts the ability of the soil bacteria P. fluorescens to colonize plant roots and help the plants grow. The bugs had been engineered to lack fleQ, which encodes a key transcriptional regulator of flagella genes. But “he left the plates to incubate much longer than intended, and [the bacteria] began to swim again,” said Johnson. “We were startled.”

There was another shock to come: each bacterial strain that regained its swimming ability—first slow, then fast—did so via essentially the same evolutionary process. The team sequenced the genomes of different slow- and fast-swimming strains and discovered that all of the slow swimmers had mutations in genes that would directly or indirectly increase expression of a nitrogen regulatory protein called NtrC. Furthermore, all of the fast swimmers had mutations in the gene for NtrC itself.

NtrC shares 30 percent amino acid identity with FleQ, suggesting the proteins may be able to minimally cross-react with each other’s target genes. Sure enough, the researchers determined that the initial mutations, which ramped up NtrC levels, enabled a minor upregulation of FleQ’s target genes. The second mutations to NtrC itself then improved the protein’s interaction with the FleQ targets, boosting their expression, and the bacteria’s ability to swim.

The results highlight the importance of gene duplication in evolution, said Hughes, and the ability of the resulting diverged proteins to “moonlight” in roles aside from their main function. Indeed, said Jeff Barrick of the University of Texas in Austin who was not involved in the work, such cross-talk gives organisms “greater robustness,” allowing them “to restore a function even though they are missing a genetic part.”

But while the re-evolved flagella enabled the bacteria to access food supplies at the farthest reaches of the Petri dish, the ability came at a price. “The bacteria that became much better at swimming were much worse at nitrogen regulation,” said Johnson. However, she added, “sometimes the advantage can be so great that it’s worth paying that cost because otherwise you die.”