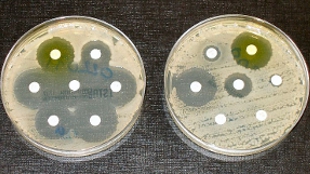 WIKIMEDIA, GRAHAM BEARDSPopulations of Escherichia coli grown in the lab quickly evolve tolerance when exposed to repeated treatments with the antibiotic ampicillin, according to a study published today (June 25) in Nature. Specifically, the bacteria evolved to stay in a dormant “lag” phase for just longer than three-, five-, or eight-hour-long treatment courses, before waking up and growing overnight until the next round of treatment began.

“I was very surprised that the bacteria are able to modify their lag time just as much as they need to,” said microbiologist Tom Coenye of the Laboratory of Pharmaceutical Microbiology (LPM) at Gent University in Belgium, who was not involved in the research.

The study highlights the importance of antibiotic tolerance, which allows bacteria to survive even high levels of antibiotics by remaining dormant, Coenye added. Researchers and clinicians may be quick to assume than an unsuccessful antibiotic treatment failed as...

“This is very interesting [and] definitely a step in a new direction,” agreed microbiologist Kim Lewis, director of the Antimicrobial Discovery Center at Northeastern University in Boston, who also was not involved in the study. “So far we’ve been familiar with tolerance conferred by dormant persister cells. This is a new phenomenon, extended lag, where mutants have a longer lag time, and that extended lag allows them to survive an attack by antibiotics. There are definitely interesting potential implications for medical treatment, [though] we do not yet know whether there are clinical isolates of extended lag mutants.”

To gain a better understanding of how bacterial populations might evolve to tolerate antibiotic exposure, Nathalie Q. Balaban, a microbiologist and physicist at The Hebrew University of Jerusalem in Israel and her colleagues exposed cultures of E. coli to high concentrations of ampicillin for three, five, or eight hours, then washed the drug away and suspended the bacteria in fresh media to be grown overnight. The next day, the team repeated these treatments.

“We continued the experiment for about a month, but already in 10 cycles we could see that tolerance had evolved,” Balaban said. Indeed, while the ampicillin treatments killed more than 99.9 percent of the E. coli, by day 10, bacterial survival had increased 100-fold.

Because the bacteria were as susceptible to ampicillin as the ancestral strain when treated at a different time point in the daily cycle—when they were actively growing—the researchers knew that they had evolved tolerance, not resistance. “If we wait to populations to start growing, then they are not protected by this dormant state,” said Balaban.

Moreover, the bacteria were also tolerant to norfloxacin, an antibiotic with a different mechanism of action than ampicillin but also ineffective during the dormant stage, further supporting the idea that the E. coli populations had evolved to tolerate certain durations of antibiotic exposure. “This is characteristic of tolerance,” said Balaban. “The bacteria that have evolved tolerance under ampicillin are also more tolerant to this completely different class of antibiotics.” Resistance, on the other hand, is usually class-specific, she noted.

Exploring the genetic basis of this adaptation, the researchers identified three genes that seemed to play a functional role in antibiotic tolerance. While the exact mechanism of how mutations in these genes may have lengthened the bacteria’s lag time is not yet known, two of the genes are part of pathways that were previously implicated in bacterial persistence, including an antitoxin in a common toxin-antitoxin module that may help regulate that bacteria’s growth.

“The way the toxin-antitoxin module is built, [there are] two entities that interact strongly with each other,” said Balaban: the toxic stops the cell from growing, until the antitoxin accumulates to high enough levels to neutralize the toxin. Although it remains to be experimentally demonstrated, this system could serve as an ideal lag-time adjuster. “If you alter the balance of toxin-antitoxin, bacteria stop growing for certain periods of time.”

To understand the clinical relevance of such tolerance, researchers must now determine whether bacteria with extended lag times are found in clinical isolates. Current standard clinical assays simply measure the minimal concentration of antibiotic required to prevent cells from growing, Lewis said, which can identify antibiotic resistance, but not tolerance. “That test will simply miss extended-lag mutants.”

But testing for bacteria with extended lag time is not difficult, he added. “Now how that information is useful for treatment, that’s a challenging question because right now we do not have good drugs that kill tolerant cells.”