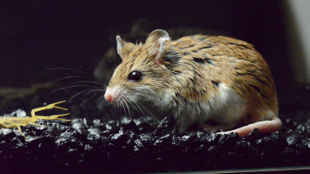 A southern grasshopper mouse appr oaches and prepares to attack an Arizona bark scorpion. COURTESY OF MATTHEW AND ASHLEE ROWEGrasshopper mice of the southwestern US deserts (Onychomys torridus) have evolved to take advantage of a normally well-protected food source: the Arizona bark scorpion (Centruroides sculpturatus), which produces a toxic, pain-inducing venom that deters most predators. Thanks to a few amino acid changes in a pain-transmitting sodium channel, however, grasshopper mice can consume the venomous arthropods while feeling little or no pain from their sting, according to research published today (October 24) in Science.

“The grasshopper mouse has found a way, very cleverly, to disconnect the pain pathway,” said neuroscientist Thomas Park of the University of Illinois at Chicago, who was not involved in the research. Importantly, he added, this pain resistance is specific to the venom; the mice are still able to feel pain...

Evolutionary neurobiologist Ashlee Rowe began studying the grasshopper mouse and its bark scorpion prey as a graduate student at North Carolina State University. Early on, she noticed that the mice seemed to be resistant to the scorpion’s sting. “The venom seems to have absolutely no effect whatsoever,” said Rowe, who is now an assistant professor at Michigan State University. “They groom a little bit, but that’s it.” Given human reports of how extremely painful such stings are, and evidence from other mammals that do appear to experience pain from the stings, this was a surprise.

So Rowe took her work with her to complete a postdoc in Harold Zakon’s lab at the University of Texas at Austin, where she delved into the molecular mechanism underlying this pain resistance. She teamed up with Yucheng Xiao and Theodore Cummins at Indiana University School of Medicine to explore the role of two known sodium channels, Nav1.7 and Nav1.8, that are found on pain-transmitting neurons called nociceptors. Rowe dissected the neurons from the dorsal root ganglion just outside of the spinal cord and sent the tissue samples, along with a sample of the venom, to Xiao and Cummins, who recorded the sodium currents in vitro. As expected, the researchers found that the venom elicited responses from the nociceptors of the house mouse, but not of the grasshopper mouse. Based on previous work, the researchers surmised that the venom bound and activated Nav1.7 in both species, but their new data suggested that it also inhibited the activity of the Nav1.8 channel in the grasshopper mouse, thus blocking the propagation of action potentials through the nociceptors.

The results suggested that rather than blocking the binding of the venom altogether, the grasshopper mouse had evolved a strategy to block the transmission of pain when the venom was bound. Sure enough, when the team pre-treated the mice with venom, and then administered a painful formalin stimulus, the mice were protected from the pain. These findings raise the possibility that perhaps the Nav1.8 channel could be targeted for new analgesics, Rowe pointed out.

Indeed, some local anesthetics already modulate sodium channel activity, and the Nav1.8 channel in particular has been linked to certain kinds of neuropathic pain that are resistant to traditional analgesics, said pharmacologist Juliano Ferreira of Federal University of Santa Catarina in Brazil. Thus, Nav1.8 is already “an important target for the development of novel analgesic drugs,” he wrote in an e-mail, and the identification of amino acid variants in the grasshopper mouse channel may “bring new ideas to treat scorpion envenomation as well as human pain disorders.”

To further investigate how the scorpion venom inhibits the transmission of pain, Rowe and her colleagues sequenced the Nav1.8 channel, replaced grasshopper mouse sequences with house mouse sequences, and expressed the mutant channels in a cell line to observe the effects of the genetic changes. They first narrowed down the responsible region of the channel to the second transmembrane domain of the protein, then further homed in on two amino acids within that domain: glutamine and glutamic acid, which appeared in opposite locations in proteins of the two mouse species. When those two amino acids were reverted to the house-mouse order in the grasshopper-mouse ion channel, the blockade was eliminated. Even just switching out the glutamic acid could prevent the block.

The results demonstrate that “a really small amount of variation—one amino acid—can actually produce these really profound physiological effects,” Rowe said. “Evolutionarily speaking, it allows this mouse to then feed on a chemically protected scorpion.”

Park and his colleagues had previously found a very similar phenomenon in the naked mole-rat, which is resistant to acid-induced pain, such as the pain that would be caused by the high concentrations of carbon dioxide in their underground habitats. “Instead of trying to stop the receptors from doing their job, they simply stopped the nerve cells from being able to transmit the signal,” said Park. “[It is] really super cool . . . that two remarkably distantly related mammals would target the same strategy for disabling a specific kind of pain,” he added, noting that he expects more examples of this phenomenon to begin popping up in the literature. (For more on the naked mole-rat, see Park’s June 2012 feature story “Underground Supermodels.”)