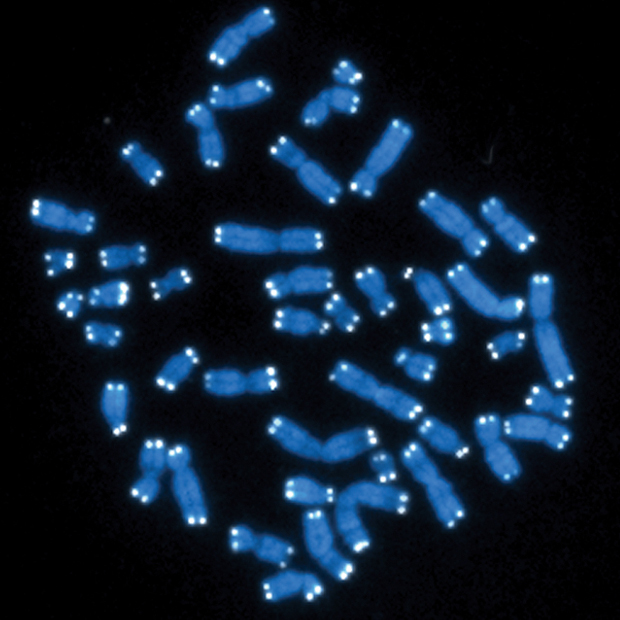 “The novelty and merit of this work is that the authors demonstrate, for the first time, that [telomere transcription] occurs in response to physical exercise in a physiological system—human muscle,” Claus Azzalin, who studies telomere transcription at ETH Zurich in Switzerland but was not involved in the work, wrote in an email to The Scientist.

“This is a new link between metabolism and telomeres,” said study coauthor Anabelle Decottignies of the de Duve Institute in Brussels, Belgium. “We were able to show that metabolism, in the form of exercise, can...

Telomeres were thought to be transcriptionally silent until several years ago when researchers found that mammalian telomeres, including human ones, are readily transcribed into telomeric repeat–containing RNA (TERRA). These RNA molecules have been shown to associate with telomeres but whether and how TERRA can protect telomeres— the repetitive sequences at the ends of linear chromosomes that form a sort of aglet to protect the structures—or promote the lengthening of the ends of chromosomes is not yet fully understood.

“Finding new TERRA regulators is essential to decipher the multiple roles of this RNA,” noted Azzalin, one of the researchers who initially identified TERRA transcription.

Decottignies and colleagues first analyzed human telomeric sequences for potential transcription factor binding sites. The researchers identified a potential binding site for the transcription factor nuclear respiratory factor 1 (NRF1), then confirmed its ability to bind the ends of chromosomes in human cancer cell lines. Because NRF1 is activated when stores of ATP are depleted, as during exercise, the team next enlisted 10 young and healthy volunteers to a low- or high-intensity workout on a stationary bicycle for 45 minutes. The researchers took muscle biopsies and blood samples prior to, right after, and 2.5 hours after the exercise. TERRA levels were increased 2.5 hours after both the low and high intensity workouts and were highest after the high intensity exercise, the researchers found.

According to Decottignies, this is the first evidence that telomeres are transcribed in non-dividing human tissue. Exercise produces reactive oxidative species (ROS) that may damage telomeres. Her team is now addressing the hypothesis that the TERRA molecules produced from NRF1-dependent telomere transcription may act as scavenger molecules that react with the ROS, protecting the telomere itself from oxidation.

The work has potential implications for the role of telomere transcription in aging, according to Azzalin. “The implications of this work could be major since TERRA is a potential therapeutic target to promote healthy aging,” Azzalin wrote.

For Carol Greider of the Johns Hopkins Institute for Basic Biomedical Sciences, a corecipient of the 2009 Nobel Prize in Physiology or Medicine for the discovery of telomerase, many questions remain on the role of TERRA at telomeres including its actual biological effects.

“This is a correlative study that suggests NRF1 transcription factor modulates levels of TERRA in human cells,” Greider wrote in an email to The Scientist. “As it is not yet established what role TERRA plays at mammalian telomeres, it is premature to speculate on the effect of NRF1 and TERRA upregulation in exercise on telomere biology or aging,” she added.